You are here: Home / 2014 / November / Naomi Klein: everyone will be affected

Would there still be safe havens if the sea level starts rising as a result of the greenhouse effect? For the time being, people will be relatively safe in industrialised countries. Even in low-lying countries like the Netherlands, that will be able to defend itself to rising sea levels for quite some time. Elsewhere, the defence of the deltas will be more difficult, leading to major floods. But in the end, everyone will be affected. 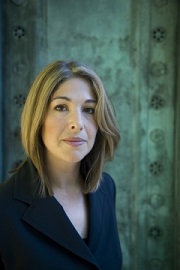 By now, it should be clear that we will run into great difficulties. Naomi Klein’s recent book on the climate crisis and our lack of resolve – and perhaps inability – to deal with it effectively, clearly outlines the reluctance of the powers that be, politicians and major companies, in particular the fossil corporations that mine coal, oil and gas. These are her main enemies. In particular if they mine coal, oil from tar sands, or shale gas. Because there is no end to their ‘extreme extraction’ of fossil fuels, causing enormous emissions of CO2 that lead the world to the brink of disaster. A fascinating book that clearly depicts the actual situation and the problems to come if we would not come to grips with the climate effect. ‘Stop using fossil fuels’ is her well-documented message; but in many panels – like a recent one on Dutch TV – politicians, energy corporation CEOs and economists argue that we cannot do that just like that. That it might be a life-saving proposition, but that sustainable energy and energy conservation will not be able to cover our needs for a considerable time to come.

Naomi Klein takes opposition to those ideas. New green and mild technologies can both supply us with CO2-free energy and create new employment. If we just would choose that option. That does require some effort. Like that we (institutional and other investors) stop supporting the fossil sector and invest in sustainable energy and clean technologies. She calculated that the world should invest $ 2 trillion yearly for quite some time, in order to cut back CO2 emissions to an acceptable level and achieve this ‘Great Transition’. Those two trillion would require: a financial transaction tax on stock transactions (650 billion), closing down all tax havens and taxation of all capital stored there (190 billion), a billionaire’s tax (46 billion), reduction of all military expenditures by 25% (325 billion), a CO2 tax of $ 50 per ton in industrialised countries (450 billion) and cutting down all subsidies on fossil fuels, redirecting them towards sustainable energy (775 billion). This nicely sums up that society will have to change radically if we should ever wish to carry out this program. In order to grow into a small-scale, bottom-up, regionally organised society that will use mild sustainable technologies in all its sectors. Over the top? I do not think so.

We will all have to participate

The panel on Dutch TV, and almost everywhere else, was willing to think along these lines, but shied away from the radical policies required, which it almost thought to be impossible to achieve. ‘People will only start to drive electric if they are rewarded for it’, was the remark that revealed all about our present willingness to be honest about our predicament. Only if and when people will see that the existence of mankind as such is at stake, will we be prepared to take measures. The main difference with the past is that we can no longer solve problems nationally or regionally, or shift the burden upon others. Thanks to globalisation this will no longer be possible. We will all have to participate. But many policy makers and scientists do not really believe that the world is ready to make the green U-turn yet. Rather, they foster desperate measures like introducing sulphur dioxide in the stratosphere in order to block the incidence of sunlight.

Naomi Klein: ‘This Changes Everything’. This is her third book, in which she blames globalisation (No Logo) and pirate capitalism (Shock Doctrine), in close cooperation, for the climate crisis.