The biobased economy is a practical matter: the efficient production of chemicals and materials from agricultural products and agricultural waste. But there is a lot of movement at the scientific rims of biotechnology as well: researchers try to get a better understanding of processes in living nature. Jan van Hest, professor at Radboud University Nijmegen gives some insight in bioorganic chemistry. 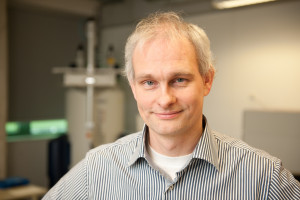 Synthetic biology used to be called gene technology; this scientific branch works top-down from the cell. Chemical biology on the other hand works bottom-up from the molecule. Both research areas gradually develop common ground and in some instances overlap already. Synthetic biology tries to remove (for certain goals) ‘useless’ properties from the cell, and tries to establish what the cell basically needs to keep on going. In fact, in this way researchers try to construct synthetic life; they do so by keeping intact as much as possible the ‘hardware’ of the cell, and supply it with new ‘software’ by disabling some genes and introducing others. And then research what that cell can still do, and if it performs the tasks envisaged by us.

‘Very smart work,’ says Jan van Hest, professor in bioorganic chemistry at the Institute for Molecules and Materials of Radboud University Nijmegen. I envisage that eventually we need approximately 150 genes for production of the proteins needed to keep a cell going. Then, we can add other proteins – comparable to the way in which we decorate a Christmas tree – in order to arrive at a cell, or a bacterium, that does exactly what we want. That is more or less what the new fermentation will eventually look like in the biobased economy. Allowing us to make chemical products, using very precisely construed and programmed bacteria. By that time, we will have gained much more insight in natural processes, and will be able to increase appreciably the yield of the biotechnological process. This is the most developed and productive side of synthetic biology. Many companies already have such bacteria, called plug bugs, that can do such fermentation processes for them.’ 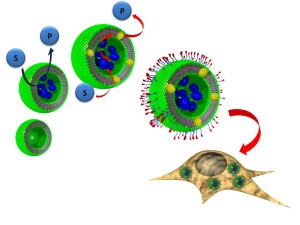 Schematic representation of  different levels of research into processes in living cells.

Holy grail
Jan van Hest himself is more active in the branch of chemical biology that tries to gain a better understanding of processes in the living cell, and constructing or changing a new living cell along that route; without manipulating the genes, as synthetic biology does. ‘Chemical biologists do so for instance by constructing small molecules that can switch on and off certain processes in the cell. Not through genes, but through small proteins. And we look for small molecules that attach themselves specifically to the active side of proteins. Activity based profiling, as we call this method, is particularly used in production of new medicines. Chemical biologists also increasingly learn how to control chemistry in living organisms. A good example is the work with small protein molecules that can couple proteins, sugars and fatty acids with non-natural components in the human body. We introduce reactive elements in the cell through smart methods. Then, we establish the position of these elements by using very selective probe molecules. We apply this technology, for instance, to the sugar mantle that encapsulates cells. That mantle changes in time and composition in certain conditions, like illness. In this way, we can perform controlled chemical reactions in the cell, using the coupling with the aforementioned protein molecules. One step further is that we can use artificial DNA (we call it XNA, which has another coupling between nucleases than by the intermediate of phosphates) as an alternative to DNA. It is an example of the way in which synthetic biology and chemical biology develop common ground at a fundamental level; and of the way in which researchers increase knowledge on the cell and molecular levels and on biotechnological processes, adding to our insight in the biobased economy.’