You are here: Home / 2013 / October / The third way between panic and complacency

A week after IPCC’s publication of the summary of its latest report, EFIB started, the European Forum for Industrial Biotechnology. We feel that sustainability is an important driving force for the biobased economy, and hence we wondered how biotechnological companies treat this issue. The answer is: well… very diverse. Some companies have an excellent track record in sustainability, many perform quite mediocre. 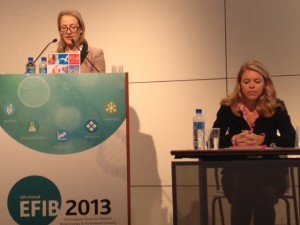 Two of the organisers of EFIB, Joanna Dupont-Inglis and Nathalie Moll, both from EuropaBio.

EFIB’s opening session in Brussels witnessed two splashing presentations of Belgian (i.e. European) companies which are totally committed to sustainability: Galactic and Ecover. Companies for which sustainability is in their core business, and that show spectacular growth as well. Heinz, Procter&Gamble and other major companies that then took a seat in a forum discussion, looked very pale in comparison to them. Even though the lady from P&G recognised right away that Ecover was way ahead of them. But without a trace of irony, they talked about a strategic plan calling for a 20% reduction in footprint in 10 years’ time. Complacency radiated from the stage. Confronted with that, we were lectured about the trouble they have within the company to get sustainability higher on the agenda.

Against complacency
Contrast to that the IPCC findings that even after 25 years of talking, we are still on the business-as-usual scenario concerning CO2 emissions. Neither international negotiations nor public opinion have been able to result in the slightest fall-back in the trend. Recognising that fact is not a call for panic because (sea) water would be over our heads tomorrow, but it is a powerful argument against any form of complacency.

In the polarised discussion on climate change, adversaries now exploit the argument that world temperature has not risen in the past decade. That may be true, but the argument is non-scientific because every serious climatologist will take into account at least thirty-year averages in order to come to conclusions on climate trends. And this thirty-year trend still clearly shows a temperature rise. The temperature plateau will have to continue for at least another decade before we could talk of a new trend. Proponents now feel obliged to stress that some very serious phenomena are still in the offing, as a continuous rise of sea levels, more than previously expected.

Against panic
It is most unfortunate that proponents of policies to counter climate change feel obliged to express themselves in ever harsher terms on climate effects, thinking that they in this way they would be more convincing; and that in that spirit, the ‘lack’ of further temperature change could be seen as a ‘weakness’. In that vein, they get closer and closer to preaching panic. On the contrary, we should be glad that – for reasons so far unknown to us – nature allows us some delay in which we could get our act straight.

But alarmingly enough, Tertium – a Dutch company that investigates public opinion on the biobased economy – finds that most people are quite willing to do something for sustainability, but rather not as a consumer (pay more for sustainability) or at work (confront the boss with his footprint). Precisely the two most effective methods available. Small wonder that many major companies feel quite comfortable with business-as-usual, they are not really challenged.

But business-as-usual is no longer an option. We can by now safely dismiss any reasoning that tries to downplay the effects of climate change as a form of short-sightedness. Therefore, we will have to move forward forcefully on the only pathway that holds under scrutiny: emission reduction. And pay more attention to where and how we work, and to where we go shopping.