At the European Forum for Industrial Biotechnology (EFIB) this week, the stall of the Biorenewables Development Centre served freshly pressed orange juice. At the front of the stall, a large bin with orange peel attracted the attention of the visitor. On purpose, as it appeared. The team from York wanted to highlight their project to produce high value chemicals from orange waste. 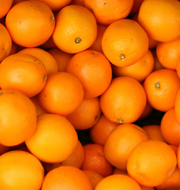 Orange peel is a side product, produced in large quantities in bars all around the world that serve freshly prepared orange juice. Almost all orange peel is discarded. If it ends up in landfills, it will contribute to the production of greenhouse gases like methane. At best it is incinerated for electricity production, or serves to produce compost. It is estimated that, in Brazil alone, eight million tons of peel waste is discarded every year. But the Biorenewables Development Centre (BDC) in York develops pathways to produce high value chemicals from food waste like orange peel. Researchers at the Green Chemistry Centre at the University of York have shown that microwave treatment of the peel releases chemicals like lemonine and terpineol, used in flavours, fragrances, food and medicines. Further steps can produce other components like succinic acid, used in the manufacture of antioxidants, bio-plastics, surface coatings and biofuels. These processes have been developed at a lab scale and are now being scaled up in BDC’s modular processing facilities to a level that is relevant to industrial application.

‘Obviously, the majority of orange peel is not produced in York,’ says director Joe Ross. ‘Although we are regionally based, we develop this technology for application in major cities. In this way, we develop commercial pathways for biobased companies and contribute to a reduction of greenhouse gas emissions.’

Processing food waste to high value chemicals is one of the major research subjects in York. Other waste streams researched include coffee grounds and waste streams from microbreweries. Food waste is a vast area with an enormous potential for producing compounds we need for better living.

- Faulty connections: there could be problems with the wiring. A faulty or loose connection could result in low power output. You can troubleshoot your wiring system by checking them at various points using a multimeter. #solarisgreentechhub #sustainability #renewableenergy

𝐒𝐮𝐬𝐭𝐚𝐢𝐧𝐚𝐛𝐥𝐞 𝐫𝐨𝐚𝐝𝐬 🛣️ As #floods and #droughts increase in frequency, the #IADB wants to seize the opportunity to close the #infrastructuregap, investing in #sustainable #roadways. #tidings #deheza #closingthegap #infrastructure deheza.co.uk/sustainable-ro… via @deheza

Another creative December day in Room 9. Plenty more to come before the holiday arrives, but here's a peek at our Christmas Corner so far... #sustainability #recycle pic.twitter.com/nRc5J4BtAq

My latest @IndustryWeek column, on how #IoT Devices Are Changing the Global Emissions Game (a win-win for bottom line AND environment!) #globalwarming #sustainability industryweek.com/technology-a…

Did you know that, in addition to improving your software’s resilience and #flexibility, #microservices can also support your #sustainability goals? Learn more about this in this Forbes article by our CTO, Claus Jepsen. bit.ly/3WIl3bM #Unit4 #ERP #BusinessSoftware