Once, Dutch Lagerwey wind turbines were the best and most innovative, but did that lead to a major wind turbine industry? No, that branch is in the hands of the Germans and Danes. And solar energy? The Netherlands were among the top in innovation, knowledge and technology, but do the Dutch now have a fair share of the market? No, although there is still much knowledge development in this field. And innovation in industrial biotechnology? In spite of the commonly acknowledged strong position in agricultural and horticultural, and catalytical knowledge, there are signs that innovation in this field will not come about in the Netherlands. 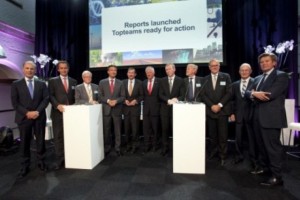 Figureheads of the top sectors in 2011. The promised action hardly materialized.

The general mood at meetings in the Netherlands is making a turn. At first there was enthusiasm, ‘Finally an area in which nothing can go wrong’ and ‘We are so good at this, we are going to succeed’, ideas that I ran across anywhere at gatherings of representatives of the biobased economy; but now a negative mood starts to prevail. And why? Mainly because of government spending far too little on research policy on the one hand, and mounting an ever expanding bureaucracy on the other hand. An example which unites both complaints: recently I wrote about the very meagre € 6 million, intended for research by SMEs in the biobased economy, and about the vast number of rules to which those small companies have to comply for scraping in a minute amount of money for very specific and narrowly defined goals. Reports, commissions, meetings. Money, too little, and awards, too late. Red tape everywhere.

A quagmire of regulation
We reported on the minute amount of money available, right at the start of top sector policy in 2011: money coming out of industry’s own pockets. The logical outcome of a process in which government first transfers all funds from natural gas revenues, intended for innovative research, to pay off public debt, and then happily presents a new policy. Even that could have worked if the remaining small sum would have been devoted to good innovative options. But it got stuck in a quagmire of regulation and conflicting interests. This does not merely hold true for the biobased economy (the area that I know best and in which I have most conversations), but for all the other top sectors. I understand that the relationship between the ‘figureheads’ of these top sectors – are captains of industry the right people to lead innovation by the way – and the minister are becoming more and more tense. There was a joke on the Ministry of ELImination (when it was still called EL&I).

This might be a national Dutch problem; the Netherlands might be too small to put its knowledge to good use in a thriving manufacturing industry – although the Danes seem to be able to do it; maybe Dutch innovation and industrial policy should take a radically different course. The Dutch could turn knowledge development into a specific national economic sector. Make money with knowledge, and sell it strategically to foreign customers. A good Idea? I think so. But there are two handicaps. Firstly, if one would really like to earn money on knowledge, then the development will have to go all the way to a demo, or at least to a well functioning pilot. Prove the technology. It would be an option, but it costs money (see above), which is not available. Secondly, for that to be a national strategy, the nation will have to devote itself entirely to knowledge development, meaning attracting more students in science and technology. And agriculture of course. Develop knowledge, not for one’s own use, but to market abroad the articles of this sophisticated knowledge shop. And the Netherlands could try to raise an interest in other European countries with a cheaper but skilled technological workforce for building those demos and pilots together. In that way, the biobased economy could still lead to a successful European knowledge export, a far echo of the ten year old Lisbon ideal.

Tags: Biobased economy, Innovation, Policy
By: Paul Reinshagen
on: 17 May 2013