You are here: Home / 2013 / May / BRIDGE: a unique link between innovative sectors

A happy man, Barend Verachtert called himself, head of the unit Biotechnology of DG Research & Innovation of the European Commission. Friday 17 May 2013, at 5 o’clock in the afternoon, the administrative negotiations on the innovation program BRIDGE had been successfully concluded. BRIDGE: Biobased & Renewable Industries for Development and Growth in Europe. Now on to the political decision making process, with a meeting between CEOs and Barroso on 10 July, and after that the procedures in the member states and European parliament. 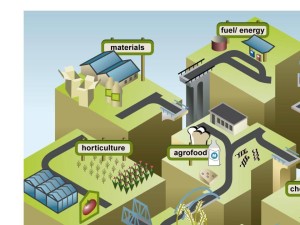 BRIDGE is no trifle. The European Union contributes € 1 billion to the research and innovation program, and European industries have committed themselves to another € 2.8 billion. A major public-private partnership intended for a takeoff of the European biobased economy. A real challenge, characterised by, in Verachtert’s words, ‘many parties involved, many interests at stake, much hassling’. BRIDGE fits perfectly in the new European Horizon 2020 strategy to link research to innovation, and to focus on social challenges.

Across sectors
Unlike many research programs, like the ICT or aircraft programs, the biobased program is entirely new. And there is no dominant sector and no dominant player (type Airbus) in the European biobased economy. On the contrary, sectors thus far unrelated are now going to cooperate; like the agro and chemical sectors, and moreover paper, waste management, energy, logistics and more. Politically risky, says Verachtert. And BRIDGE is very ambitious, according to Annita Westenbroek, programming coordinator of the European Biobased Industries Consortium, in the sense that BRIDGE aims to develop entire production chains, expressly reaching across existing borders of economic sectors. 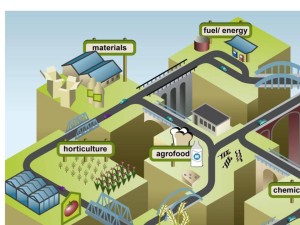 The situation with BRIDGE (detail)

BRIDGE spans a seven year period, with a continuous yearly programming. At first, programs are formulated around five value chains that among them span the entire field. Within each value chain, finally at least one ‘flagship project’ will be realised that will be optimised for industrial application. Clustering and networking will be important instruments for realisation of the work package. SMEs will be included in the process as much as feasible, because – as Roger Sheldon, himself the CEO of a small enterprise, put it – SMEs assist in putting new technologies into actual practice. BRIDGE programming is done entirely by the industrial partners.

Put Europe on the map again
Old values are shifting. Agnes van Ardenne, a partner in BRIDGE as a representative of the horticultural sector and the Dutch Biorefinery Cluster, foresaw that ‘there will come a time when the plant will carry a higher income to the farmer than the tomato’. And indeed, horticulturalists work hard to put side streams to good use. As for instance, the development of tomato trays made of (indeed) tomato plant fibres. And the isolation of special substances, used for their fragrance or medical properties, or in cosmetics. And Math Jennekens, speaking on behalf of the paper industry, formulated the ambition to use all ingredients of the feedstock, likewise as a medication, for crop protection, or as a feedstock for chemical industry. And he formulated the idea that the industry may eventually ‘lease’ the fibre to customers: they may use them a number of times in different products that are recycled; after which the fibre finally ceases to exist, as it is transferred to chemical industry as a feedstock. 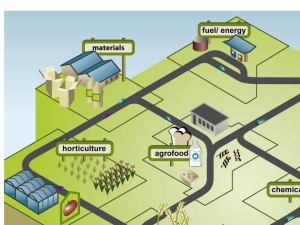 BRIDGE is not just some program. Many biobased processes in Europe near commercialisation, said Marcel Wubbolts, DSMs CTO and chairman of the European Biobased Industries Consortium. Many opportunities to end up in the valley of death. For commercialisation of second generation ethanol, DSM went to the US, where government offered better prospects. BRIDGE should return biobased initiatives to Europe. In order to realise Europe’s goals: 25% biofuels and 30% biobased chemicals in 2030. Which would lead to revitalising rural areas. Leading to 1 million extra jobs in 2030. Due to a major commitment of the European Commission and the biobased industry.