You are here: Home / 2012 / October / The carbon dioxide economy, the next revolution in chemistry

Carbon dioxide is not a waste material but a feedstock. That was the idea behind the German nova-Institut’s conference, one of the first CO2-conferences to be held in Europe. And surprisingly: the entire chemical network buzzes with enthusiasm. Just a few years ago, all chemical scientists would say: that does not have any use, that will require too much energy. On the contrary: in the future we can produce anything from it, in particular biofuels and biobased plastics. If only there is enough energy available, from artificial photosynthesis. Although some people would maintain that carbon dioxide has nothing to do with biobased.

CO2 is the only resource amply available in Europe, and for free moreover. ‘Chemical industry and photovoltaic industry cooperate in development of artificial photosynthesis which will use CO2 as a carbon source for a wide array of products and fuels.’ Says German nova-Institut at its conference on carbon dioxide’s prospects. There was much response from chemical researchers and technologists. At present, urea is almost the only product produced at a large scale from CO2, and some methanol and a teaspoon of aspirin. 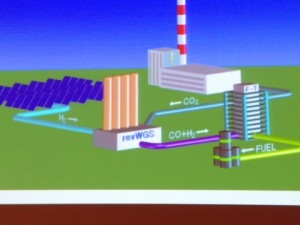 The solution for energy storage
In the near future, carbon dioxide and hydrogen will be the feedstock for biofuels and biobased plastics, based on cheap electricity from a highly improved artificial photosynthesis. This would carry a solution for the problem of energy storage of sustainable electricity from solar and wind power. We can use excess electricity for hydrogen production (through water electrolysis), which will react with carbon dioxide to produce methane and methanol. Right now, this would seem rather far-fetched (in this scheme the kWh would have to cost 0.03 cents to the maximum), but in Iceland such an installation is in operation which produces methanol from almost free geothermic energy and carbon dioxide, transported by pipeline.

But in order to prepare for this economic land of plenty with its opportunities of artificial photosynthesis and its corollaries, chemical scientists and technologists develop the production of e.g. biodegradable biobased plastics, methane, methanol and other biofuels. Prototypes, pilot installations and demonstration plants, the advent of a new business branch, are underway.

Five steps
In its congress notes, nova describes the opportunities and the possible development of the carbon dioxide economy. They distinguish five development steps, not to be developed subsequently but jointly. Nova calls this development ‘chemical industry’s next revolution’.

•    The first step includes production of gaseous fuels from excess electricity (power-to-gas) as described above. The CO2 source in pilot plants is flue gases as yet, but it can in a later stage be obtained from the atmosphere directly (step 5).
•    The second step includes chemical base products and polymers production from CO2. Such polymers may contain as much as half of their weight in CO2. They are in the market already, these CO2-biobased plastics, and can be used as biodegradable substitutes for traditional plastics like ABS (acryl-butadiene-styrene) or PS (polystyrene), if necessary mixed with e.g. PLA (polylactic acid) and PHA (polyhydroxyalkanoates).
•    The third step is about use of CO2 for industrial biotechnology, for instance for accelerated growth of algae and seaweed, which would subsequently be used for other products.
•    The fourth step is artificial photosynthesis. Which is closer at hand than we suppose. Panasonic showed a prototype in operation, producing lactic acid from CO2 using a nitride chip. Based on its high productivity (10 times that of natural photosynthesis), this technology promises to produce locally and sustainably chemical products and polymers, without the intermediate of costly and scarce catalysts.
•    Finally, the fifth step will facilitate the retrieval of CO2 from the atmosphere, anywhere in the world. Again, pilot plants are in operation, the technology is in swift development. 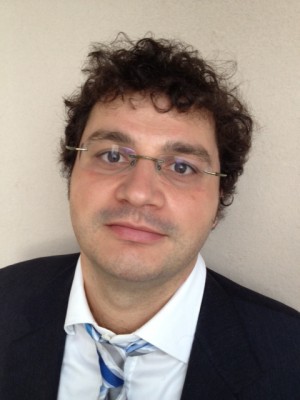 Around the corner
Nova-Institut is quick to wake up anyone who thinks that a CO2-economy which is far away. Director Michale Carus and researcher Fabrizio Sibilla estimate that the Chinese will have mastered the technology within five years. And on the subject of CO2-plastics: Siemens showed a vacuum cleaner casing produced from this material, last summer at the Achema.

And in order to take off the edge of the argument from the introduction: the CO2 economy is not only about biobased, but about a world which can fulfill its needs with technologies, now in full development. Among which: ‘biobased’ technologies which can process agricultural yields and all kinds of waste; artificial photosynthesis which can process an excess of sustainable electricity into useful products or be used for desalination of seawater; production of biodegradable biobased plastics; capturing carbon dioxide from the air; and food production. Albeit in ways, completely different from present practices.