You are here: Home / 2012 / October / Bioplastics from carbon dioxide, new and biodegradable 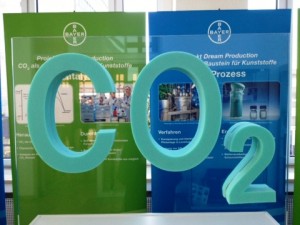 Carbon dioxide is the final product of the carbon cycle, either by biological processes or by incineration. It disappears into the atmosphere or is taken up in a new photosynthetic cycle. Its main economic uses are in oil recovery, beverages and fire extinguishers. And for quite some time, in urea production. And now also in new, biodegradable CO2 plastics.

The production amounts are minute as yet, and the catalysts for these reactions to produce the new polymers are still being developed. It is remarkable that the architects and developers of these new materials prefer to do the ‘right’ thing straight away; preferably they do not research cobalt or cadmium containing catalysts, but rather those containing iron or zinc. Or, as Peter Styring (Sheffield University) puts it: ‘catalysts are the most important cross-over technology, in use with 85% of all chemical processes.’

Better biodegradable
Most new polymers and their processes are in the research phase as yet, although Siemens showed a household appliance (a vacuum cleaner casing) at this summer’s Achema, made from polypropylene carbonate, one of these new CO2 plastics. One of the advantages of this category of polymers is that most of them are biodegradable  as a result of the oxygen atom in the chain. That makes for better ‘food’ to the bacteria.

The first CO2 plastics on the market are polypropylene and polyethylene carbonate, and CO2 urethanes. They were hotly debated at nova-Institut’s two-day CO2 conference in Essen, in the first half of October. The entire CO2 economy was discussed there, with the applications and the way of acquitting CO2 (see our article, 14 October 2012). CO2 is the only feedstock which is readily and cheaply available in Europe.

An absolute breakthrough
Polypropylene carbonate (PPC), containing 43% CO2 by weight, seems to be the first important polymer in this new series. Its production now includes polymerization of conventional propylene oxide, from naphtha, with CO2. Later (when artificial photosynthesis will have made a breakthrough), propylene oxide will be synthesized from CO2 itself, through methanol as an intermediate. By that time, the polymer will consist almost entirely of CO2, and will be 100% biobased. It is a highly thermo stable polymer, very elastic, transparent, biodegradable, non-toxic, containing a ‘memory’. It can be foamed and processed into films, and is easily mixed with other biopolymers like polylactic acid (PLA) and polyhydroxyalkanoates (PHA); in doing so, the plastic becomes less brittle, approaching an engineering plastic in its properties, but retaining its biodegradability. It can be processed on existing machines, like extruders and blow moulding machines. American Novomer company, in which DSM participates, owns important patents for the polymerization; other companies are active in this field as well. According to Bernard Rieger (UT München), PPC is an absolute breakthrough, and the ultimate answer to polypropylene.

Insulation foam, matrasses, packaging material
The process to produce polyethylene carbonate (PEC), another new CO2 plastic, includes polymerization of ethylene oxide with carbon dioxide. It is a polymer with an even higher CO2 content by weight than PPC. Novomer possesses the patents for the production of this bioplastic as well. It has a very low oxygen permeability, and is therefore very well suited for food packaging. In the USA, it is Food Contact Approved (AFC).

Polyurethanes, produced from polyols and CO2, are another new class of carbon dioxide polymers in development. They will initially be marketed as insulation foam and materials for mattress production. A Bayer pilot plant for the production of this material has come on stream; Bayer plans to start commercial production in 2015. A lignite factory supplies the required carbon dioxide. Technical University Aachen (RWTH) develops catalysts for this process. In short, many German research results at this conference in the German Ruhr area. As one would expect, but the rest of the world are in the game as well.

High hopes
Carbon dioxide chemistry – just like biobased polymer production – is not about copying fossil polymers, but about developing better polymers, which can be processed on plastics industry’s existing devices. Other polymers than those mentioned, like polyhydroxy butyric acid (PHB) or polycyclohexane carbonate (PCHC) are in the pilot phase. Chemicals like formic acid on the verge of a breakthrough.

Chemical researchers buzz with enthusiasm, and are eager to develop and market these new polymers. The breakthrough of the last new polymer in the market dates from 30 years ago, and there are high hopes that such a cash cow will be amongst these new polymers. Bernard Rieger, quoted before, thinks: ‘We perform better than nature itself.’ Although the amounts produced as yet are minute. The growth of new materials, both biobased and by the CO2 pathway, is by far not fast enough to cover demand of renewable materials. Let alone to make a dent in the greenhouse effect.