We already went into promises of biotechnology and of biological preparations (a.o. in no.54, If chemistry and biology join forces). Biology makes less progress than hoped for, and its successes remain restricted to a limited number of therapeutic applications. Its major successes are in the treatment of rheumatism, cancer, Crohn’s disease, psoriasis and asthma. Nevertheless, its potential is still large; and as we learn fast about all processes within the biological cell, it is not unreasonable to expect more to come. Developments in biology and medical science are going to reinforce each other. Like in food industry (for instance artificial meat based on muscle stem cells); in agrochemistry (for instance useful insects in greenhouses and alternatives to fertilizer and insecticides like biostimulants); and in the materials sector (for instance bacteria-based plastics like PHAs). 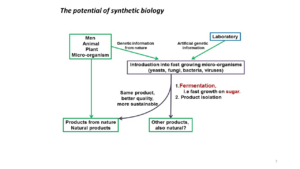 What are biological medicines?

Definitions become more complicated all the time. But often, the simplest are the best: in the production of biological medicines, a living organism is involved; a human, an animal, a plant, a mould or a microorganism. Aspirin made from fossil oil doesn’t comply to this definition, but if it were isolated from a willow branch, it would also be a biological medicine. Major examples from the past include insulin, a number of growth hormones and interferon. This definition also encompasses vegetal medicines and the better part of homeopathy. Vaccines and blood and its components also comply to this definition. Also: living tissue and cell culture, down to the use of stem cells in order to grow organs or parts thereof (called organoids) as an alternative to organ transplants. Much interest nowadays is devoted to preparations on the basis of gene therapy, and adaptations in DNA and related life-supporting molecules. The figure shows the very large number of options falling under this definition.

To the left in the figure we see the well-known natural products, like vanillin extracted from the orchid or Penicillin G from the Chrysogenum mould. But we can produce those products more efficiently and under better controlled conditions in a fast growing microorganism; like a yeast cell. Of course, we can also extract genetic information from multiple sources and introduce these into a microorganism as a workhorse. We can also introduce it in a plant, like we did in producing so-called golden rice. Yellow-coloured rice that produces vitamin A, based on genetic information taken from the daffodil, the rice plant and a bacterium. And finally, there are no technical limits to the use of artificially obtained genetic information; for instance a piece of DNA that doesn’t occur in nature; or the introduction of a non-natural letter to the DNA alphabet.

Products made in this way can be quite complicated. Often, biological medicines recently napproved for introduction on the market consist of complicated combinations of natural products like proteins, sugars and DNA building blocks. Down to cell parts and entire cells. The so-called monoclonal antibodies are modern variants, often intended to induce activity of our immune systems. 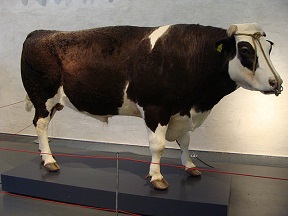 Limitations and opportunities of synthetic biology

Modern biological medicines have a huge potential. This is so large that initially, researchers made many mistakes and false promises. Like in application in higher organisms, for instance in Herman the Bull and Dolly the Sheep. An isolated and remaining example is the production of Ruconest in the milk of genetically modified rabbits by Pharming in the province of Northern Brabant (the Netherlands). Ruconest is a therapeutic protein, used in the treatment of hereditary angio-oedema, a dangerous swelling of soft tissues.

A major and excellent first step has been the use of microorganisms as a production factor. This goes hand in hand with the major acceleration in our understanding of the universe of microflora and –fauna, and the unparalleled potential in its genetic diversity. Estimates of the potential of that universe tell us that we know just a few percent of it, and use only a fraction of the latter. At present, rheumatism, asthma and cancer are the three therapeutic areas most targeted; but the potential for cardiology, immune therapy, dermatology and neurology is being examined already.

A disadvantage of modern biological preparations is their limited storability, and the requirement that they are administered through an injection. Because they often are quite similar to self-produced compounds, the intestinal tract breaks down the biological medicines almost completely. Price also slows down application. Treatments often cost €10,000 and even up to € 100,000 annually. Moreover, these medicines are intended for treatment of chronic conditions, and therefore costs per year gained add up all the time.

But such high costs ignite worries and discussion. Development costs are high, but not extremely more so than those of ‘classic’ medicines. Production processes are complicated and vulnerable (for instance for infections by ambient microorganisms) and require many restrictions and controls. Yet, prices do not reflect costs; rather the social value of an extra year of life. And hence, the market for biological products manoeuvred itself into an ethically troublesome corner. Nowadays, the use of genetically modified organisms in healthcare isn’t an issue anymore, and neither is a patent on ‘life’; but then, present earning models of pharmaceutical industry are. 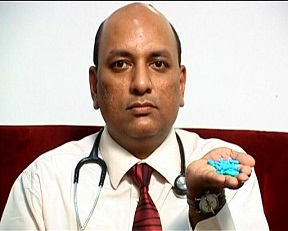 India hosts most production facilities for vaccines. Would this imply that India will also produce the generic varieties of the pricey biological preparations? At a much more modest price? We wouldn’t be surprised. Humira’s price, the most successful biological medicine, fell by 80% when the patent expired. The Indian company Cadila succeeded as the first to take a generic version to the market.

But the hurdles on the way to that goal are many and high; and ‘big pharma’ will not hesitate to continue that state of affairs. For instance, in the case of ‘biosimilars’, as generic biological preparations are called, the company introducing the product will not just have to demonstrate that the product is identical to the original medicine. That is because the composition is much more complicated than that of classic medicines and their generic variations. In spite of all controls, a generic medicine may still contain an unknown or otherwise dangerous component. Therefore, in this case an additional condition is set: clinical research too will have to show that the non-patented medicine will have the same activity and side-effects.

Cheap or good? Or both?

The American FDA finds itself between the devil and the deep blue sea again, just like in the case of the introduction of classic generic medicines from India and China. The American administration and the insurance companies would prefer costs of healthcare to be a low as possible; but the very same government also requires (with the help of industry) the best medicines; with a proper guarantee for good activity and safety. Generic classic medicines saved some $300 billion in expenses to the American healthcare system in 2019. Biosimilars might represent a cost reduction of $100 billion annually, in the coming years. India might lend a hand in reaching this policy goal, based on the major vaccine production and the cheap version of Humira.