One quarter of the recently developed new medicines are biomedicines. It still isn’t clear where this may lead us in terms of new antibiotics. But our insight into nature’s fundamental processes grows by leaps and bounds. Again and again, this supplies us with new tools for research and development. Our immune system reveals more of its secrets all the time; and our innate antibiotics offer new opportunities. Although even then, we proceed by trial and error. 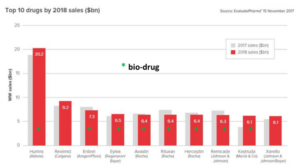 Biomedicines, do we need them?

For over 20 years now, biotechnology and gene therapy hold the promise to be decisive for the future of pharmaceutical industry. In the automotive industry, developments are fast and radical – witness the advent of the electromotor. The ‘substitution’ of biology for chemistry in medicines production progresses much more slowly. And yet in this 20 year period, biomedicines slowly enlarge their share in new medicines. Between 2000 and 2013, a breakthrough was far off yet. FDA approved some 25 medicines yearly, of which 2 to 6 biomedicines.

From 2014 onwards we see change coming, among others because industry complained about slow approval and strict rules. And bioproducts appear to be the winners: growing from less than 10% of approved products to over 25%. Even more convincing are figures on global sales. 8 out of 10 best-selling medicines are biomedicines; outstanding among them the anti-rheumatic medicine Humira. Anti-cancer preparations like Avastin grow in importance. And let’s not forget insulin, one of biotechnology’s very first success stories. It is somewhat misleading that we now discuss sales figures of patented products, well-known for their high market prices. Humira’s price for instance fell by 80% as the patent ran out recently. In short, we will have to wait and see if the breakthrough really takes place as competition starts at the generic level.

But there aren’t any bio antibiotics

Nature is our preferred supplier of wonderful antibacterial agents, like the streptomycins and the beta-lactams; and yet, the boom of biomedicines doesn’t yield us any antibiotics. Is research insufficiently oriented towards this goal? Or are there other causes? Anticancer medicines are in the lead: over thirty of 100 FDA admissions in 2020 and 2021 are anticancer medicines. Some ten of these are biological products. 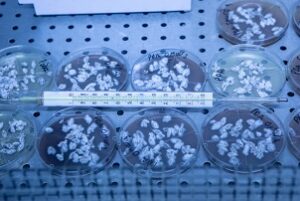 Despite many changes in the biochemical laboratory, the petri dish is still there.

We mentioned several times already the existence of antibacterial substances in and on our bodies. All living creatures contain such substances, in order to protect themselves from pathogenic organisms. An important class of such substances is called AMPs: antimicrobial peptides. Peptides are chains of amino acids. If the chains are very long, we often call them proteins. But the AMPs are relatively short chains, typically consisting of 15-50 amino acids. They are part of our innate defence system. The concentration of AMPs on babies is up to 10 times higher than that on adults; they play a role in the build-up of our immune systems.

AMPs are often found in our white blood cells. But their highest concentration is in locations that are in direct contact with the outside world. And they are prominently present in the microflora of our intestinal tracts. They don’t just protect us from bacteria – also from viruses, moulds and parasites. And they figure in research on, and cure of cancers. Well-known substances are lysozyme and lactroferrine.

AMPs have been researched from the eighties onwards, and we now know some 800 of them. Their mode of action is not unlike the antibiotics we dealt with before: they punch holes in the bacterial membranes, among which the cell wall. Although recent research shows that their mode of operation is much more complicated and versatile. We now tend to believe that AMPs have an open chain structure in a non-active situation. But if they come into action, they adapt their spatial structure to the situation at hand (folding, conformation). A characteristic that they share with other biological entities.

We now tend to conclude that it is difficult for bacteria to develop resistance towards AMPs; probably as the result of evolution. They have difficulties in changing the target locations of these substances by mutations. The large array of AMPs tends to create problems for them. But then, this approach is still in its infancy. And researchers are worried. If resistance against AMPs should pop up somewhere, it might affect the large number of their other functions.

AMPs are complex natural products; it is quite hard to produce them in sufficient quantities. In our blood, AMPs are removed as fast as possible by the blood cells. They don’t survive the intestinal tract. Therefore, the first applications are in skin diseases. And in keeping free from bacteria the surfaces of medical instruments, like catheters. Application by injection is being restricted to serious infections by multi resistant bacteria. Vancomycin is the best known product. Outside the realm of medicine, nisine is the AMP with the largest number of applications, as a food preservative.

As it is difficult to produce and handle AMPs, biotechnologists and nanotechnologists have started to produce analogues that are more stable (SNAPPs). Among them are star-shaped polypeptides that can literally tear apart bacteria, because of their pointed and electrically charged structure. Researchers expect that bacteria will have a hard time developing some form of resistance towards them.

By the end of 2020, Nature publishes an article, announced by the editors as follows: ’New antibiotics do not fear resistance’. But a few weeks later, the article is being retracted. Why then? Some data and figures are supposed to be wrong. It is unclear whether the concept itself, and the results are wrong as well.

The concept of the authors is to block an enzyme in the bacterial cell, that figures in the production of substances resembling cholesterol. Compare this to the blockade in the production of folic acid in the modus operandi of the sulfas. For these processes, bacteria use other pathways than higher organisms like humans and animals. The researchers of the article in Nature have produced the enzyme in its pure form. On their computer screens, they can test all existing antibiotics and related molecules on the property of blocking the relevant process of the enzyme. This allows them to find a number of promising products, of which some appear to be surprisingly simple. Comparable to the sulfas. According to the article, these substances will kill bacteria in actual practice. And there is a bonus. Because the substance blocks the operation of the enzyme, the concentration of the product to be processed rises; and that product triggers our immune system to arm itself against an attack by the bacterium in question. In sum, if the bacterium should train itself to circumvent the blockade, it will still being caught by our immune system.

In this area, artificial intelligence (machine learning) is becoming much more important. According to a recent publication in the authoritative Journal of the American Chemical Society, this will enable us to recognize antibiotic properties in substances. Not just if we research large compilations of substances that resemble antibiotics (this is a well-researched subject), but also if we research molecular structures at random. Potentially, we could find entirely new anti-inflammatory substances in this way. 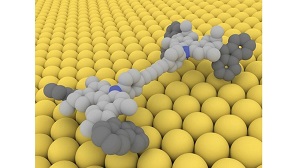 An appealing concept, published in Nature as well, comes from Nobel Prize winner Ben Feringa and his team. They already mastered the art of moving around their well-known nano car under the influence of light; now they also prove to be able to switch on and off antibiotics in the body, at will. They supplied one of the well-known quinolones with a side chain susceptible to light. The light causes the side chain to obtain a specific spatial structure; the activity of the antibiotic depends on that spatial structure. This allows the researchers to switch ‘on’ the antibiotic in infected locations, and ‘off’ where its action is not required or even undesired. For instance, the antibiotic will preferably be switched off in the urine or in other excrements. This will block to a large extent the development of resistance. For then we will be able to restrict the confrontation of an active antibiotic with the bacterium to locations where this is required. But as we know by now, the pathway from concept to active medicine may be very long.