After some time during a 100 year war, it may become unclear why and how it all started. Even the possible outcome may disappear out of sight. In the battle between chemistry and bacteria, chemistry seems to be losing. A growing number of biological preparations is being admitted as new medicines. But antibiotics are not among them. Moreover: appearances are deceptive. In the global search for better medicines and new antibiotics, the role of chemistry is more important than ever.

Project ‘100 years of antibiotics’
Episode 51. The story of lefamulin, how not to proceed
Episode 52. Prospect of new tools??
Episode 53. If chemistry loses
Episode 54. If chemistry and biotech join forces
Episode 55. Antibiotics and the intestinal flora 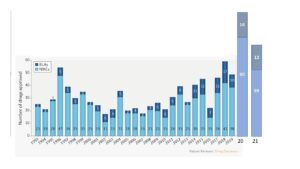 Chemistry and medicines have been intertwined for ages now. We disregard the role of the alchemy and take the 19th century as our starting point. Up to then, plants were the most important suppliers of medicines. But in the 19th century, chemical science succeeds in obtaining a number of important active components in a pure form, ready for inspection on their quality. Such as well-known substances like quinine and morphine. Aspirin belongs to this category as well, but here chemical science makes an extra step by the application of slight changes to the molecule, for a better medicinal action.

Then, a number of fully synthetic products appear; like ether and chloroform as narcotic agents, phenol as a disinfectant and the barbiturates as calming agents. In this colonial era, we can witness much chemical activity around 1900 on tropical diseases. This yields well-known synthetic antimalarial medicines like pamaquine (1926), mepacrine (1932) and later chloroquine (1943) and paludrine (1946) as alternatives to quinine. Salvarsan marks the overture to the pinnacle of the contribution of synthetic chemistry to healthcare: the sulfas coming from the German dye industry. 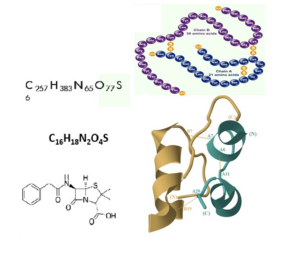 The languages of chemistry and biology are quite different. Left: penicillin; gross formula and structural formula. Right: insulin; gross formula, order of amino acids in two chains and spatial arrangement.
In particular the number of spatial folding opportunities are enormous, the reason why biology is more complex than chemistry. Each folding can represent different properties.
Click to enlarge.

But then, in the realm of antibiotics, synthetic (industrial) chemistry is being demoted to a somewhat more modest position. Complex natural products like penicillin and streptomycin appear to be very successful medicines. Chemical science produces many variations; these allow such products to stay in use for decades. And yet, synthetic organic chemistry continues to play a prominent role. Like in the development of quinolones and oxazolidines, and a number of isolated products. Outside the field of antibiotics, synthetic organic chemistry continues to play a major role; leading to the production of many anticancer drugs, antidepressants, antihypertensive agents, gastric acid inhibitors and many other medicines. For instance in the field of steroids, we see parallels with the antibiotics. Here as well, natural products lay the foundation, on which chemists apply many chemical modifications. Such medicines are being used in birth control, and as antimalarial and fever controlling agents.

In retrospect, we can hardly grasp the thalidomide (Softenon) tragedy. How on earth could that have happened, in the sixties of the past century? The basic knowledge of the relationship between physiological activity and molecular asymmetry had been present then for at least over 100 years. Witness the Nobel Prize for Van ‘t Hoff in 1901. And witness the major interest, in the past century, in sugars and their flurry of stereoisomers; each with their particular taste, nutritional value and physiological activity. And yet, until the end of the past century medicines are being sold that consist of 50/50 mixtures of laevorotatory and dextrorotatory molecules. For decades, moreover, authorities have required 95++% purity for pharmaceutical products. Yes, we know it may be difficult to separate laevo and dextro. Something done effortlessly by nature, by the way.

The arguments used to continue working with the mixtures are stunning. The body will make the choice for the medicinal activity of the laevorotary or dextrorotatory form all by itself; it will break down and remove the form not required. In the case of thalidomide, the results were devastating. The isomer not required is teratogenic for the embryo. Whereas the other one performs perfectly in preventing nausea in pregnant women. Another astonishing argument runs on the opportunity to obtain a patent. For many years, chemical scientists cannot obtain a patent in the US on the laevorotatory or dextrorotatory form of a product if it has been described already as a 50/50 mixture. Then by the way, the process to separate laevo and dextro can be patented. But of course, such a patent on a process is much weaker than a patent on a substance. But thanks to the eminent work of professor Ariëns in Nijmegen and others, these roles are reversed now. A mixture of laevo and dextro molecules can now be marketed if the safe and useful activity of both forms has been proven. And all countries now grant patents on these so-called optically active (or chiral) pure products.

Chemistry as the key player

We will show in some more detail in the following episode that the number of biological preparations in the inventory of medicines is quite on the rise. In the years 2014-2021, 25% (96 of 396) of new medicines approved by the FDA are biological preparations. In the 20 years preceding this period, this number is a mere 17% (84 of 490). But there is no clear dividing line between chemical and biological preparations. The main difference is that chemical terms, structural formulae and atomic design, cannot fully characterize biological products. The chemical structure of the latter is much more complicated; and the spatial form is more important than in the well-known structural formulae used in chemistry. But new insights may draw the two closer to each other again.

Of greater importance is the role that chemistry acquired in all aspects of development, production and application of medicines. Starting with the discovery of life’s processes at the atomic level; and of the start and subsequent development of diseases. Another term for this branch of science is molecular biology; that again shows how chemistry and biology become more and more intertwined. Now often called Life Sciences. At least as important are all chemicals that allow us to make diagnoses by having a look within the cell or within the body (by contrast liquids or biomarkers). Our colleagues, the physical scientists, like the instrument makers, electronic engineers and IT experts, are at least as instrumental in this development as the chemists.

The major contribution of chemical science lies in the actual development of the medicine. We need chemical science for a precise characterization of the target within the body. Then, chemical science will come up with large series of molecules that will be able to attack that target more or less effectively. Sometimes, chemists even succeed in obtaining the target as a crystal, which allows us to show it in great detail on the computer screen – for instance an enzyme for an important process within the bacterium. Then, we can investigate on the screen which chemical structures might do the job best – in other words, prevent the enzyme’s activity most effectively. Then, we can test the most promising structures in actual practice. If the substance really carries big promises, the next phase of chemical science follows: producing the medicine in the factory, in a process that is both safe and socially responsible. Moreover, chemical science plays a prominent role in the development of the best way of administering the medicine (in a tablet, injection or ointment). And of the most efficient pathway of the medicine towards its target in the body.

In the next two episodes we will explore what chemical science still has on its sleeve; and what we can expect from the area of biotechnology.