In these golden years 1960-1980, semisynthetic antibiotics are produced with very advanced chemistry and technology, in the eyes of contemporaries. But from today’s point of view, many primitive aspects are still present. In particular in comparison with the elder brother, petro chemistry. Often, equipment is rather standard and not tailored to the process. And often, we can still recognize the design of lab equipment. Production units are of modest size, one thousandth of those in petro chemistry. Processes are performed in batches. Like in the production of ampicillin. Continuous processes like in petro chemistry are utopic. 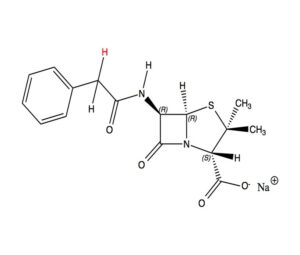 As we now know, the mould Penicillium Chrysogenum produces the natural product Penicillin G. From the ‘40s onwards, its production has been improved a lot. Around 1970, industrial boilers, stirred and intensely aerated, have grown to 10 m3. Later, they grew on to as much as 100 m3. The mould performs this extraordinary task to produce the complicated Penicillin G from no more than sugar, minerals, air and water. At first glance, the pathway from Pen G to Ampi would seem to be a piece of cake: we would just need to substitute a  single  hydrogen atom (the red H)  for an amino (NH2) group . In reality, the pathway is quite different – an example of the constraints of synthetic chemistry. Although nature doesn’t follow this ‘easy’ course either. It would be able to construct the Ampi molecule in its own way, given an evolutionary necessity for it. In the factory we need to remove the side chain, in the coloured area, from Pen G in order to arrive at the aforementioned 6-APA. That is subtle chemistry, certainly in the early years, as chemists need to leave intact the vulnerable penicillin nucleus. 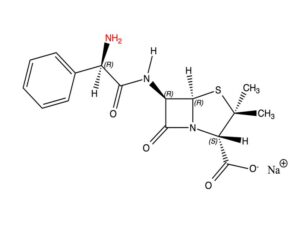 We need to construct the new side chain step by step and finally reunite it with the 6-APA. The construction starts from toluene, a well-known product in petro chemistry and almost present as such in crude oil. Toluene can be processed to hundreds of valuable compounds, among which caprolactam and nylon. In this process, benzaldehyde is formed as a by-product; it has a characteristic smell of macaroons and is much used in perfumes and flavourings. Fine chemistry often makes use of side products of petro chemistry as a resource. Such substances are cheap, and often in ample supply for small-scale chemical production processes.

Ask specialists how many steps it will take to produce Ampicillin from oil and sugar, and they will answer 10, 20 or even as many as 30 steps. Organic chemists count the number of chemical bonds that need to be broken and fixed. Chemical technologists count the number of chemical reactions plus the number of separations and purifications (distillations, extractions, crystallizations etc.). Anyway, it will take a lot of steps. In the first step we process benzaldehyde with prussic acid and ammonia to phenyl glycine. In doing so, we have constructed all atoms in the correct order for the new side chain of 6-APA. 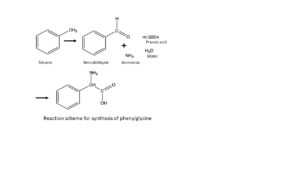 But now, we run into another shortcoming of the then prevailing chemical science. Phenyl glycine is an asymmetric molecule; it exists in two forms: laevorotatory and dextrorotatory, that are each other’s mirror image. Nature doesn’t have any problem in producing asymmetric products, as all reactions in living nature proceed in an asymmetric environment consisting of proteins, enzymes and related biomolecules. But in petro chemistry and its cracking processes, all molecules have been flattened out, so to speak. If our synthesis then produces a molecule that exists in a laevo- and a dextrorotatory form, both will be produced to exactly 50%. And in the production of Ampicillin, we definitively only need the laevorotatory form of phenyl glycine.

Separation of laevo and dextro has been a Dutch (industrial) specialism for many years, dating back to the discovery of mirror molecules by the Dutch Nobel Prize winner Van ‘t Hoff (1901) from Leiden. Essentially, separation of the mirror molecules consists of a reaction with an asymmetric natural product. This will yield two products, and now these are not each other’s mirror images anymore and therefore have different properties. For instance, they can be separated by crystallization.

In the case of phenyl glycine, researchers treat this substance with a derivative of camphor (camphor sulfonic acid). The reaction product with dextrorotatory phenyl glycine is soluble in water; but the product with the laevorotatory molecule isn’t very soluble and can therefore easily be separated by crystallization. We can then recover the laevorotatory phenyl glycine and prepare it for its junction to 6-APA. That again is a process with a number of steps, that needs subtle handling in order not to damage the vulnerable penicillin nucleus.

The Netherlands are one of the first and major producers of Ampicillin on an industrial scale. The change in production processes and factory locations is a fine example of industrial development. Around 1970, the situation is as follows:
– Sugar from the sugar factories in the provinces of Northern Brabant and Groningen
– Production of mould cultures and fermentation to Penicillin G in the factory of Gist-Brocades in Delft
– Processing to 6-APA in a separate factory of Gist-Brocades in Delft
– Toluene from the oil refineries in the Rijnmond area near Rotterdam
– Processing toluene to phenol, with benzaldehyde as a side product, at Synres in Hook of Holland
– Production of prussic acid and ammonia at DSM in Geleen
– Combination of prussic acid, ammonia and benzaldehyde to form phenyl glycine in a special unit at DSM in Geleen
– Separation of the mirror images of phenyl glycine at (Océ) Andeno in Venlo
– Preparation of laevo phenyl glycine for coupling (with 6-APA) at Andeno in Venlo
– Coupling of 6-APA and phenyl glycine to Ampicillin at Gist-Brocades in Delft.

So far for chemical science and industry. In order to deliver the product to the patient, pharmacy will still have to ‘formulate’ the substance (process to a tablet or other method of administration). Then, Ampicillin will be packaged and distributed to wholesale distributors and the pharmacy.

In the 25 years following 1970, all factories mentioned (except those of toluene and sugar) are being merged into DSM. This allows this company to better align these processes, or to integrate or replace them. Major changes take place in the ‘90s and at the turn of the century. Then, many chemical processes are being substituted by enzymatic processes; derived from the latest insight into reactions in living nature. Following the (scientific) trend to value ‘natural’ over ‘synthetic’ again. We will expand on that in a separate episode. 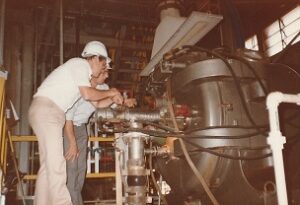 Production of a phenyl glycine derivative at Sanofi do Brasil in Cosmopolis, Brazil (picture taken by the author)

The success of the semisynthetic penicillins, first and foremost Ampicillin, grows wings. Between 1970 and 2000, global production volume increases from several hundred to several thousand tons per year. DSM and the Netherlands remain market leaders during that period, with market shares up to 50%; in particular in the intermediate products like Pen G, 6-APA and phenyl glycine. The number of Ampi producers grows exponentially. In the ‘70s, all producers are still located in the Western world and Japan. Then South America, where each country aims to have an Ampi factory of its own (much cheaper than importing formulated and packed end products). In the ‘80s, development takes off in Asia; then, billions of people can be supplied with life-saving medicines produced from factories of their own. There are small production units in Poland and Hungary. But in the Soviet Union, production never takes off; the country is being supplied with formulated end products, primarily through Finland. In Africa, production starts notably in Egypt and Algeria. Sub-Sahara Africa is being supplied increasingly from India with formulated end products.

There is a much held opinion that production of antibiotics in Asia started as it was transferred from the Western world because of low wages. But this is a persistent misunderstanding, bordering on a Western feeling of superiority. For the Asians, it was much more important to be able to supply their own markets with essential and affordable medicines. This resulted in the creation of dozens of local producers, who waged an intense competition among each other. Later, this competition resulted in exports to the Western world. And with some success, as we know by now.