It seems as if medical science grows wings, judging by the pace of subsequent successes. Pharmacologists increasingly know how chemical structure determines the action of the medicine. There are signs of resistance to wonder drugs like natural penicillins and cephalosporins; but this is competently counteracted by the introduction of many semisynthetic (i.e. partly modified) alternatives. Increasingly, we know how to lend nature a helping hand. 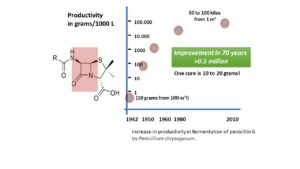 Problems are there to be solved

In the ’60s euphoria, we see the ascent of resistance in the use of antibiotics as a challenge rather than as a threat. It is just 25 years after the time we didn’t even know penicillin’s structure. But now, we know precisely which part of the molecule we need to keep intact, and where to manipulate it – in order to improve its action or to send the resistant bacterium astray. Resulting in the widely known semisynthetic penicillins Ampicillin and Amoxicillin.

Synthetic is better than natural

Later, much more chemistry comes peeping in; then the relationship with natural products is hard to find. It is the era when ‘synthetic’ is supposed to be better than ‘natural’. The era of the invention of plastics. The era when many researchers try to find a synthetic alternative to biosynthesis (the natural process) in the production of penicillins and cephalosporins. There is a generally held belief that in the end, this will lead to a much cheaper process. There is a multitude of research proposals and requests for subsidies; often with a high score for inventiveness and social relevance.

But although researchers find a lot of variants on the well-known theme, they do not succeed in beating the natural synthesis of the nucleus of these antibiotics. They do succeed however in improving the productivity of moulds that produce antibiotics. Check the graph: since Fleming’s and Florey’s experiments, productivity of the mould producing natural Pen G rose by almost a million. But by the end of the 20th century, biotechnology gains the upper hand. That reduces chemistry’s importance; and particularly, the conviction that synthetic would be better than natural.

A flurry of successes for semisynthetic antibiotics

Semisynthetic antibiotics are very successful. Albeit not to the extent of penicillin’s success just after its discovery. But the new medicines do lend credibility to belief in progress. There are improvements in method of administration (mainly in form of a tablet); in the number of toxic bacteria that can be controlled (both gram positive and gram negative bacteria; hence the name broad spectrum antibiotics); in shelf life of the products, in side effects, and often in the concentration in the blood or in beneficial interactions with other agents.

Together with other medicines (cortisone, prednisone, the pill), antibiotics lie at the basis of the belief in progress, predominant in the ‘60s to ‘80s of the past century. Life-threatening infections become a rarity. We start to believe that we can cure cancer. Hormone therapy delivers us many wonderful results: from rheumatic to fertility treatments, growth regulation and treatment of psychiatric conditions. There is a revolution going on in medical equipment. Observation technology develops at an unbelievable pace (and with it, diagnostics). All in all, this suggests the development of an omnipotent health industry  (whereas nowadays, we tend to stress the flip side of this development). 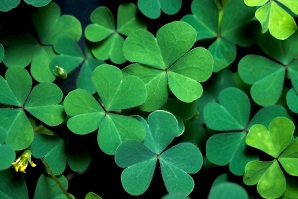 Late 19th century, doctors complain about the limited number of medicines at their disposal. They don’t say it aloud, but they know they all too often have to turn patients away. Early 20th century, GPs have at their disposal at most 25 proven medicines, like aspirin, digoxin, insulin, salversan, bromides, morphine and barbiturates. The medicine chest starts to grow appreciably when the sulfas enter the scene. And if we consult the 1960 handbook of medicines, we see more than 2,000 medicines at the doctors’ disposal. The future seems bright.

But the large number of inventions and discoveries have a common, unsettling background. In spite of their miraculous stories, these discoveries are in fact all based on chance rather than on rational design. That holds true for sulfas and penicillins, and for the steroids (cortisone and anti-rheumatic medicines). And we can even understand that state of affairs. Our knowledge of the interaction of the medicine with the body is very sketchy. It isn’t until late in the 20th century that we discover how the biological cell operates, chemically speaking; and only then can we start to learn how medicines interact with those processes.

Fortunately, by that time chemical science has developed further. If researchers find an active product, chemical science can produce an almost limitless number of derivatives thereof. That has supplied us with better versions of existing products, and at times with surprising new ones. If we can connect chemical structure and mode of action, chemical scientists can often design and produce better varieties.

A first example is the prevention of the build-in of amino benzoic acid by the sulfas in the biosynthesis of folic acid. This knowledge doesn’t lead us to insight into better medicines right away; but it does lend researchers a motive to construct a large number of related molecules, hoping for a candidate with better curative action. And they find such candidates; not by rational insight, but by a very large number of attempts. Often, chemical researchers find medicines they were not even looking for. The discovery of the sulfas has set in motion a ‘chance generator’ that has delivered us diuretics, antihypertensive agents, medicines for curing glaucoma or an overactive thyroid gland, medicines for lepra and agents against diabetes and malaria.

There is less room for direct hits

Again, by now we know much more about the action of medicines in our bodies. And chemical researchers can now synthesize major amounts of related molecules (so-called libraries). Nevertheless, the search process is still governed by chance. There is no rational process there. That means to say: we are still unable to design a medicine on the basis of knowledge of what goes wrong in our bodies. We always need a guiding molecule (a lead).

We do increasingly assemble information on the relationship between chemical structure and medicinal action. Therefore, we can direct our chance generator with increasing precision to molecules that are likely to show the clinical action desired. And yet, even then the development of a safe and efficient medicine often is still years away. Moreover, the golden age of medicinal chemistry has yielded us so many good medicines, that there is less and less room for direct hits. The golden age fades away.