In 2019, the American FDA approved just one antibiotic: lefamulin, a medicine against pneumonia. It is marketed under the name of Xenleta. The history of this medicine makes a telling story. It clearly shows the obstacles in the search for, and the development of new medicines. And then, commercializing it – another difficult process. The parallels with the world’s most successful antibiotics, the penicillins, are striking. And chemical processing is impressively complicated.

Project ‘100 years of antibiotics’
Episode 49. Further along trodden paths?
Episode 50. Resistance, a second look
Episode 51. The story of lefamulin, how not to proceed
Episode 52. Prospect of new tools??
Episode 53. If chemistry loses 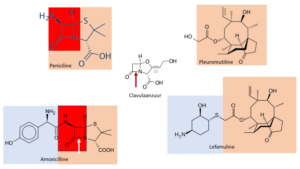 Molecular formulae for the well-known penicillins and the pleuromutilins. In pink the so-called nucleus. In blue the side chains, that can be manipulated at will. In red the part of the penicillin molecule that resistant bacteria attack to disarm the antibiotic. Click to enlarge.

Big pharma throws the towel into the ring

Our story starts in 1950, when pleuromutilin is discovered, a substance with bactericide properties extracted from mushrooms. This is our first parallel with penicillin already, also discovered as a bactericide and present in a mould. The origin of the name pleuromutilin isn’t clear; maybe its meaning is that the substance mutilates (disturbs) pleurisy (inflammation of the membranes that surround the lungs). Pleuromutilin belongs to the chemical family of the terpenes, more akin to oil than to antibiotics. The Swiss firm of Sandoz, one of the old representatives of the big pharma family, markets two derivatives: tiamuline (1979) and valnemuline (1999). Both as a veterinary antibiotic. The British firm GlaxoSmithKline, GSK, also of the big pharma family, develops a variety that can be administered to humans: retapamuline. But unfortunately only in the form of an ointment. The major success of the penicillins and the closely related cephalosporins stands in the way of further development.

As concern over resistance grows, interest in the substance returns around the turn of the century. But its development is way too slow to the taste of big pharma. In Sandoz, a team has been developing for quite some time the compound lefamulin (another representative of the pleuromutilin family). In 2006 they are allowed to spin out. Their company is named Nabriva. (In the meantime, the name of Sandoz changed to Novartis as they merged with Ciba Geigy – one of the two Swiss big pharma companies, the other one is Hoffmann la Roche). The spin-out of this team is exemplary of the industrial strategy in that era. Big labs become expensive and bureaucratic, and their success rate is falling. Spin-outs into smaller and dedicated companies might be a better strategy. And if they are successful, big brother can still come to the rescue; or even buy back the company. Mutilin activities are spinned out in 2006; in that very same year, Nabriva succeeds in synthesizing the molecule of lefamulin, and registering it. A surprisingly quick success. 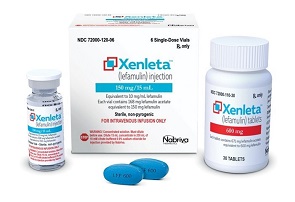 Xenleta, the most innovative addition to the arsenal of antibiotics. Therapeutic use is not recommended unless required by resistance to other antibiotics. Source: Nabriva Therapeutics.

After 2006, it takes the researchers 13 years to prove the safety of lefamulin, and that it can be administered orally. Moreover, they need to develop an efficient and reliable production process, painstaking work. Here we find the second and third parallel with the penicillins. In both product groups, the bactericidal property is situated in one part of the molecule; coloured pink in the formulae. If we change this so-called nucleus, its action vanishes. Therefore bacteria target this very nucleus with their weapons, enzymes, and develop resistance. In penicillin, this is the part coloured red. For lefamulin, we haven’t come across any resistance yet. The number of applications is very small at present, but expectations are high. The mode of action is entirely different from that of all other antibiotics. Lefamulin targets the ribosome (part of the DNA) and blocks the production of essential bacterial proteins.

With pleuromutilins as with penicillins, we obtain the nucleus by growing the naturally occurring mould in a suitable medium; and by stimulating this workhorse to produce as much as possible. In the case of penicillins, these fermentation processes have been infinitely optimized. For the mutilins we still need to improve a lot. So far, chemical synthesis is out of the question. True, in the literature we find a number of ingenious syntheses of the nuclei. But all of them are a far cry from commercial relevance. The nuclei as such aren’t good medicines. They need to be fitted with all kinds of side chains, coloured blue in the formulae. The number of variants is endless. We need the side chains among others for a good formulation of the medicine, in order to obtain a good concentration in the blood, or to prevent breakdown of the medicine in stomach, liver or intestinal tract, or improve storability. And for a variety of secondary functions.

It is striking in the development of lefamulin, that from the start in 2006 all steps including the application for admission with the FDA, have been executed by small and medium-sized companies. Big pharma isn’t involved; although some small companies might still be owned by larger ones. The production at some scale of the side chain (check the formula) is quite complicated. Sandoz still has many patents and is reluctant to share them. Nabriva looks for help to a number of small contract research companies, in order to master the complex stereochemistry. (For the chemically trained reader: there are three chiral centres, i.e. 8 possible stereoisomers; separation is done through chiral column chromatography, and in the end by selective crystallization). Along these lines, they obtain enough material for the first small-scale clinical tests.

They hire former employees of big companies for the organization of large-scale clinical tests (phase 3). They have to bring their stocks to the market in order to attract new capital. Then, larger amounts of product, in terms of kilos, come with many new problems. Until then, they still obtain the nucleus, the pleuromutilin, from Sandoz. But the American company Eli Lilly, once more a representative of big pharma, acquires those activities; and they tell Nabriva that they will have to source the product somewhere else.

Lefamulin on an industrial scale

Finally, they succeed in this with SEL Biochem Xinjiang in China. At present this company is the major producer of pleuromutilin globally, all of it processed to the veterinary product tiamuline. At the speed of lightning, they raise product quality and control systems to the high standard of humane medicines. Through India, Nabriva arrives at the Irish Arran company for the production of major quantities of the side chain. Arran is a daughter company of Almac, also an Irish company; in the past they already produced smaller quantities of this product, of pharmaceutical quality, for Nabriva. 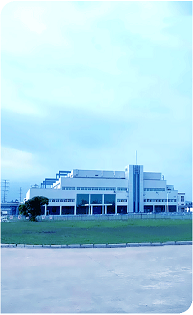 As they now have nucleus and side chain in hands in sufficient quantities, they need to solve the problem of joining the two. Once more a parallel with penicillins: there, joining nucleus and side chain has taken up the work of hundreds of chemists for many years. The Portugese company Hovione, well-known because they produce many generic medicines, solves this problem in its Irish factory. One upon a time acquired from Pfizer, one of the big pharma family as well. Time and money are running out, so Hovione has to leave out steps in the trajectory from lab scale to factory scale. For production of the tablet, they consult Almac again. Often, making tablets for antibiotics is difficult because the dose is substantial. Then 600 mg has to fit into a tablet; and this still needs to remain handy-sized. Finally, they develop a sterile injectable formula of lefamulin. For its production, they need to perform another tour de force, now with partners from Italy and Norway. Two weeks after the approval as a medicine by the FDA, they have enough tablets and injections at hand for their patients.

All the trouble for nothing?

As they have come such a long way, we suppose they deserve the success? Alas, there is more trouble ahead. In the first quarter of 2020, sales amount to a meagre €140,000. The Nasdaq quotation in New York is in danger now: in three years’ time, the quoted price falls from $12.50 to less than one dollar. There is a major paradox in the way doctors treat new antibiotics: if they have the choice, they rather don’t use them; then they will still have something up their sleeves in case of emergency. Because of the specific mode of action of lefamulin, they judge this to be an ideal candidate for emergency use. All the more so because they can administer the medicine both as a tablet and in an injection. Bankruptcy looms around the corner – as happened already with many small companies in the business of antibiotics development. Nabriva sacks the majority of its sales team, as well as over one third of its staff of 200. The corona crisis makes things even worse. 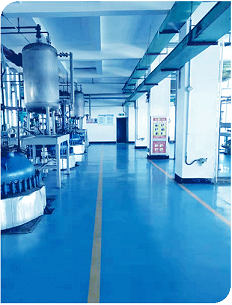 The highly motivated people in charge stay optimistic. The challenges they have had to overcome were huge. If they succeed, their satisfaction is likely to be better than financial reward. One if the members of the board puts it as follows: ‘In major companies, one works from decision moment to decision moment. If the development doesn’t fulfil that moment’s criteria, your project is finished. In small companies, you set out a new course and take up the challenge.’ Nabriva is now looking for approval in China. And for possible application against pneumonia that often pops up as a side effect of corona. The latest news is that the Chinese APICDMO company produces lefamulin in the quantity of 500 kg per month.