Over the past few decades, our knowledge of bacterial mechanisms intended to circumvent antibiotics, has increased a lot. We know down to the atom where the antibiotics attack the organism; and which defence mechanism the bacterium develops in order to invalidate the point of attack, or hide it. And yet, this entire body of knowledge hardly supplied us with new antibiotics, let alone better ones. Strange! Is our approach invalid, or maybe our logic? Our approach is quite reductionist. We target a single pathogenic bacterium in a specific property. We do so, using a single antibiotic that frustrates precisely that property. If resistance pops up, we again try to resolve the matter with a single specific approach. What if we developed a more holistic approach? Shot a series of arrows all at once? For mutations don’t come on their own either. Or maybe, we should develop more combination therapies, like in Augmentin.

Project ‘100 years of antibiotics’
Episode 48. The search for new antibiotics, 2000-2020
Episode 49. Further along trodden paths?
Episode 50. Resistance, a second look
Episode 51. New antibiotics, how not to proceed. The story of lefamulin
Episode 52. Prospect of new tools?? 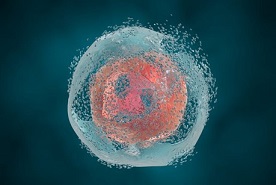 A biological cell falling apart upon attack by an antibiotic (lysis). Photo Shutterstock 343092215

Resistance as a natural phenomenon

Microorganisms like pathogenic bacteria are under constant threat from their environment. They are threatened by organisms of the same kind, viruses, phages and in unfortunate circumstances also by antibiotics. Their environment is in permanent change, and they evolve with it. Maybe that’s why some naturally occurring antibiotics are so extremely complex in structure and diverse in composition. Microorganisms also ‘learned’, because of the unremitting environmental pressure, to pass on defence mechanisms to each other, in all sorts of ways. Including the exchange of genetic information and ‘secrets’, in order to defend themselves against attackers. In the world of microorganisms, genetic modification is a common phenomenon. Clear signs of resistance have been found in 30,000 year old DNA of bacteria from the permafrost. Each and every soil bacterium has characteristics of resistance; even though they never came across the antibiotics in question. Bacteria have become just a little bit smarter as the result of the exuberant humane and veterinary use, during a mere half century. 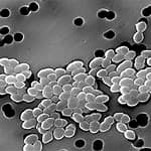 How big is the problem?

There is an overload of messages on risk, in the news and in literature. They often present us with impressive numbers. But often, we don’t have at hand figures on comparable parameters; they would allow us to judge such information. An example. The incidence of death by a bacterial infection is an order of magnitude lower than during our grandparents’ lives. But we judge from a risk perception of about zero, and then worries may strike, or even fears. In order to put matters into perspective, let’s have a coarse look at the main causes of death in the past decade (worldwide).
– Worldwide, the daily number of deaths is about 160,000
– Of those casualties, about 75% are caused by non-infectious conditions; among them, 2/3 due to cancer and conditions of the heart and arteries (80,000 daily)
– And about 15% of casualties is due to infectious diseases; infections of the bronchi and lungs take almost half, the largest group. TBC has the highest incidence of casualties among the simple infections: 3,000 casualties daily.
The most dangerous bacterial infections are: anthrax, tetanus, leptospirosis (a.o. Weil’s disease), tbc, pneumonia, cholera, botulism, pseudomonas, MRSA infections, meningitis, gonorrhoea, the plague and syphilis.

Of course, we mainly find resistant organisms on locations where antibiotics use is high: care homes, hospitals and intensive livestock farming. If we should stay in the hospital for 4 weeks, the chance to contract the nasty hospital bacterium, C.difficile, amounts to over 50%. Fortunately however, the use of antibiotics in most Western European livestock farming has been reduced by more than 50% since 2015.

Experts have made surveys of the incidence of resistance: which bacterial species may contain resistant strains, for which antibiotics. Such surveys are long. As a matter of fact, we don’t have medicines at hand, able to kill all pathogenic bacteria; but then, we never were in  such a condition. 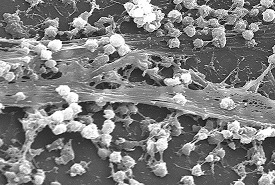 A biofilm of Staphylococcus Aureus on the inside of a catheter. This image was copied from wikipedia:en. Obtained from the CDC Public Health Image Library. Image credit: CDC/ Rodney M. Donlan, Ph.D.; Janice Carr (PHIL #7488), 2005.

In earlier episodes, we showed that antibiotics can attack the bacterium in several locations. According to their point of attack, we distinguish five classes of antibiotics. Two attack the cell wall. The first one by standing in the way of proper cell wall construction, or even preventing it; causing the bacterium to be punctured so to speak. Unfortunately, not all pathogenic organisms have a cell wall. The second group changes the cell wall’s properties; then the medicine can still sneak in. They can turn a fatty cell wall into a hydrophilic one; or they can move the polarity (charge differences) on the wall. Three classes of antibiotics operate within the bacterium. A large group of agents disturbs the build-up or the functioning of the genetic code. Another group prevents the production of important proteins. And a last group acts to frustrate all sorts of processes within the cell, like the production or transport of essential molecules (remember the prevention of folic acid production by the sulfas). 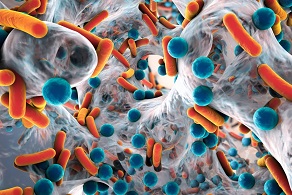 Many defence mechanisms of the bacterium are founded in natural, inherently present properties. A fatty, hydrophobic cell wall will not easily allow charged or hydrophilic agents to pass through. Moreover, most bacteria contain a mechanism, a pump, that allows them to eject unknown molecules as fast as possible. We know as many as five different types of such ‘pumps’. They may be installed or activated just at the arrival of a new foreign molecule (a new antibiotic). But all living cells have some sort of transport system. That makes sense, for all those DNA fragments, proteins, fats, sugars and what not, have to be not just produced, but transported to the correct location as well. The cell can use all these mechanisms for ejecting an unwanted product; or the other way around: for smuggling in a medicine.

And then, each bacterium will act against all medicines that threaten its existence. Then, the number of options it has, is large. Changing the metabolism (the processes within the cell). The genetic machinery (mutations). And above all, copying genetic improvements from its fellow bacteria. Some even copy the resistance from other microorganisms like viruses or phages. We don’t know to what extent such mutations are random; but mutants that effectively deal with an antibiotic will have the best chances of survival. Although mutations may imply a weakening of the bacterium in other properties. The organism can use all these tools for the ejection of the intruder from the cell; or for the disarmament of the intruder; or for changing its goal, or making it impossible to attain this. The important example: the beta lactamase enzymes that we dealt with, that sooner or later stand in the way of the activity of any penicillin or cephalosporin molecule.

Many bacteria can form a biofilm as a specialty defensive mechanism; a sticky composite of many cells glued together, consisting of the same or of different bacterial species. We humans also produce such biofilms in our (healthy) gut flora; that will protect us from attacks on our immune system. In the film, bacteria are encapsulated by a layer of sugars, that also contains proteins or DNA material. This hinders to a large extent the entrance of foreign molecules (antibiotics). Moreover, the bacteria in the film colony grow slowly; that makes them less vulnerable to substances that impede growth or cell division. But the most important aspect: the bacteria within the film have more opportunities to exchange genetic properties. Like resistance.

Popularly, the MRSA bacterium is known to be very dangerous and resistant to a large number of antibiotics. And as a matter of fact, its track record is impressive. Check the table: the bacterium uses its entire inventory, more or less effectively, against almost all medicines known to us.