From times immemorial, garlic has not just been looked upon as a food, but as a medicine as well. The well-known clove figures in each old medicinal text, as a cure for many conditions. How does this stand up under modern scientific scrutiny? Garlic, according to many articles, is a crop with a very complicated composition. A composition that changes quickly as soon as it is being exposed to the air, sliced or crushed. Which ingredients contribute to the health effects of the crop? And does the characteristic smell play any role in that respect? 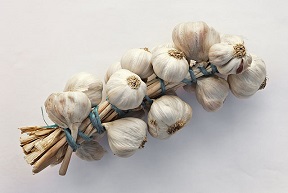 The use of garlic as a medicine is widespread among civilizations. As one observer puts it: ‘It is fascinating to observe how cultures that never came into contact with one another came to many of the same conclusions about the role of garlic in the treatment of disease. Garlic was used for labourers with a view to improving their work capacity. Garlic was recommended for pulmonary and respiratory complaints. Its efficacy in dropsy is compatible with known cardiovascular functions.’ And another one: ‘Medicinal properties of garlic (Allium sativum) have been widely known and used since ancient times till the present. Garlic enhances immune functions and has antibacterial, antifungal and antivirus activities.’

Does this stand up to modern scepticism and scientific scrutiny? Can we establish the chemical compounds responsible for these effects? And can we determine how much garlic we need to administer in order to arrive at certain effects (dose-effect relationship)? There is a wealth of literature on this subject, albeit rarely with firm conclusions. The phrase that we most commonly come across is ‘that we need more research to be done’. Not very promising in view of the widespread use of garlic, not just in the kitchen but also for medicinal purposes. Let’s have a look at the claims. 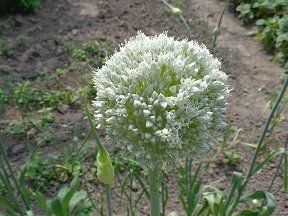 One of the most remarkable claims nowadays is that the crop has anticarcinogenic properties. ‘Epidemiological as well as laboratory studies have shown that garlic consumption reduces certain cancer incidences in the stomach, colon, mammary, cervical, etc.’ But then, this review article is unsure about the pathways of these effects. And it doesn’t come close to establish a dose-effect relationship. Instead, it concludes: ‘future research should standardize the dosage of garlic and type, i.e., whether it should be taken fresh, cooked, or aged.’

But then, this review article is unsure about the pathways of these effects. And it doesn’t come close to establish a dose-effect relationship. Instead, it concludes: ‘future research should standardize the dosage of garlic and type, i.e., whether it should be taken fresh, cooked, or aged.’

In another review article, the authors note that almost all studies done on the effect of garlic are ‘observational’, i.e. not conforming to rigorous scientific standards. And that we cannot deduce any dose-effect relationships from them. They wonder if we shouldn’t consider an alternative explanation: the amount of vegetable intake. Often, high garlic intake and high vegetable intake go hand in hand. And there is evidence already that eating many vegetables will protect us somewhat from stomach and colon cancers.

A third review article accepts the ‘anticarcinogenic potential of garlic and its constituent compounds.’ These have the ‘ability to block experimentally induced tumours’ (in animals or people?) ‘in a variety of sites including skin, mammary and colon,’ and this ‘suggests a general mechanism of action.’ But this article too, doesn’t reach firm conclusions. These articles reflect recent developments. In the thick PDR for Herbal Medicines, third edition (2004), the anticarcinogenic properties of garlic are almost mentioned in passing. With the inevitable remark that results need to be validated.

Traditionally, other effects have been attributed to garlic. Among these are lowering of blood pressure and cholesterol concentration, which lower the risk of cardiovascular disorders. Garlic has antimicrobial and antiviral properties. It prevents aggregation of platelets (and can therefore prolong bleeding time) and promotes the breakdown of blood clots. In folk medicine, PDR tells us, garlic is used internally for treatment of the common cold, inflammatory respiratory conditions, whooping cough and bronchitis. Against flatulence and gastrointestinal spasms. Against menstrual pains and diabetes. Externally for treatment of corns, warts, muscle pain and more.

As for cardiovascular disorders, a 2002 review article concludes that garlic consumption does reduce the progression of cardiovascular diseases. ‘The wealth of scientific literature supports the proposal that garlic consumption have significant cardioprotective effect, which include both animal and human studies.’ But dose and duration of garlic intake aren’t always clear. Therefore, ‘further research should also be carried out to identify specific compounds from garlic or garlic products that are responsible for most of its biological effects.’

Alliin, Alliin, the main chemical in garlic. With two chiral centres and four functional groups, an interesting candidate for physiological activity. But mentioned nowhere as a medicine.

Garlic’s smell is caused by a number of sulphur-containing compounds. The most abundant of these is alliin. This odourless sulfoxide is a natural constituent of fresh garlic, a derivative of the amino acid cysteine. It is supposed to be the main chemical responsible for the strong antioxidant and hydroxyl radical-scavenging properties of garlic – probably an important source of garlic’s health effects. Alliin was the first natural product found to have both carbon- and sulfur-centered stereochemistry.

But when garlic is sliced or crushed, alliin is rapidly converted to allicin by the enzyme alliinase. Allicin is the main substance responsible for the odour of fresh garlic. But allicin itself is unstable and quickly changes into a series of other sulphur-containing compounds such as diallyl disulphide. Allicin is part of a defence mechanism against attacks by pests on the garlic plant. In vitro, the substance shows strong antibiotic effects, among others on the infamous bacterium MRSA. But it is unclear if it will also be effective in vivo. The substance’s biological activity can be attributed to both its antioxidant activity and its reaction with thiol-containing proteins.

Ajoene, a topic in many medical publications. However, no registration as a medicine.

More recently discovered is ajoene (actually a mixture of four stereoisomers). Also a decomposition product of allicin, it is best preserved in macerate of garlic (chopped garlic in edible oil). It has many medicinal uses. It is a strong antioxidant and has broad-spectrum antimicrobial (antibacterial and antifungal) properties. Moreover, it can inhibit several viruses, like herpes simplex and human rhinovirus parainfluenza. 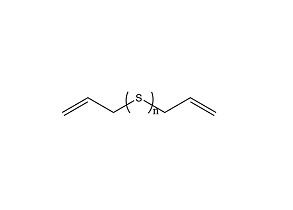 Di-allylsulphides, n = 2, 3 or 4. Also derived from allicin, and with much supposed medical  profit.

Diallyl disulphide and diallyl trisulphide, also decomposition products of allicin, also show medicinal action. Diallyl disulphide has many of the health benefits of garlic, but it is also causes garlic allergy. It is the main component in garlic oil that inhibits the growth of moulds and bacteria. It appears to be an agent against colorectal cancer. Diallyl trisulphide has been shown to selectively kill cancerous cells in the prostate and breast, leaving healthy cells unharmed.

Processed garlic contains a wider variety of organosulphur volatile substances than the intact garlic clove. Typical volatiles that have been identified in crushed garlic and garlic essential oil, apart from the substances mentioned already, include methylallyl disulphide, methylallyl trisulphide, 2-vinyl-4H-1,3-dithiin and 3-vinyl-4H-1,2-dithiin. And garlic contains saponins, substances with a water-soluble and water-non-soluble structure. They protect plants against microbes and fungi; but haven’t been well researched for use as a medication to humans.

Most of these substances are lipophilic, i.e. better soluble in nonpolar solvents than in water. But garlic components soluble in water may even have more important medicinal functions. These substances are promoted by a process called ‘ageing’ of garlic. This is done for instance by storing intact garlic cloves in vinegar with oregano. Make sure to ‘burp’ the lid in order to release gas build up. Garlic should be aged a minimum of 3 weeks before eaten. The longer you age the garlic, the milder it becomes. Once the ageing process is complete, garlic can be eaten raw or added to dishes.

Even more radical is the preparation of AGE, Aged Garlic Extract. ‘AGE is created by slicing, chopping, or crushing garlic bulbs and immersing them in ethanol alcohol or water for a specific amount of time, usually between 18 to 24 months.’ In this process, allicin will be decomposed; other antioxidants and phytochemicals emerge or become stronger. Alcoholic and aqueous garlic extracts primarily contain S-allyl-L-cysteines (SACs). Numerous compounds have been detected in AGE that have the potential to affect immunity, including the lectin family. The preparation of AGE  is supposed to eliminate toxicity and other unfavourable characteristics of garlic, and may allow it to be combined with other medicines without undesirable side effects. Among others, it can be used together with the anticoagulant warfarin. Garlic oil, obtained through steam distillation of the crushed bulb is registered for treatment of hypertension high blood cholesterol.

Summing up, the conclusions of Commission E still hold. It finds proof of the following actions:
– Antibacterial
– Antimycotic
– Lipid-lowering
– Inhibition of platelet aggregation
– Prolongation of bleeding and clotting time
– Enhancement of fibrinolytic activity.

But on the whole, the field is a mess. There is a large number of claims. Most of them not well substantiated. Even in serious literature. Most effects are not well researched for their causes  and should be elaborated in more detail.