The Earth heats up; and in this process, towns are among the areas most hit. Buildings and streets tend to store incoming radiation. Towns urgently need to be turned greener, if only with the goal to keep them liveable. Green roofs are important agents in that process. They can lower ambient temperatures by 2oC, inside temperatures even by 4oC. 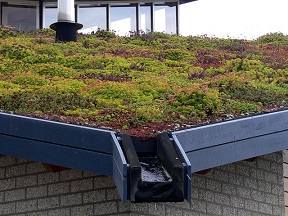 At times, the changing climate shows itself in the other extreme, excess rainfall, causing flooding. Green roofs are an agent in preventing such events. They store the rainwater. They act as a sponge, in which the substrate of the green roof and the roots store the water. If extreme rainfall occurs, less water therefore will end up in the sewer. Green roofs promote biodiversity as well: they act as a home and foraging area to birds and insects. And as if that isn’t sufficient, green roofs cool down their environment, which results in higher efficiencies of solar panels.

In the Netherlands, the largest environmental protection foundation now started a campaign for green roofs (all links in Dutch). They claim that in the Netherlands, 2 million flat roofs can be fitted with a green cover, equalling 21 million m2. Many of these flat roofs are smaller than 20 m2: sheds, garages and extensions. Such areas can easily be covered by the owners with a tapestry of sedum plants. 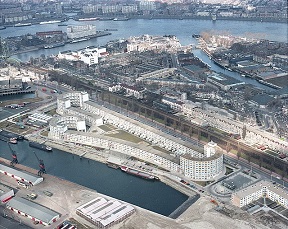 Building ‘De Peperklip’ in Rotterdam from above (not yet fitted with a green roof). Photo: Wikimedia Commons.

Large roof area scan be fitted with a green cover as well – more the trade of professionals. A major project is the roof of the Doelen building in Rotterdam, a congress and concert hall. The flat roof of 2,581 m2 will be fitted with a large variety of plants, and a water containment of 300 m3 will also be constructed. Underneath the roof, a system with crates will store rain water. The large variety of plants is exceptional. The roof will contain several indigenous herbs, bulbs, ornamental grasses, plants and shrubs. The project will host five insect hotels and the cover will attract bees, butterflies and birds. The project therefore will contribute to the town’s biodiversity.

Rotterdam also hosts the apartment building ‘De Peperklip’. The entire roof, 7,600 m2 in size, has been fitted with a green cover in 2020, now ‘the longest natural roof in the Netherlands’. Fitting the roof with the green cover happened together with a renovation of the roof, that could otherwise not have carried the extra load. Yet, the extra cover could only be 6 to 20 cm thick. Within that border condition, the designers have allowed as many plant species as possible to develop. Four themes of natural development have been spread across thirty patches. From above, birds and insects can spot the differences between them, leading to more biodiversity.

In towns, green roofs are of the essence nowadays, as the climate is changing. Many stakeholders – house owners, occupants, local authorities – can take care of such projects, speeding them up.