Costs of producing renewable energy keep coming down; and technologies for cheap energy storage keep evolving. Therefore, the eternal problems with solar and wind energy appear to be more and more outdated (‘what to do if the sun doesn’t shine and the wind doesn’t blow’). In the past, we already devoted our attention to this issue. Now we shed light on two new technologies, based on iron and basalt. The Dutch TV program Tegenlicht devoted attention to them, this week.

Many energy storage technologies run into the problem that they make use of scarce materials. An important energy storage technology, the battery, requires the use of cobalt. This metal is often being mined in abominable conditions, primarily in Congo. In other versions, batteries need lithium – not a scarce material but mainly found on Bolivia’s high-altitude plains. What geopolitical problems will arise from these new technologies, if deployed on a large scale? Iron and basalt on the other hand, that we highlight here, belong to the most abundant materials in the earth’s crust. Mining them stands little chance of running into difficulties because of worker’s exploitation or the involvement of warlords. 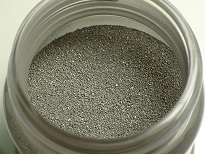 Cheap energy storage in iron
Iron can burn – if powdered, and in contact with oxygen. This process can produce high temperatures, up to 1800oC (N.B. most links are in Dutch). Because of this temperature, the process can be useful to industry. This uses a lot of steam at high temperatures, up to 450oC. And if we have steam, we can also produce electricity, by means of a steam turbine. The energy density of iron is high, comparable to that of gasoline or diesel oil. A major advantage of the material is that we can store it easily for a long time, provided it doesn’t make contact with oxygen. In course of time, iron might even be a useful fuel for lorries and ships. This energy technology doesn’t produce any CO2. It does produce rust; this needs to be recovered and processed back into iron metal. Treatment with hydrogen will do very well for this purpose. If hydrogen is produced sustainably, for instance by electricity from solar or wind, this will constitute a renewable energy system. In it, solar and wind energies are stored in the form of iron. The attractive characteristic of this scheme is that we can burn iron where there is much demand for energy; and that we can reduce the rust where there is much supply of cheap energy. This implies that we will have to organize a major transport loop: transporting iron to energy intensive areas, and of rust the other way around. But bulk carriers are in ample supply; they can carry iron powder viz. rust around. Of course in such a scheme, we will have to accept the inevitable energy losses.

By the end of 2020, the Bavaria brewery in Lieshout (the Netherlands) was the first to deploy an iron incinerator (100 kW) in their process. Technical University Eindhoven lends technological assistance to the project. The team raised their glasses of beer brewed on iron fuel. Chan Botter, the leader of the SOLID student team, tells TUe magazine that their next goal is a 1 MW device. Moreover, they plan to construct a 10 MW machine to be ready by 2024. ‘We aim for refurbishment of the first coal-fired power station before 2030.’ 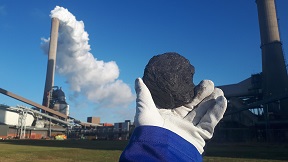 In the future, we can fuel old coal-fired power stations (see photo) with heat stored in stone. Photo: Wkimedia Commons.

Cheap energy storage in stone
Another innovative technology for cheap energy storage is storing heat in stone. In lava, like developed by Siemens Gamesa, or in basalt, like developed by the Dutch inventor Cees van Nimwegen. Both minerals are in ample supply in the earth’s crust. The principle is simple. The rock, with a temperature that can be as high as 750oC, is encapsulated in a very well insulated ‘container’ and stores the heat for a long time. This technology allows for storage of a lot of heat, and energy losses in this section of the system are low. Industries that aim for improvement of their sustainability scores can install such a heat storage; with it, they will overcome the intermittent character of renewable energy supply. The heat from the storage can also be used for the production of electricity in a steam turbine. Then there are major energy losses, comparable to those in electric power stations, that don’t have an energy efficiency much higher than 45%.

According to Siemens Gamesa, here is our opportunity to transform existing gas or coal-fired power stations to renewable power stations. Again, this technology uses the heat collected in the stone. The heat storage replaces the boilers that burn the coal. If there is a demand for energy, water is being transported through the stone; the steam produced fans a turbine. The heat that is left over can be used for district heating, just like with the existing coal-fired power station. Again, this coal-fired power station! The major advantage of both proposals, particularly the last one, is that they make use of existing infrastructure. The building is already there, and it is connected to high-voltage lines that distribute the electricity produced. This system allows us to store an excess of renewable energy in the summer, and distribute it again in the winter. Or we store energy in daytime and produce it again at night. A smart idea to deploy cheap energy storage in order to keep in use existing infrastructure. Which proves that renewable energy doesn’t just produce disruptive changes. Like in all innovations in the early stages of their learning curves, human creativity comes up with many surprises. As almost everyone is convinced now of the need for the transition to renewable energy, we will often return to this subject.

Interesting? Then also read:
Energy storage, its role in the transition
Methane pyrolysis turns a grey resource into a green one
Renewable energy system costs – the untold story