You are here: Home / 2020 / May / Methane pyrolysis turns a grey resource into a green one

Bio is in. Chemistry is out. Green is in. Grey is out. And the Netherlands (my home country) should rid itself from its dependence on natural gas. These are popular opinions in ‘climate conscious’ circles. Yet there are ‘chemical’ processes that yield ‘green’ fuels. Methane pyrolysis is one of them. 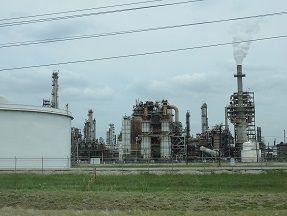 Oil refieneries are the primary producers of hydrogen now. They emit major quantities of carbon dioxide in the process. Photo: Wikimedia Commons.

All combustable materials (fuels) that contain carbon will emit carbon dioxide (CO2) to the atmosphere when burned in the air. It doesn’t matter if that fuel consists of wood, biomass, biogas or fossil fuel (peat, lignite, coal, oil or natural gas). The CO2 escapes to the atmosphere as the fuel is burned. Nature will remove just half of it quickly. The remainder will stay in the atmosphere for hundreds to thousands of years.

Do fuels exist that don’t emit carbon dioxide (CO2) into the atmosphere upon combustion? We can call those fuels ‘green’.

For decades already, policy makers discuss CO2 capture near combustion processes in industry. That CO2 would have to be stored in old gas wells. This is ‘Carbon Capture and Storage’ (CCS). In spite of good intentions, very few applications exist of this technology. It requires major investments. It is a complicated technology that requires much energy to capture and store CO2.

And it’s true: if we apply CCS, hardly any CO2 will be emitted, even if we burn fossil and other carbon-containing fuels. But would we then call those processes ‘green’? Some think we should. In particular if we use biofuels and apply BECCS. Meaning Bioenergy with Carbon Capture and Storage.

And yet, prevention is better than cure. Better not produce CO2 than capture and store it. Because there are alternatives. One of those isn’t exactly new, but it generates much too little attention from politics and the media, compared to (BE)CCS. It is methane pyrolysis. 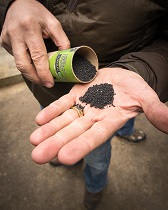 One of the uses of carbon is as a soil improvement agent (biochar). Photo: Wikimedia Commons.

Turn a grey resource into a green one

As the name indicates, hydrocarbons are compounds consisting of carbon and hydrogen. If we could separate the two, we could use (gaseous) hydrogen at a major scale as a clean fuel; we could store the (solid) carbon or even put it to good use.

It is easier, cheaper and safer to store solid carbon than to store gaseous CO2. Moreover, the (very pure) carbon has old applications (car tyres, printing ink) and many new ones (carbon electrodes, soil improvement).

Of all hydrocarbons, the H/C ratio is highest in methane (CH4, natural gas). So it is logical to prefer natural gas as the feedstock for hydrogen over other hydrocarbons. One cubic metre of methane will yield two cubic metres of hydrogen after direct separation (‘cracking’ or ‘decarbonization’).

In order to crack natural gas, it will have to be heated to 800-1000 oC. We call that process methane pyrolysis (separation in the absence of air and water). We can supply that heat by concentrated solar radiation, electricity or another heat source. Catalysts can effectively lower process temperature. We can show the energy balance for this endothermic (heat requiring) process in an image (from: Rodat et.al., 2010). 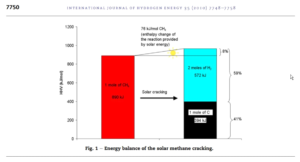 Researchers have been experimenting with several methods to scale up methane pyrolysis for some thirty years already. See the references at the bottom. But industry shows virtually no interest.

The process of steam reforming (SR) exists almost a century, it has been perfected to a large extent, and it is the cheapest way at present to produce hydrogen. Since World War II, SR has been used large-scale to produce ‘syngas’ by heating coal and steam. Syngas, a mixture of hydrogen and carbon monoxide, has many applications in the (petro)chemical industry. And it used to be produced in local gas works, for supply to households. But when natural gas fields like the Groningen field were discovered and developed, it was substituted by a safer and cleaner fuel: natural gas.

As long as the oil companies can use major quantities of cheap natural gas; and as long as they own both the infrastructure (refineries) to operate the SR process cheaply, and empty gas wells that can be used for CO2 storage, they won’t be interested in producing hydrogen through any other process than the SR process, using natural gas and catalysts (steam methane reforming, SMR).

The SMR process produces about 10 kg of CO2 for each kg of hydrogen.
CO2 that is now emitted into the atmosphere. On a world-wide scale this boils down to 500 megaton CO2 annually. In other words, not a climate friendly process. If we should use methane pyrolysis, these emissions can be reduced to almost zero.

Demand for hydrogen will rise because of applications in other sectors than chemical industry. Hydrogen is a promising clean motor-car fuel, it can be used for interim energy storage, and as an industrial and domestic fuel that can be distributed through the present natural gas grid. Large-scale hydrogen production by water electrolysis is not competitive to other technologies for the time being, because of the high electricity input, about 40 to 53 kWh per kg of hydrogen. According to another source, the average electricity input for modern electrolysers is between 4.3 and 4.9 kWh per m3 (=90 grams) of hydrogen.

Investment in methane pyrolysis is of major importance, in order to develop this technology beyond the pilot phase. But this will not happen easily without government support. The best instrument would seem to be charging CO2 emissions with a levy. But just some interest from the side of policy makers might do a lot of good for this development.

Small, somewhat haphazard pilot projects like that at TNO in the Netherlands do not develop enough pace. If CO2 emitting processes will be charged with a levy, the SMR process will in the end prove to be too costly; cleaner alternatives will become more cost competitive. ‘Green’ hydrogen from natural gas deserves a better future.