Whereas the artificial hamburger has been launched with a lot of fuss a few years ago, artificial seafood has been developed in relative quiet. But it may come to the market much sooner. Texture and taste seem to be good, already. Prices come down fast. But will the consumer like seafood from the lab? Seafood 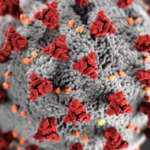 At present, the world is under the spell of a new influenza virus, Covid-19. One region after another goes into complete lockdown; in particular to prevent the virus to spread with such speed that hospitals would be overburdened. The virus is particularly contagious as this viral species is new; people have not yet had the

Last month, Chemical and Engineering News devoted an article to biobased aromatics: aromatic compounds derived from biobased resources. Much is going on here. This developing sector holds the promise that it will be able to produce aromatic compounds cheaper than the oil industry, and sustainably as well. As Vito’s Ludo Diels, one of the researchers