You are here: Home / 2020 / March / Traditional Chinese medicine as a source of innovation

Chemical and Engineering News recently ran an article that sheds light on the importance of traditional Chinese medicine for modern scientific development. Traditional treatments inspire the discovery of insecticides and antimalarial drugs.

The herb Stemona sessilifolia has been used in traditional Chinese medicine as an insecticide for hundreds of years. It moreover combats parasitic worm infections in people. It’s insecticidal activity has now been shown to be the result of symbiotic bacteria living in the plant. Researchers of Nanjing University of Chinese Medicine, Xiachang Wang, Lihong Hu and their colleagues, investigated which natural insecticides are produced by these microbes. This might help to develop biologically-inspired insecticides and agricultural chemicals. Toxicity of agrochemicals is a growing problem, as well as resistance that insects develop towards them; if we would stay closer to nature, we might do less harm to the environment.

It is quite common for higher organisms to host useful microorganisms. Humans are no exception to this rule. According to a recent estimate by the US National Institutes of Health (NIH), a stunning 90% of cells in the human body are bacterial, fungal, or otherwise non-human. These endophytes, as they are called, perform all kinds of functions. In plants, some protect them from pathogens or stressors like drought, while others help the plants obtain nutrients. These microorganisms can also produce a range of compounds useful to the higher organism, like insecticidal agents and anticancer compounds.

In their research of S. sessilifolia, the Chinese team isolated a Streptomyces bacterium from within the plant stems. They then identified ten compounds produced by these bacteria, thought to be insecticides. These were pyrroles, a class of compounds that is well-known for insecticidal activity. The team researched the efficacy of each of these compounds individually, and as a mixture, on aphids and spider mites. The crude extract showed the best insecticidal activity for the aphids, killing almost all of them and performing nearly as well as a commercial insecticide. The individual compounds killed only about 80% of the aphids. Neither the individual compounds nor the mixture was very effective against the spider mite, killing only 50 to 80% of them.

CEN cites Souvik Kusari of the Technical University of Dortmund, a researcher in this field not involved in the study. Over the longer term, he foresees a high potential of endophytes in crop protection. If not very toxic to humans, they could replace harmful chemical pesticides. 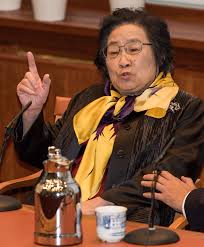 The discovery of artemisinin

This discovery of useful treatments in traditional Chinese medicine is one in a series. Like the discovery of artemisinin, the most powerful antimalarial drug known at the moment. Its discovery dates back to the Vietnam war. In this war, many North Vietnamese soldiers died from malaria. When the North-Vietnamese leader Ho Chi Minh asked China for help in the development of an effective medicine, Mrs. Tu Youyou was appointed head of the (secret) research group in question. Her group looked for ancient medicines and screened 2,000 prescriptions of traditional Chinese herbs. Among these was the preparation of an extract of sweet wormwood (Artemisia Annua), found in a 1,600 year old text. This extract proved to be an effective medicine against malaria, saving many lives. Tu also studied the structure and pharmacology of artemisinin. She brought the research into the open and completed it. The genetic information of artemisinin production was later transferred to yeasts, allowing for an industrial production of the drug. In 2015, Mrs. Tu Youyou won a well-deserved Nobel Prize for her research.

Interesting? Then also read:
Antibiotics resistance, do ants have the solution?
Reductionism and holism in the life sciences
Psychology of innovation: biotechnology should learn to listen!