Fish farming is increasingly important. More than half of the fish consumed by mankind is farmed fish already, and its share is on the rise. Without fish farming, we would not be able to consume our average diet of 20 kg fish per year (an amount that has doubled over the past 50 years). But fish farms run into major sustainability problems. How can we sustain this growing sector? 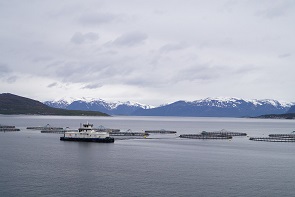 Salmon farm in a Norwegian fjord.

Over the past decades, salmon has become a popular ingredient on our plates. But wild salmon is difficult to catch, so the rising popularity of the fish has gone hand in hand with the growth of large salmon farms. In areas where there is enough room for large and deep cages, like the Norwegian, Scottish and Alaskan fjords. The environmental problems posed by these salmon fish farms have become clear by now. The most directly felt problem is the omnipresence of the sea louse, a tiny parasite, on caged salmons. The lice attach to their heads and bodies. Eventually they may kill them or at least make them unsuitable for human consumption. This has caused major losses in salmon farms. Attempts to contain the problem include adding medicines to the fish food, adding fish species that graze on the lice, methods to clean the salmons mechanically, improvement of natural resistance through breeding and vaccinating fish individually. All these solutions have their drawbacks. And all fish farms have to deal with the problem that even though many fish live in schools by nature, the room in the cage may be too limited for a display of their natural behaviour.

Recently, evidence has surfaced that salmon cages may not at all be harmless to their natural environment. They seem to obstruct migration of wild salmon between rivers and the ocean, causing a sharp decline in their population. Excrements gather on the floor of the fjord, a problem because narrow fjords have little water circulation. And then there is the issue of the fish food. Salmons are predators and hence have always been fed fishmeal from species like anchovy. So in order to feed caged salmons, we have contributed to overfishing the oceans. It takes 1.3 kg of wild fish to produce 1 kg of salmon. Outside of Europe, it is still very common to use poultry by-products, regarded as a highly nutritious and cheap protein resource. But so far, in order to produce salmon with the highly praised omega-3 fatty acids, they need to eat fishmeal. They don’t produce these substances themselves but ingest them from their prays. Ultimately, omega-3 fatty acids stem from marine algae and are passed up the food chain. So it’s good news that Veramaris, a joint venture of Evonik and DSM, now produces them from sugars, with the algae as their work horses. This is a step towards an increase in vegetal food, reducing pressure on the fish population in the oceans. And much more use is made nowadays of fish trimmings, by-products of processing herring and other commercial fish. 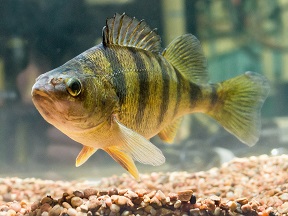 Yellow perch, a relative of the jade perch.

But the majority of fish farms worldwide are in basins and contain fresh water species. Fish like tilapia, catfish and most of all, carps. Global farmed common carp production is 4 million tons annually, much more than farmed salmon. All in all, six hundred species are grown in fish farms, many more than the fifteen animal species in animal husbandry, globally. All these species have requirements of their own in terms of environmental and water quality. We would wish that these animals enjoy a good life in almost natural conditions; like chickens in the Roundel and Kipster farms developed over the past few years. But it may take a while before we have established the optimum growing conditions for all these species.

So it was good news to come across the innovative fish farm concept developed by the Belgian entrepreneur Stijn Van Hoestenberghe. He uses aquaponics, a system that combines fish and plant growing. But he added a new twist to it. In traditional aquaponics, the plants grow on the fishes’ excrements in the same basin. But Van Hoestenberghe separated the two. He purifies water contaminated by fish excrements and uses the sludge to fertilize tomato plants in a nearby greenhouse. ‘A standard continuous-flow system, like an open cage, produces twenty to thirty thousand litres of waste water per kilogram of fish produced. We use a hundred litres per kilogram of fish,’ Stijn tells the site eostrace.be. The greenhouse in turn produces heat that is used for heating the fish farm. And another innovation, equally important: Stijn’s fish farm grows a veggie fish, the Australian Jade Perch (Therapon barcoo), a freshwater fish that grows on a purely vegetal diet. And it contains many omega-3 fatty acids. Moreover, it swims in tight schools which is a strong point for farmed fish.

‘When I looked for species that could do well in fish farms, the Jade Perch was on the top of my list,’ says Stijn. ‘But there are more species that could do well in our growing system. Right now we experiment with fresh water lobsters, as an alternative to scampi.’ And he explains that traditionally, mankind always consumed predator fish: we could angle them using worms. But veggie fish will escape that fate. In fish farms, we need to apply the reverse order. For reasons of sustainability, we need to look for non-predatory species that are much less of a burden to the earth’s resources. But so far, most of the species people know are predators. ‘I am a scuba diver,’ says Stijn. ‘I have witnessed the devastation that fish farms produce underneath the water line. Many fjords with major fish farms are almost dead. The problem is: that is invisible to most people.’ Therefore, he devotes his life to producing sustainable fish, that carries an excellent taste as well. Reversing the order of fish on our plates: it may take some time.