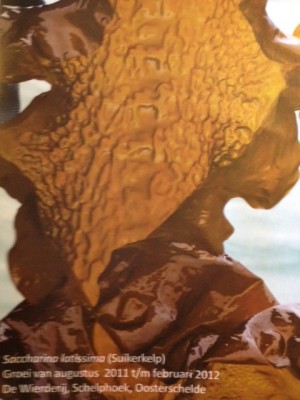 Seaweed for human consumption. In the Far East, it has been on the menu for ages. In our bioshops it is quite expensive nowadays – but in the Western world, seaweed harvested in the wild, was poor people’s food, and otherwise used as fodder and as fertilizer. People looked upon it as inferior to fish, as an analogy to soy and beef. But this will change: the sea has an enormous potential for producing food and fodder, and the weeds are rich in minerals and chemicals. Products like marine proteins and phosphate, which will come in short supply.

Fish farms and seaweed farms are complementary
Sea farming is on its way. And rapidly so. Plans are of a tall order. That was apparent in the 18 and 19 September First International SeaGriculture Sea(weed) Farming Commodities Conference, aptly organized on ‘Neeltje Jans’, the artificial island in the Eastern Scheldt (Zeeland, The Netherlands), from which forty years ago the Delta Works started. Now, plans were made and presented to cultivate and harvest macro algae, i.e. seaweed, in coastal areas, between wind turbines, and even in the middle of the ocean. Harvesting seaweed is much easier than harvesting micro algae. The big kelp varieties grow on lines or nets in cold water – planted in autumn and harvested before summer. Collected from underneath or mown from above. Present cultivation, or rather wild collection, is largely confined to coastal areas, sometimes combined with existing salt flats or fish farms. Seaweed needs fish excrements for its growth, and hence fish farms and seaweed farms are nicely complementary. Seaweed also thrives on all nutrients in human excrements carried by rivers, which makes for good seaweed cultivation near estuaries.

The next step is seaweed cultivation in between wind turbines at sea; after that, independent seaweed farms in the oceans might follow. Researchers have started experiments on areas of a few hundreds of square meters; but on the drawing table, there are ideas for ‘farms’ of hundreds of square kilometres in the middle of the ocean ‘deserts’, concentrated around floating production islands. ‘Seaweed farmers’ even talk about third generation biofuels from seaweed, because these would not even compete for land use.

Mapping the planet’s future
It is interesting to see how in such a small conference, with an attendance of some 50 researchers, decision makers and some (small) companies, the whole planet’s future is mapped. For clearly we need the sea for fuel, feed, fodder, chemicals and materials production, in order to meet continuously increasing human demand. 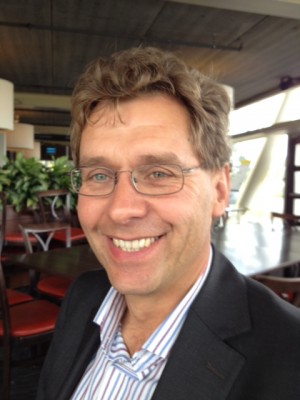 Most of the participants were Dutch. ‘The Netherlands may play a prominent role in this area.’ Says Job Schipper, managing director Hortimare, and the man around whom revolve almost all SeaGriculture activities in the Netherlands and in Europe. ‘And why? The Netherlands are prominent in offshore, and in agricultural mechanization, two areas indispensible for agriculture at sea. In particular when the sea is as impetuous as the North Sea’. Job Schipper: In seaweed cultivation, we just moved out of the stage of collecting, comparable to agriculture some ten thousand years ago. Now we research the growth of special seaweed species, favourable conditions for their health and growth, and the chemical products which we can extract from them. We improve seeds and mechanization, phosphor recovery and protein production (1500 kg of dry seaweed produces 200 kg of proteins), and we think that the increase in world soy demand can be substituted by seaweed. Long standing products from seaweed are UV-protective pigments, and fucoidine, an anticarcinogen which cannot be produced artificially. In short, we have only scratched the surface.’

Much European funding
Other countries are active in seaweed as well. In FP7 Europe will dedicate an appreciable sum for this goal. The Mermaid program will spend an appreciable percentage of its € 7.4 million budget to seaweed research. No less than four seaweed farms are funded in this program: in the Baltic Sea, in the North Sea off the coast of Texel, in the Gulf of Biscay, and in the Mediterranean Sea. The first pilot facility in the wild open sea has been built, 10 km off Texel where Ecofys anchored the nets last winter, and where Hortimare constructs an adjacent plant. They call the entire installation the North Sea farm.

Wageningen University department Plant Research International constructed a research facility in the Eastern Scheldt: the Wierderij, which they themselves call the first sustainable sea farm in the Netherlands, and where they do research on growth and yield of seaweeds, commissioned by Hortimare and others. Funded among others by Zeeland province. A European program At SEA, coordinated by Belgian Sioen Industries, intends to develop energy production from seaweed, and also special textile systems for cost-effective seaweed cultivation in the Western world. And there is ECsafeSEAFOOD for research on food security of seafood, among it also seaweed. In Brussels, so it seems, seaweed is judged to be pretty important.

All along Europe’s coast
Seaweed production and research advance rapidly. A nice example, presented at the SeaGriculture congress, is a Portuguese small company led by two researchers who produce seaweed in combination with crabs, on old salt flats. But in fact, the European coast in its entirety is fit for seaweed cultivation. And although Europe heavily funds seaweed research, European legislation still needs to be developed.