After an initial period in which ideas went in all directions, proponents of seaweed (macro-algae) in the bio-economy have now set down to the painstaking work of developing and fine-tuning their technologies. Single-product facilities, like for the production of biogas or proteins, have effectively been abandoned. It is now generally recognized in the sector that cascading is the way forward. So we see the seaweed biorefinery developing, with as its main product for the time being: animal feed. 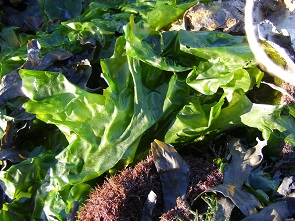 Ulva Lactuca (sea lettuce) is one of the species much researched. Photo: Wikimedia Commons.

Seaweed biorefinery instead of single-product facilities

Growing seaweeds has some important advantages. It doesn’t take up any land space, which means it doesn’t compete with forestry or agriculture. And the algae look after themselves. They don’t need watering, fertilizer or any extra light or heat; although they grow better in the presence of phosphate, like in combination with a fish farm or in the effluent of a sewage treatment facility. But there are inherent difficulties in harvesting and processing seaweeds. They contain a large amount of water, that needs to be removed. Grinding seaweed is difficult though, as many species have an in-built flexibility that prevents proper grinding. Therefore the isolation of valuable components requires a combination of chemical treatment and mechanical pressure – silage, as professed with grass, is a much researched option. But then again, we must make sure that the chemical treatment will not destroy the very components that we would like to extract, like many essential nutrients that can be used in the production of food and animal feed. Salt content may be problematic: this can cause severe corrosion in the equipment. Seaweed collected from the shore (as opposed to seaweed growing on lines) may come with a lot of abrasive sand. In short, the seaweed biorefinery requires a lot of research. But the sector is about to deliver major results.

Conform to the then prevailing views, at the beginning of the century most attention was given to energy production from seaweeds. As late as 2015, the Environment Committee of the European Parliament decided that ‘advanced biofuels sourced from seaweeds or certain kinds of wastes should account for at least 1.25 per cent of energy consumption in transport by 2020’ (European Parliament News, 2015). But then already, this goal was obviously unrealistic. In the same year, an IEA report listed the uncertainties to be overcome for the technology to mature: ‘the method of cultivation, the species of seaweed, the yields of seaweed per hectare, the time of harvest, the method of harvesting, the suitability of seaweed to ensiling, the gross and net energy yields in biogas, the carbon balance, the cost of the harvested seaweed, the cost of the produced biofuel.’ But by then, these remarks were outdated as well, because the sector was on its way already to develop the multi-product seaweed biorefinery – of which only the leftovers will be used for biogas production. 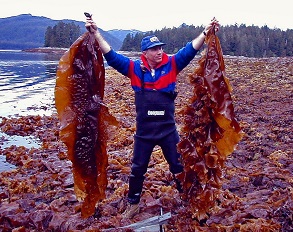 Much activity around seaweed biorefinery

One of the major seaweed biorefinery projects going on in Europe is MacroCascade, supported by the Bio-based Industries consortium. Its mantra is ‘scaling up the low-hanging fruits!’, indicating that a lot of research has been done that is ready to be scaled up to commercial production. Its aim is to use every bit of the harvested seaweed: first food and feed, and then intermediary products for healthcare, cosmetics, and fine chemicals industries. Side streams will be used for the production of fertilizer and biogas. MacroCascade aims to deliver a proof of concept for 2-3 patentable products, and also a blueprint for an LCA-assessed seaweed biorefinery. Another project is the international SeaRefinery project (Flanders, Denmark, Ireland, Iceland and Norway), that similarly intends to develop eco-friendly technologies for the extraction of high value-added components: antioxidants, antimicrobial components and hydrocolloids. Targeted compounds of the seaweed biorefinery include bioactive compounds like phlorotannins, fucoidan and laminarin. And the project will research new applications like textiles coating for alginate, a carbohydrate abundant in seaweeds. And there are many other projects going on, among them the Danish MAB 1, 2 and 4 projects, and the relatively young Swedish Seafarm project. The opportunities keep on expanding – one of the targets of these projects is to develop a new medicine from fermented seaweed.

So far, we just scratched the surface

Work on a seaweed biorefinery includes all aspects of growing and processing seaweeds, a clear indication that still much work has to be done. Work begins with testing methods of growing seaweeds along lines. Then harvesting and storage. When macro-algae are harvested, they break down quite quickly and therefore have to be preserved and stored efficiently until the biomass can proceed to the refinement process. Silage involves the addition of lactic acid bacteria to the biomass and the pH level decreases. The question is whether this alters or destroys any of the substances that should still be intact in the refining process. This again requires chemical analysis of the harvest in all stages of preservation. The fact that many substances are of interest, poses a challenge for researchers. The aim is to find fractionation methods that are sufficiently effective, yet gentle too – the core of the seaweed biorefinery. And to find a smart fractionation sequence that extracts substances (biochemicals, polymers, and food/feed additives) in the right order so that sensitive substances are not destroyed. Biogas production is still on the menu, but only as the final stage, when all marketable components have been extracted.

In short, a lot of work needs to be done. The first products of seaweed biorefinery have come to the market. But then, as Dutch entrepreneur and founder of Hortimare, Job Schipper told us five years ago: ‘In seaweed cultivation, we just moved out of the stage of collecting, comparable to agriculture some ten thousand years ago. In short, we have only scratched the surface.’