You are here: Home / 2013 / October / Seaweed is becoming big business

Seaweed is on its way to become a serious hype, and a sustainable one. At the second international seaweed conference Seagriculture, in Den Helder and at the Wadden isle of Texel, the long red, green and brown strings even became hip. Films and presentations on the Dutch Weedburger and on organic food. People already call the North Sea ‘the new allotment’. There is bright future for a seaweed industry too, so we are told, but for the time being we just reflect some more on the ‘growing’ of weeds at sea. 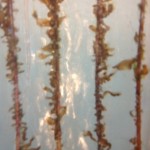 It is strange that we, inhabitants of European coasts, did not discover seaweed earlier. In Asia people have consumed it for ages, although a use at a large scale for industrial purposes or as a fodder has not made headway there as yet. But now the action has come to our shores. Even to such an extent that gradually, algae become a less obvious option. Seaweed (macro alga) has the advantage that it is withheld by filters. And yet the large scale production of weed at sea is not an easy job. Perhaps that is why production of seaweed has always remained a coastal activity so far.

In its infancy
Seaweed producers do not mince their words in pointing out their advantages: no ILUC, very fast growth and vast quantities of valuable substances like marine proteins (fish feed, food), mannitol, alginate, pigment and polysaccharides. Opportunities for food and chemical commodities, and in addition to that many other substances like fucoidan for medical applications. High up in the value pyramid. Seaweed draws a lot of attention, in particular as the European Parliament recently indicated that we should turn to waste oils and fats, and to seaweed for production of our biofuels. The first of these options we already practise, but the second one is still far away. And it may remain so, for North Sea seaweed hardly contains any lipids. And even if so, the value pyramid would advise negatively on this pathway. Growing seaweed is still in its infancy, about at the stage of agriculture 10 000 years ago, when we moved from hunting to regular agriculture with a constant product quality. Fortunately, now we have better technology at our disposal. 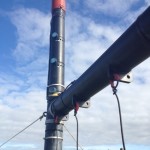 Cables for attaching seaweed that can move up and down with waves.

At the first conference, a year ago (in the Netherlands as well), the number of scientists attending did not surpass 50. And no entrepreneurs, there are very few of them in this branch anyway. There was Job Schipper of Hortimare, active at the North Sea farm to the West of Texel. At the second conference, there were at least three times as many attendees, and representatives of foreign universities and of industries. And many researchers, who all judged that there is still a lot of research to do. Always a sign that the sector is still in its infancy. There was a big customer Piet Bogaert, manager polysaccharides at Cargill (by far the largest user of seaweed, in particular for the production of alginate and carrageenan), who imports all of his seaweed from Asia, but who told everyone that he would love to use 100 000 tons of fresh, wet North Sea weed. For him, the Asian method to dump pig manure in the water as a fertiliser for seaweed is comparable to cutting down the rain forest for a soy plantation.

Eat weed, live longer
The number of people that made a plea for the use of seaweed for human food was remarkable, as Europe hardly has a history of eating seaweed; here, seaweed is mostly used in cosmetics and medical products like Kelp tablets. But hopes are high, exemplified by the talk of the North Sea as an allotment by Martin Scholten (Wageningen UR/MCN) at the conference opening, and by the introduction of the ‘Dutch Weedburger’ (by the way, most attendees did not pay attention to this wordplay). But Paul Bikker (Wageningen UR) wondered if seaweed would indeed make such good fodder; he pointed out that the minerals content in seaweed is quite high and wondered if it would be well digested. So maybe we should treat it cautiously for human food as well, and not indulge right away in consumption of the Weedburger, in spite of its slogan ‘eat weed, live longer’. By the way, I do not know in what quantities Japanese eat it. 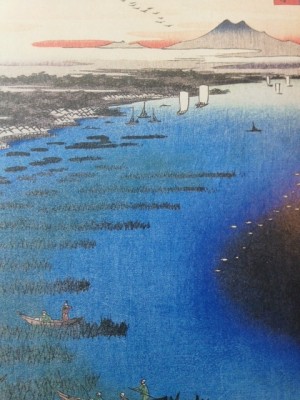 But to me, the man who exemplified Seagriculture was Stefan Kraan, a Dutch entrepreneur at Galway, Ireland. According to him, 100 000 tons of seaweed are washed ashore daily at the Irish coast; and he judges the Norwegians to be far ahead of the rest of Europe. His company Ocean Harvest Technology produces seaweed as a fodder for pigs, and in particular for farmed salmons that thrive on it and are kept free by it from illness (sea lice). He is a staunch believer in the future of seaweed, sees opportunities and invests in it. As one of the few. Together with a Chinese chemical company, he is involved in a major project in Norway for the commercial production of seaweed. And he sees opportunities in the cosmetic and biomedical fields, although the patents for such products are not in the hands of Europeans but of Americans.

25 million tons of biomass
The majority of seaweed is water, up to 90%. Therefore, pre-treatment at sea appears to be important. Seaweed hardly contains lipids, and therefore, if we would like to produce biofuels from them – as the European Parliament would prefer – we could make better use of algae. But production of chemicals from seaweed is quite another story, as ECN’s Jaap van Hal explained. He sees opportunities to use 10% of the North Sea area for seaweed production in combination with wind parks (although the wind electricity producers are not very fond of that combination). That could produce as much as 25 million tons (dry weight) of biomass, a feedstock for products like mannitol, to be processed to isomannitol. Which is an isomer of isosorbide, a substance from which we can produce fuel additives, plasticisers for polymers, and polymers like PRT, epoxy resins and PUR. Other weeds can produce xylose, butanol or acetone; and seaweeds can be deployed for phosphate recycling. In the North Sea, phosphate concentrations are high, as these nutrients are supplied in large quantities by the river Rhine.

Summing up, there are not many certainties, and most ideas presented had an appreciable amount of wishful thinking. But there was excitement in the air at Seagriculture: things may start happening now. This is also shown by the number of international conferences and the opportunities for use of seaweed lain out there. There is a lot of attention. Seaweed is hot, and everyone now still has the impression that the sky is the limit. But major opportunities imply major difficulties. Just ask Job Schipper for them. High waves stand in the way of weed farming in the middle of the North Sea. Norwegian fjords might be more suitable to that. Anyway, hopes are high. The same sentiment as a few years ago in the biobased economy, as that took off.