Every year the European car industry uses around 80,000 tonnes of wood and plant fibres to reinforce composites, instead of synthetic fibres like glass and carbon fibre. Biocomposites have become increasingly popular with car manufacturers because they can reduce vehicle weight, which improves performance and lowers CO2 emissions. They are used in car interiors for components like door and floor panels, but they also have more structural applications. 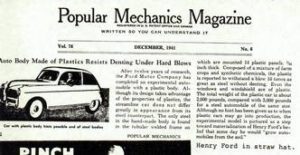 In 1941 Henry Ford unveiled a prototype, plastic-bodied ‘Soybean Car’ that weighed around a third less than an equivalent steel-bodied vehicle. Its body panels were said to be made from a soy-based bioplastic reinforced with natural fibres. Today no one is quite sure of their exact make-up of this biocomposite, but it is thought to have contained – among many other ingredients – soybeans, wheat, hemp, flax and ramie. The founder of the Ford Motor Company thought that the plastic panels were safer than steel and hoped that this new material might replace the metals used in cars. But World War II put an end to his plans. When the US entered the war, at the end of 1941, all automobile production was suspended. Unfortunately, this resulted in the Soybean Car project being abandoned, and apparently the prototype was later destroyed by Ford designer Lowell E. Overly.

More recently, the American car manufacturer used Kenaf fibres in the door trim of the first generation Mondeo, which rolled of the production lines in 1993. And now, the door trim in all Ford cars is made from a mix of at least 50% natural fibres and plastic. The company is keen to use sustainable, environmentally friendly matter, but weight is a key part of that, says Maira Magnani, an engineer at the vehicle manufacturer’s Research and Innovation Center in Aachen, Germany. She explains that any bio-based car parts won’t be considered unless they weigh the same as or are lighter than what they are replacing. ‘For cars’ 80 per cent of the environmental footprint is created in the use phase and that links us immediately to weight.’ 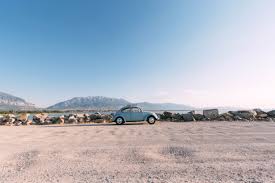 Magnani says that current Ford cars contain on average 9-18 kilogrammes of bio-based or renewable materials. Most of them are fibre-reinforced plastics, but there are other applications. For example, the fuel lines in most models are made from a castor oil-based plastic. Car interiors are where most car manufacturers use biocomposites, according to Mike Clowry, vice president Advanced development & engineering at the International Automotive Components Group (IAC). ‘We have produced map boxes, trunk trim, rear seat liners and door components employing natural fibre composites,’ Clowry says. ‘In 2017 IAC launched ‘the first natural fibre composite sun roof frame’, which is made from 70% hemp and kenaf fibre and weighs 50% less than a metal sunroof frame. It is now used on all Mercedes-Benz E-Class and A-Class cars.

Hom Dhakal, a researcher in composite materials at the University of Portsmouth in the UK, believes that the next step is semi-structural applications, ‘such as front and rear bumpers made from flax fibre composites’. He says that his team are close to producing a flax fibre material that will meet the mechanical requirements most vehicle manufacturers specify for engine covers. There are things that they could do right now, like adding glass fibres to the mix, to reach those standards, but they would reduce the material’s sustainability and make it harder to recycle, he explains. This is the main stumbling block for structural biocomposites: making them truly more sustainable than the alternatives. To achieve this, Dhakal says, you need to look at manufacturing. ‘If you have an efficient process you use less energy and you use less material,’ he explains. This saves time and money, and improves sustainability. Once the manufacturing techniques are better established, Dhakal believes wide-spread use of semi-structural biocomposites will come quite quick. He also thinks that European Union regulation to reduce air pollutant emissions has been a driving factor for the car industry to use lighter materials, such as natural-fibre-reinforced composites. By 2021, new cars will need to have CO2 emissions 40 per cent lower than 2007 averages. Beyond this, the EU is considering enforcing further cuts in emissions by 2030.

Natural fibres are also less energy intensive to produce than synthetic fibres. According to an analysis by nova-Institute, based in Germany, the production of one tonne of glass fibres produces 1.7–2.2 tonnes CO2 equivalent, while four natural fibres – flax, hemp, jute and kenaf – have an impact of 0.5–0.7 tonnes CO2-equivalent per tonne of fibre produced. A study in India, reported similar figures for these fibres, and concluded that the carbon footprint for the production of natural fibres is 20-50% less than glass fibres. But these figures only get the fibres to the factory doors – they don’t cover the impact of producing or using the composites.

In 2004, a widely cited review looked at studies comparing the life cycle costs of natural and glass fibre composites. It concluded that natural fibre materials are likely to be environmentally superior to glass fibres in most applications. In addition to using less energy during fibre production, natural fibres are lighter, and biocomposites use less polluting polymers than glass fibre composites, according to the review authors. They confirm that the lighter weight is particularly important when natural fibre components are used in cars, as it improves fuel efficiency and reduces vehicle emissions.

This article was originally published on the site of allthings.bio.