Cellulosic ethanol costs vary greatly among the six units now in operation across the world, according to Lux Research. The single most important factor contributing to the cost differences is feedstock costs. Sugar cane straw costs are half those of corn stover. Price differences indicate that innovation is needed in several relevant areas, says Lux.

Lux Research, a Boston-based technology consultancy firm, recently published a report ‘Uncovering the Cost of Cellulosic Ethanol Production’. Lux built a comprehensive cost model based on six cellulosic feedstocks and three pre-treatment technologies. They calculated cellulosic ethanol production costs from six units, now operative: GranBio and Raizen (Brazil), BetaRenewables (Italy), and Abengoa, DuPont and POET/DSM (US). Projected prices range from $ 2.17 per gallon (€ 0.52 per litre) (Raizen) to $ 4.55 per gallon (€ 1.09 per litre) (Abengoa). Cellulosic ethanol is a biofuel produced from wood, grass and inedible parts of plants. Production of this biofuel does not compete with the production of food crops such as maize and cane sugars. Therefore it has received much policy support from governments at both sides of the ocean. The six units use widely different feedstocks: sugar cane straw and bagasse (Brazil), wheat straw (Italy) and corn stover (US). Feedstock costs appear to be the single most important factor determining production costs. ‘Improving feedstock aggregation and lowering feedstock cost is critical in cellulosic ethanol achieving cost parity, as feedstock cost can impact total cost by 40%,’ says Yuan-Sheng Yu, Lux Research analyst and lead author of the report. 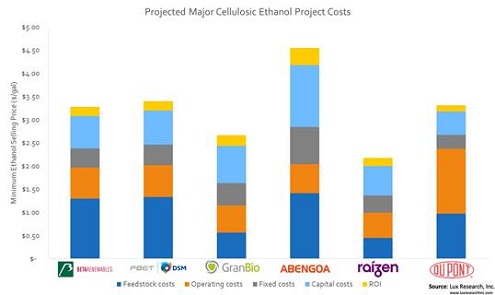 I asked Victor Oh, an analyst at Lux’s Alternative Fuels team, if these differences in feedstock costs reflected in any way differences in wages in the respective countries. Or alternatively, would certain resources be intrinsically cheaper than others? And if so, would the US and the EU be faced with a permanent disadvantage? ‘That is an interesting perspective,’ he replied by email. ‘Feedstock prices do reflect wage levels in some cases, however, the strength of the correlation is certainly dependent on the feedstock material. For example, feedstocks such as corn stover and wheat straw require aggregation and transport which add significant costs. This is in contrast to feedstocks like sugarcane bagasse and wood that are typically aggregated to a central mill or location, eliminating associated costs. (But) DuPont found through its joint study with Iowa State University that it was able to reduce its feedstock cost for corn stover by nearly 50% by implementing its Corn Stover Harvest Program. This aims to optimize stover collection by using agronomic data to reduce the collection radius, increasing bale density and overall bale quality, and lean manufacturing through reduced in-field machinery.’

Other areas require innovation as well, says Lux Research. They estimate that improvements in pre-treatment yield, enzyme performance and price, and fermentation efficiency potentially reduce costs by up to 16%. In the longer term, price reductions are important. Victor Oh: ‘In the US and EU, demand for cellulosic ethanol is driven by volume mandates. Currently, the shift in regulations towards non-food derived biofuels is a major incentive for cellulosic ethanol producers. (However), economics will be a barrier for future development if producers cannot demonstrate lower costs and price competitiveness now.’

With cellulosic ethanol, bigger is not always better

Interestingly, Lux researchers found that bigger is not always better. Abengoa’s facility in Hugoton (Kansas) cost $ 500 million but despite getting economic credits for a 21 MW on-site generation unit, it is projected to have the highest selling price for ethanol. The DuPont facility is even somewhat bigger but investment costs were half of Abengoa’s. In agribusiness, bigger units entail more transport costs, which causes a natural limit to economics of scale – unless one devises smart ways to compact the yield, as DuPont did. Lux’s report shows above all that the field of the production of second generation ethanol is in full development, and that it still needs quite some process innovation in order to attain maturity.

- Faulty connections: there could be problems with the wiring. A faulty or loose connection could result in low power output. You can troubleshoot your wiring system by checking them at various points using a multimeter. #solarisgreentechhub #sustainability #renewableenergy

𝐒𝐮𝐬𝐭𝐚𝐢𝐧𝐚𝐛𝐥𝐞 𝐫𝐨𝐚𝐝𝐬 🛣️ As #floods and #droughts increase in frequency, the #IADB wants to seize the opportunity to close the #infrastructuregap, investing in #sustainable #roadways. #tidings #deheza #closingthegap #infrastructure deheza.co.uk/sustainable-ro… via @deheza

Another creative December day in Room 9. Plenty more to come before the holiday arrives, but here's a peek at our Christmas Corner so far... #sustainability #recycle pic.twitter.com/nRc5J4BtAq

My latest @IndustryWeek column, on how #IoT Devices Are Changing the Global Emissions Game (a win-win for bottom line AND environment!) #globalwarming #sustainability industryweek.com/technology-a…

Did you know that, in addition to improving your software’s resilience and #flexibility, #microservices can also support your #sustainability goals? Learn more about this in this Forbes article by our CTO, Claus Jepsen. bit.ly/3WIl3bM #Unit4 #ERP #BusinessSoftware