Transnatural Design, located in an Amsterdam basement, is an organisation that ‘offers smart design and breath-taking art in which nature & technology come together in unison…. Transnatural explores ways how to (re-)design our living spaces so that humans, nature and technology can expand, enrich and feed each other.’ 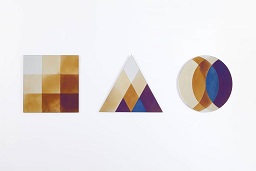 Transnatural is an organisation that brings together artists, says Arjen Bangma, the driving force behind the organisation. Transnatural organises exhibitions in many locations, of which MoMA was the most prestigious so far. The organisation manifested itself for the first time in 2010 at the Transnatural Festival in Trouw in Amsterdam; there, Julius Popp demonstrated a water printer that spewed water, forming a readable text for just a fraction of a second, very transitory art. A more recent successful design is by Lex Pott and David Derksen. They produce mirrors in which the natural blackening process (the result of a reaction of silver with hydrogen sulphide in the atmosphere) has been speeded up and subsequently arrested. The colour tones range from gold to brown, purple and blue. 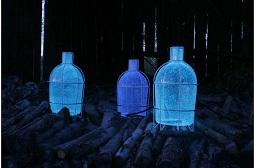 Many designers under the umbrella of Transnatural

Gionata Gatto and Mike Thompson make use of a very different natural process: photoluminescence. This is the phenomenon that some pigments absorb energy from the environment, and subsequently radiate this in the form of light. The designers enclose these pigments in glass bottles; lighting a lamp within the bottle for half an hour will enable the pigments in the bottle to ‘recycle’ this light for a few hours. The ‘Trap light’ becomes both shade and light source, emitting, absorbing, and re-emitting light.

Marjan van Aubel and James Shaw produce stools from wood waste. Understanding that there is 50% to 80% of timber wastage during manufacture, they incorporated this waste in a new material. They mix the shavings with a bioresin; these substances react to form a sort of foam, that they form into stools in a template and harden. At the top, the material is smooth, allowing us to sit on them; the bottom, where the material is slapped by hand, ends up in an irregular, foamy structure into which legs are stuck, allowing the structure to be used as a stool. The designers add dyes which allow them to produce stools of a firm composite material in many forms and colours.

Jólan van der Wiel produces stools in quite different organic forms. He forms a paste of polyethylene and iron, and rises it with a special magnet machine. This results in the production of three-legged stools, unmistakably from iron, in special forms.

Transnatral Design has created a commercial branch, Transnatural Label, that sells these objects. The organisation funds new projects from these proceeds. As Arjen Bangma puts it: ‘We balance nature and technology. Not everything we do is sustainable, but that still is our aim.’