You are here: Home / 2015 / October / Ecomodernism, a great idea and a big disappointment

Ecomodernism! It could be a breakthrough in the stalemate between proponents of economic growth and those of radical reforms, e.g. to prevent climate disasters. The term combines elements of both sides. So with great expectations, I started reading ‘An Ecomodernist Manifesto’, dated April 2015 but launched only recently in the UK. But what a disappointment. In the end, the authors just defend old-fashioned modernism, ‘progress’, as if we had not lived through postmodernism already. 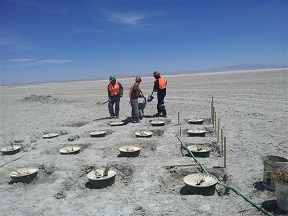 One of the small-scale and benign technologies that serve green growth is Groasis’ Waterboxx. This allows successful replantation of even very arid areas. Picture: Waterboxx trials in Antofagasta, Northern Chile. The containers are biodegradable.

Ecomodernism: technology and sustainability are in tune

The initial idea of ecomodernism is great: the authors demand that ‘humans use their growing social, economic, and technical powers to make life better for people, stabilise the climate, and protect the natural world’ (p.6). This tunes in with the observation in our book Green Growth, that at present, technological innovation is on the path of sustainability; and that many companies in the developed world look upon sustainable technology as the vehicle for their future economic development. The very observation that sustainability and technological development are on the same track, is a sharp departure from their opposition in the seventies; back then, leading ecologists were hostile towards technology, and leading technologists looked upon the environmental problem as ephemeral.

So, the idea is great, but then we read that ‘plentiful access to modern energy is an essential prerequisite for human development and for decoupling development from nature’ (p.19). And we even come across support for ‘unlimited energy (p.10). I had not thought ever to come across this concept again. I pray that the good Lord will protect us from it. Unlimited energy would mean that we could perform all the mischief that we ever dreamt of, without suffering the consequences (for we could clean up the damage at no cost). Our main task as mankind with regard to energy is to use it in a responsible way, i.e. as efficiently as possible. The idea, let alone the ideal of unlimited energy is squarely at odds with a sustainable economy. Knowing this, we are no longer surprised that the authors aim for ‘energy technologies that are power dense and capable of scaling to many tens of terawatts to power a growing human economy’ (p.22). That is to say: nuclear fission, nuclear fusion, and just to a very limited extent sustainable energy sources. The authors tell us: rely on technology; but they seem never to have come across the multitude of benign and small-scale technologies, like in green chemistry that have turned us into technological optimists, because these provide cost-effective and sustainable solutions for many problems, both big and small. 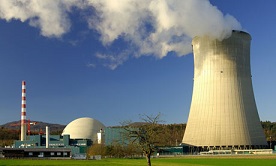 Would we have to rely on nuclear power to supply the world with unlimited energy?

The fight against the self-created enemy

If we then re-read the introduction, we see the authors affirm ‘that humanity must shrink its impacts on the environment to make more room for nature’; this is the concept of intensification of production – a good leading principle, as this means higher resource productivity. Higher productivity in an (eco-friendly) agriculture, for instance, means more land for nature. But in the same breath they reject the idea ‘that human societies must harmonise with nature to avoid economic and ecological collapse’ (p.6). Here, the authors create an artificial divide. They suggest that environmentalists propose to rely on ancient technologies to harmonise with nature; and then hold that ‘any large-scale attempt at recoupling human societies to nature using these (i.e. ancient) technologies would result in an unmitigated ecological and human disaster’ (p.16). But has anyone ever come across an environmentalist who proposes that we should revert to ancient technologies? The authors may think of biological agriculture. But there is so much more in the land of ancient technologies. Would environmentalists also want to revert to candle light? Or oxcarts? It is easy for the authors to fight a self-created enemy!

Ecomodernism, proposed in this way, is self-defeating. The correct insight that technology is no longer at odds with ecology is immediately ridiculed by the authors’ pick of technologies: nuclear power as the most ‘modern’ technology; in their entire manifesto, no other technologies are mentioned, even though they tell us to rely on technology. Yes, they support urbanisation as another form of intensification. But they forget to specify what kind of agriculture would be needed to feed these megacities. Precision agriculture could do it at minimal ecological damage, but they seem never to have heard of it. To this unconditional urbanisation, we contrast the concept of the biobased economy as an ‘ecologically responsible’ economic system. An economy that could revive rural areas, because it could host biobased and small-scale benign industries, a real source of green growth, but the opposite of the authors’ utopia.

No wonder, this ecomodernism encountered criticism. In The Guardian, George Monbiot criticised the authors’ idea that large-scale agriculture would be more efficient than small-scale. The authors were disappointed, having thought that Monbiot as a proponent of ‘rewilding’ natural areas would have embraced their concept of intensification. But their concept of virtually farmer-free agriculture (I exaggerate) is unconvincing. All problems boil down to their old-fashioned concept of modernism, as if we had not lived through postmodernism already. This they expand in chapter 6. They envisage one straight technological development path upwards, and a corresponding economic path, leading to ‘vastly improved material well-being… and personal freedom’ (p 28). In fact, they defend old-fashioned progress. This also explains why they do not bother to distinguish between technologies. In progress, there is just one development path, or else primitivism. Their assertion, in one catchphrase, is: progress will heal all wounds.

This misconstrued idea of ecomodernism gives a wrong idea of what technology could mean for sustainability; it does not touch the heart of the matter, and it invokes criticism that does not touch it either. The basic conceptual mistake of the authors seems to be that they confuse intensification (more efficient use of natural resources) with spatial concentration, and this again with large-scale technologies. Whereas small-scale technologies can be quite as effective and ‘intense’, and much more benign. No much good can come from this one-sided manifesto.