You are here: Home / 2015 / June / Are polyolefins really cheaper than sustainable alternatives?

The enormous utility of polyethylene, polypropylene, polystyrene, polyvinyl chloride, and other polyolefins cannot be disputed, but their real cost is debatable.

My teenage daughter makes cookies in our kitchen. The ingredients — flour, sugar, chocolate chips, etc. — are always available through no effort of her own. The oven reliably warms up via a process she probably does not understand and certainly does not pay for. When she is finished, she has two dozen cookies and I have a kitchen and dishes to clean. She once declared that her cookies are ‘free’. While delicious, these cookies are not free. Her evaluation ignored the origin and value of the feedstocks, ignored the actual cost of production, and ignored the real effort and cost associated with returning the kitchen and dishes to a state usable by the next cook. To my daughter, her minimal efforts are well worth the chocolaty benefits. The outcome is great for her, but arrives with naïveté and inconsideration. 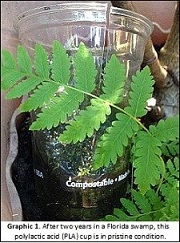 When I hear recitations about the low cost of polyolefins, I simply think of my daughter’s cookies — not actually eating them, just my expense of providing the ingredients and my servile cleaning efforts. Polyolefins, each approximately one U.S. dollar per pound, seem inexpensive — so long as one ignores the true value of their feedstocks, their full production costs, and their environmental remediation. Including these costs — such as sifting through tons of municipal trash, manually collecting polyethylene bags five grams at a time, or filtering the world’s oceans—massively inflates the real cost, probably by an order of magnitude or more. Hence, the time-integrated or full lifecycle cost of truly sustainable polymers should be significantly less than that of polyolefins — especially when they undergo self-remediation in natural environments to benign products in a decade or so.

Ever growing worldwide efforts have targeted polyolefin replacements that are ‘sustainable‘, a term that should be reserved for polymers that are both renewable and degradable. Examples of polymers that are renewable, but not readily degradable include bio-polyethylene (bio-PE, from Brazilian sugarcane), polyethylene furanoate (‘PEF is not biodegradable’), bio-nylon 11, and 30% renewable PlantBottle® polyethylene terephthalate.  Even natural rubber and polylactic acid (PLA) can be slow to degrade in natural environments. Note the testimony of Graphic 1, which pictures a surprisingly pristine PLA cup that has inhabited a Florida swamp for two years. Examples of polymers that are degradable, but not generally renewable include polyglycolic acid (PGA),  polycaprolactone (PCL), polybutylene succinate (PBS), polyvinyl alcohol (PVOH), and most polyanhydrides. These polymers degrade with some facility in the environment, but are constructed primarily from fossil fuels. 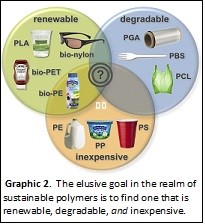 Graphic 2 depicts a Venn diagram including the aforementioned classes of polymers, renewable and degradable. Also depicted is a circle encompassing classical, fossil fuel-based, inexpensive commodity polymers, such as polyethylene (PE), polypropylene (PP), and polystyrene (PS). At the centre of the Venn diagram is the ultimate goal of the green polymer renaissance: a polymer that is built with renewable feedstocks, degrades in the environment into safe by-products, and is cost competitive with extant polymers that have enjoyed decades of industrial optimization. This ideal polymer probably does not exist yet, but many believe that continued research and innovation, along with economies of scale, will eventually yield this panacea plastic. Hopefully this occurs soon. In the interim, I will concede that polyolefins are cheaper than sustainable alternatives — so long as you clean my kitchen.

First published by ACSGCI in Green Chemistry: The Nexus Blog
Stephen A. Miller is an Associate Professor of Chemistry, University of Florida, and Chief Technology Officer, U.S. Bioplastics