‘Hemp is a very versatile crop,’ says René Sauveur of Pantanova, a Dutch consultancy company in the area of growing and processing hemp. But the market is difficult and needs to be conquered. No, our subject is not the hemp variety that yields THC, the well-known marihuana; it concerns industrial hemp, that has its versatile fibre as its main product, and also produces promising oils and proteins. And cannabinoids, substances with interesting medical applications. 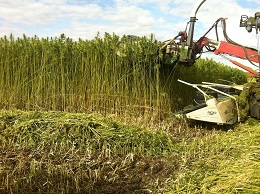 Industrial hemp continues to face a credibility barrier. You won’t turn high on it? No, it’s THC content is too low for that. But the plant will yield fibres for construction materials, paper, textiles and composite materials. And the plant is a very good resource for production of fodder for dairy cows (no, they do not turn high on it).
In fact, hemp is a very old crop, much used for rope in previous centuries but substituted by sisal in that application. Modern hemp varieties yield products for many markets. It is a versatile crop, a crop for the future. Although that very versatility is an obstacle in the short term because the yield needs to be sold in many markets at the same time.

A fine quality of hemp is that the crop needs very few inputs. It does not need any pesticides and little water, also in its processing – a quality that hemp shares with other fibrous crops like flax, but hemp even outperforms these. Therefore, hemp has a very low footprint, according to a recent study by German nova-Institute. Moreover, hemp is very good for soil quality improvement, a major advantage in Western Europe where the carbon content of the soil decreases continually.
‘All in all,’ says René Sauveur, ‘hemp is very well suited to become the fourth crop in the crop rotation scheme.’ He works hard himself to improve the business case. Farmers’ organisations have much interest, and in Gelderland province, René works on a large-scale experiment. In 2015, in Europe as a whole, the hemp acreage sown in amounted to about 22,000 ha, 20% more than in 2014, in particular in Poland. René sees many opportunities for further growth in his home country to 5,000 ha in 2018, doubling that area in later years. 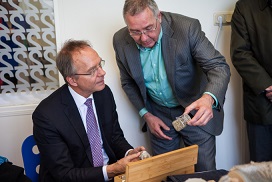 Dutch minister of Economic Affairs Henk Kamp (l) and René Sauveur at the signing of the Green Deal Natural Fibres.

Many applications for hemp

Public interest for hemp is on the rise in recent years. A record number of 260 attendants from 38 countries visited the last meeting of the European Industrial Hemp Association (EIHA) last month in Germany. The number of applications is on the rise also. Before the rediscovery in the nineties of the last century, the crop was mainly used for the production of specialty paper. Still half of the yield is used for that purpose, but other applications are on the rise. Like insulation material (a quarter of the production), and mats used as a cover in horticulture, as a substrate for cresses, and as a bedding for farrowing pigs. And then there is the growing market of biocomposites, mainly used in the automotive industry for inside panels. According to EIHA, hemp is the fibre used in 96 percent of all biocomposites.

The inside of the stem produces the so-called shives, a product that is very suitable as a bedding for dairy cattle and horses. And as the filling of chalk hemp stones and as an insulating board. And moreover, there are food products and nutraceuticals derived from industrial hemp, like hemp oil (that has an excellent balance of omega-3 and -6 fatty acids). Or CBD (cannabidiol), a cannabinoid that raises high expectations with some, also in medical applications. But we will reserve that issue to a later article.

‘If we can sell all products from the crop, a sound business case should be feasible,’ says René Sauveur. This implies both raising interest from farmers and their organisations, and market development: in the markets of fodder (for cows and other dairy cattle), textiles, construction materials and composites. In order to achieve these goals, René and others concluded a Green Deal Natural Fibres with the Dutch government. The participants, some 25 companies, knowledge institutions and governmental bodies, declare that they will exert themselves to prove the cost-effectiveness of new natural fibre production chains. ‘I daresay that on the level of national and provincial governmental bodies, hemp has become accepted now. It’s now up to us to conquer the rest of the country,’ says René.
The use of hemp products carries a lot of promise, but according to him hemp growers would be wise to pick the low-hanging fruit first in the four aforementioned markets, before venturing into the food market successfully. According to him, there is a lot of unused knowledge on hemp in agricultural institutes like Wageningen UR. Knowledge that was developed on a subsidy-driven basis, but then remained on the shelf. René has been defending the cause of hemp for almost 20 years. ‘I really believe that breakthrough is around the corner.’