The twelfth Dutch Biobased Economy network gathering in Amsterdam, yesterday, radiated optimism. Not in the least because of the positive messages from those two award-winning flagships of the biobased economy in Amsterdam, Avantium and Photanol.

Cyanobacteria at work at Photanol.

For Photanol, the sky is the limit

Communication from Photanol changes rapidly in nature. In our first article on this company, two years ago, we highlighted the unique quality of the scientific discoveries and the wonderful products that could ensue from these processes. Now, in the speech by interim CEO Peter van Gelderen, the primary issue was money and the question how quickly they would be able to construct a commercial plant. Two years ago, just the two founders Klaas Hellingwerf and Joost Texeira de Mattos were involved; now the company employs fifteen staff and a board of four.

Photanol claims it has solid patents for the production of a very broad spectrum of chemicals, from feedstock that merely consists of CO2, water and sunlight. The company’s work horses are modified cyanobacteria. The reaction pathway in these organisms begins with steps in photosynthesis, but it branches halfway towards other products than sugars. Photanol now has one pilot plant and will have a second one soon. Next year they will build a demo plant as large as a football field (not expensive for a demo: € 1.5 to 2 million) and then all is set for the step towards commercialisation. This year the company will earn revenues from the sales of specialties already, bulk products will come later. On the input side, the company negotiates with companies emitting much CO2, like Tata Steel in IJmuiden. Such a cooperation would work both ways: Tata will have to pay for emitting too much CO2, for Photanol this CO2 would be a cheap feedstock. Last year, Photanol made a strategic alliance with AkzoNobel, and as a supplier of excellent technological knowledge it will look for cooperation with many other major companies. Moreover, the productivity of Photanol’s processes is much higher than that of photosynthesis – and its plants can be constructed at sea or on infertile land; from which we tend to conclude that for the time being, the sky is the limit for Photanol. 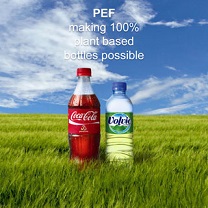 Avantium puts Europe back on the map

Avantium too was present as a company from Amsterdam. Yes, it is still based in Amsterdam, although it is courted by many cities and countries. The backbone of the company is the development of industrial catalysts concentrating on furans, but then the company also developed the wonderful product PEF, the substitute for PET but with an improved quality. Avantium develops this product exactly the other way round, compared to Photanol: directly into the mass market, beverage bottles. ‘It costs a lot of money to construct a demo,’ says CTO Gert-Jan Gruter, ‘and we try to get a return on that as quickly as possible.’ And therefore, the company partners with the largest beverage producers in the world, Coca-Cola and Danone. The company’s pilot now runs in Geleen, the Netherlands, for three years, and for years the company investigates the best location for its demo. On that subject, Gert-Jan Gruter had something to say in Amsterdam. ‘Two years ago, it was almost certain that we would construct the demo in the US, now it is almost certain that it will be built in Europe.’ Avantium would like to decide before the end of this year. Good to hear that Europe is on the map again!