Whereas world capacity for biobased chemicals and materials is rapidly growing, Europe clearly lags behind. Lux Research, a Boston based company, expects a doubling of global biobased capacity in 2017 to 13.2 Mton. But Europe’s share will drop from 37% in 2005 to 14% in 2017. 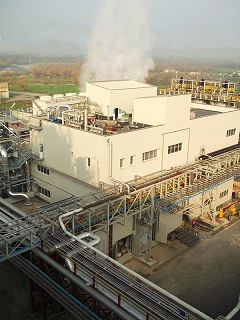 Reverdia succinic acid plant located at Cassano Spinola in Italy is one of the European frontrunners in the production of biobased chemicals. Reverdia is a joint venture of DSM and Roquette Frères, the plant was launched in December 2012.

And the winner in biobased chemicals is…

The United States is the winner. North America now ranks fourth in global capacity, Lux analysts write, but will become the leader by 2017 as American start-ups like Gevo build plants closer to home. In the broader picture, Lux reported last month that biobased chemicals and materials technologies have reached an inflection point with companies scaling to commercial production levels and growing revenues. The leading growth category will be intermediate biobased chemicals like adipic acid and lactic acid, with capacity growing from 2.0 million metric tons (MT) to 4.9 million MT in 2017. The capacity of bio-derived polymers – currently at 1.1 million MT – will grow 18% per year through 2017.

‘The basic science of biobased chemicals and materials has advanced to the point that dozens of chemicals can now be produced from multiple feedstocks, at costs that are competitive with petroleum, at least in theory and at scale,’ said Julia Allen, Lux Research Analyst and the lead author of the report. ‘As a result, biobased chemicals and materials manufacturers continue to expand and diversify into new feedstock types, product types, and geographical areas.’

Lux Research analysts found particularly good prospects for specialty chemicals. They mention farnesene, commonly found in the scent of green apples and gardenia. They expect the production capacity for this product to quadruple between now and 2017.  But cellulosic feedstock for biobased chemicals will struggle. First-generation sugar/starch feedstock – such as maize and sugarcane – will remain the dominant biobased source. First generation sugars from very diverse sources will come to the market in such quantities, that Lux analysts recommend biobased chemicals industries to take a portfolio approach to their feedstock base. Cellulosic feedstock will grow relatively slowly, and the rise of new sources like bio-oils and waste gas will contribute to lowering cellulosics’ share from 67% to 27%. According to Lux Research. In spite of the major R&D efforts for developing cellulosic chemicals, both in Europe and in the US.

The lack of European investments in the fast growing market of biobased chemicals is worrying. We reported earlier on the frustration of major producers about the relatively disadvantageous European investment opportunities, whereas Europe clearly makes an effort to support them in their. So far, many major European industries invest abroad because market conditions are better in countries like the US and Thailand. The start last year of the Bio-based Industries Initiative, a ppp between the European Commission and the Bio-based Industries Consortium (BIC), steps up Europe’s efforts to regain lost ground. But Europe will have to monitor closely the results of this initiative in the booming market of biobased chemicals, and if necessary step up its efforts once more.

Cultivating Capacity for Bio-based Materials and Chemicals through 2017.
biconsortium.eu/