You are here: Home / 2014 / March / Toxic substances in food packaging – an opportunity for bioplastics?

Toxic substances in food packaging – an opportunity for bioplastics?

Our industrial society exposes us to low doses of toxic substances. These are known to have health effects – but to what extent? For some time, air pollution and lung degradation have been a focus of debate; now researchers started to attack toxic components of food packaging. Do these migrate to our food? Concerns about this could possibly be a strong argument for the use of bioplastics. 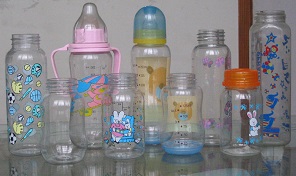 Concerns about traces of bisphenol-A in polycarbonate baby bottles caused an upheaval in the US.

One class of substances effects hormone activity. Such a compound is bisphenol-A, a feedstock for many kinds of polycarbonates and still present in small quantities in this product. In the US, publicity about this caused an upheaval, as many baby milk bottles are produced from polycarbonate. This caused an increase in sales of bioplastic PLA. Health effects in later life may occur because of exposition of babies, and even foetuses. The incidence of modern health problems like cancer, obesity, diabetes, and neurological disorder, may or may not be caused by low doses of toxic substances, from food packaging or otherwise.

According to some authors, another danger might be caused by traces of formaldehyde in PET-bottles. Almost everybody now consumes soft drinks from PET-bottles. Formaldehyde is a carcinogenic compound. To what extent does this substance migrate from the food packaging into the soft drink, and do these low concentrations have any health effect? The answer to both questions is unknown. Traces of formaldehyde are also found in melamine plastic cutlery. Same questions, same answers. Would not the use of a bioplastic without such toxic traces be a good precautionary measure? 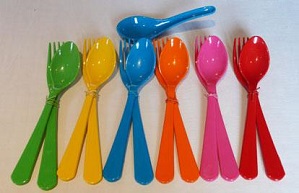 The Food Packaging Forum now has rung the bell for another round of discussions. This Forum is a Zurich based foundation with the mission to make ‘scientific facts and expert opinions about food packaging health accessible and understandable to all.’ Researchers of this Forum wrote an article in the Journal of Epidemiology and Community Health (part of the British Medical Journal group); they ask for more scientific attention to these issues. They point out that there is very little knowledge about the amount of toxic substances to which humans are exposed from food packaging; that many small amounts may add up to important effects; and that we might quickly gain better understanding, using modern scientific methods and more detailed questionnaires.

We called Christiaan Bolck, asking him if bioplastics might be a good alternative to fossil-based plastics with possible toxic traces. Christiaan is program manager ‘biobased materials’ at Wageningen UR. ‘Bioplastics may very well be a good alternative in food packaging,’ he asserts. ‘Migration of toxic substances to humans is a theme that keeps popping up over the years. In the nineties for instance, there was an upheaval over phthalates in baby toys. Later the issue subsided. I am glad that it now reappears, and it does offer opportunities to bioplastics.’ 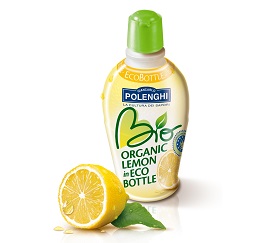 PLA bottles do not contain traces of toxic monomers, as its constituting agent lactic acid is a naturally occurring compound.

‘The issue is about several classes of substances. Traces of chemicals used in producing the plastic may be toxic. From time to time, isocyanates in PUR foam make headlines. The next candidate might be styrene, traces of which are found in polystyrene resins. Additives might be problematic as well, for instance stabilising agents. Lead compounds used to be added as stabilising agents, now these have disappeared because they have been legally banned. Plasticisers such as phthalates, another weak point of existing plastics. There are good alternatives to such plasticisers. Those on the basis of isosorbide, a biobased product, are non-toxic. If bioplastic producers are aware of these problems, their products will not be suspected of causing health issues. And that might be a major opportunity. Because plastics that still release toxic substances can become in the centre of public debate at a short notice. Although we have to be careful to judge pressure from public opinion. If substances are debated, that does not automatically mean that they are toxic.’

‘Authorities are not the only agents that take action against toxic substances. Sometimes industry does the same. For instance, automobile manufacturers took a stand against isocyanates from PUR. But often, legislation is slow. Although REACH, the new European system of chemical compounds registration, is a step forward in my opinion. If a new compound is not harmless in all respects, the producer needs to comply to a lot of testing in order to get his product admitted. But REACH still has to come on stream.’

‘Toxic substances from food packaging cannot be ‘hot’ permanently. But the issue often returns. I would not be surprised to hear more about this in the future. With the opportunities this night carry for bioplastics.’ Says Christiaan Bolck.