You are here: Home / 2013 / June / Design promotes the biobased economy

How does one draw public attention to the new, green economy? And the industry’s attention? The answer: call in the creative people, the industrial designers, the architects, the game and the fashion designers. In short, the people with creative ideas. They are keen to make new designs in view of the new sustainable materials, but often they do not know their properties and sometimes they do not even know that they exist. Enter the biobased world of design with its wide array of new green opportunities. 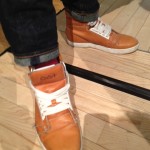 The solution? Let the two worlds meet, and that is what the Ministry of Economic Affairs did recently. That resulted in a splashing afternoon with an abundance of examples and interesting developments. Take for instance Christiaan Maats, a Delft based industrial designer and founder and owner of OAT Shoes who worked for years to develop a 100% biodegradable shoe. When it is worn out, the owner can bury it and it will decay completely (ahem, not yet entirely but we will arrive there shortly). The finishing touch is that he included seeds in his shoes, which will grow to blossom after use. People were enthusiastic about his design, but now he runs into import restrictions precisely because of these seeds. Red tape everywhere, but in the end his efforts are rewarded, as Puma and Adidas have shown an interest; and recently he got a call from a producer of synthetic leather who would like to produce biodegradable baby shoes from his material. Is not that great?

René Roman Smeets and his flax fibre reinforced skate board

Better flax than glass
A good signal that the biobased economy is at the verge of making a breakthrough is that the use of natural fibres rapidly increases. For instance in fibre reinforced polymers, together with resins from linseed oil or soybean oil, and in their pure form as an insulation material in the construction industry. So we might ask, why has not flax attracted attention long ago as an insulating fibre? Flax fibres are one third lighter than glass, but their major advantage lies in processing the fibre, both in the production and in the decommissioning phase, when incinerated. The glass in the composite material will melt in the oven, and that poses many problems; flax will just burn to produce energy. So now we saw an entrepreneur producing anything – like road signs and an entire scooter hood – from natural fibres and matching biobased polymers. If the scooter would be electrically powered, it could even become an icon of the green society. The entrepreneur is called Willem Bottger, of NPSP composites. Among other items, he produced a flax fibre reinforced catamaran that participates in races, for many years already, and another of his products is biobased façade plating. He is, as he puts it, ‘in search of building contractors with a long term view’.

Prototyping
Don’t they all, companies that enter the market with new designs and new materials? For NPSP’s Nabasco, René Roman Smeets designed a ‘nature based skate board’ for long distances, an elongated board from natural fibre reinforced biobased polymers. ‘An absolute must have’, he calls his board. Of course, the natural fibre is flax. René had produced an endless array of prototypes, as had Christiaan Maats in search of his shoes. Willem Bottger remarked, with a view on designers: ‘Architects are our most important ambassadors’, and ‘Sustainable building should be beautiful, too’. 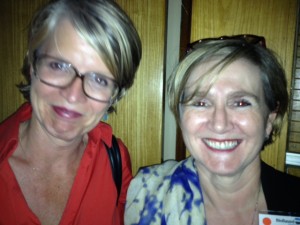 Crossovers
Leaders of the Topsector Creative Industry, prof. Valerie Frissen (chairperson of Click/Nl), and Annemieke Eggenkamp, inventor, translator and leader of the Dutch Creative Council, are very much interested in the crossovers between the world of design and that of materials supply companies. They are of the opinion that designers should play a larger role in the entire production process. From feedstock to product. In particular because design is the gateway to the introduction of new appliances and new materials. And, as both aforementioned designers indicated, the key to this is prototyping, prototyping and prototyping again, and the two ‘top cats’ of the creative sector could not agree more: one needs to be able to show it. In short, prototyping!

Such meetings between designers and industrial representatives in the biobased economy would seem very fruitful to me, perhaps even more so than meetings between researchers and biobased industrialists, as design actually shows a tactile result, and may transfer the idea ‘yes, it can be done’.