You are here: Home / 2013 / January / Shale gas and biobased, parallel and non-conflicting 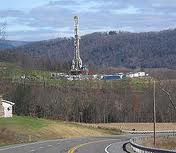 The use of major equipment is characteristic of shale gas exploration; at recovery, a low building remains in place.

If shale gas would have entered the US market five years earlier, this might have had very adverse consequences for the entire biobased economy (BBE). It might even have been killed at infancy, and the economy might have developed differently. As events have evolved, shale gas is quite important now, in particular for C1- and C2-chemistry and fuels, but developments seem to indicate that shale gas and biobased economy will both find their ways into the economy. At any rate in the chemical sector. It may have been a near miss, but apparently the biobased economy had gained so much momentum when shale gas made its entry – the world appears to put a premium on green – that this was not swept away by cheap gas.

Second generation bioethanol still a viable opportunity
Let us turn to shale gas versus biofuels before touching the subject of chemistry. We guess that ethanol production from agricultural waste will continue to develop, including production of second generation biofuels. At least in countries where little stands in its way, like Brazil. In the US, with major plans to produce second generation alcohol, things might be different. I do not hear much about developments, maybe they do their maths. Countries like China, Australia, Argentina and Mexico, like Ukraine and Poland, are expected to speed up their shale gas developments. 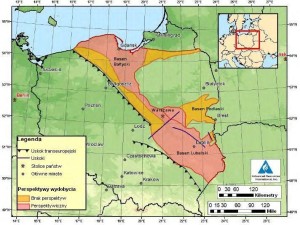 Poland will be the forst EU country to recover shale gas. Exploration is going on. The main reserves are in the Southeast, near the Ukrainian border.

But there is a difference between shale gas and fuel, and it will take several years before the mega expensive US ‘gas-to-liquids-plants’ will come on stream. Europe however, with its limited resources and provisional moratorium on drillings, will probably not fully develop shale gas; but it might see through its second generation ethanol projects. Would that turn Europe into a biobased continent, and opposed to the US (and others) which would develop into shale gas countries? It would seem a little bit early to predict, but if economically viable, it would mean a perfect development for our continent. Also because of the new technology which we will develop.

Urban legend
As a matter of fact, the most negative stories about shale gas appear not to be entirely truthful. In particular, water usage (less than with fossil fuel recovery) and water pollution seem to be bearable. We can safely dismiss as urban legends stories about flames from the tap in American households (or this might be a result of collecting methane from higher strata in the subsoil). Moreover, it appears to be viable to use supercritical CO2 instead of water to push gas out of the fracked rock. All this would seem to be rather favorable. And there is another advantage of shale gas use: gas produces much less waste than coal; Americans now affirm that by substituting coal with shale gas, they will meet the Kyoto requirements imposed on them (which they did not bother much about, so far). Although on a global scale this will not make much difference, because the US will ship abroad the coal they do not use any more themselves, to China and Europe, where they will continue to emit their CO2. 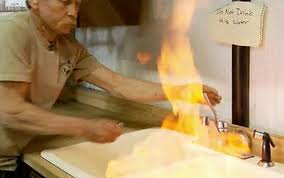 The Americans count on creating hundreds of thousands of new jobs in the US, and a competitive industry, and energy independence through gas exports. Not a bad prospect for Obama. Geopolitically, they will make major gains: a fat lot to the Russians, and thumb their noses at the Middle East. There is nothing to worry about for them, paying a gas price ten times as low as it used to be, and five times as low as the price Europeans pay. They extend this new activity to the chemical sector as well. Rumour has it that they already retrieved a methanol factory from Chile, and reconstructed it, and consider the construction of new fertilizer factories of their own. On top of all the other activities they retrieve.

Beyond food/fuel discussions
What will be the influence of the new gas finds on the chemical sector? Chemically, processing shale gas merely consists of ethane cracking, which will result in C1- and C2-products. But the gas does not contain higher alkanes and aromatics. Therefore, we can build up a new C1- and C2-chemistry from shale gas (still half of the entire production in chemical industry), and process these products in the traditional chemical way. But because quite often, above C3 fossil chemistry is more expensive than direct production through fermentation from renewable resources, biopolymers like PLA end chemical building blocks like biosuccinic acid now evolve to major opportunities.  It therefore does not seem to make sense any more to import ethanol from Barzil in large quantities, dehydrate it to ethylene, and use that in ‘traditional’ chemical processes. Having cheap shale gas at hand.

But to me, the main opportunity of the advent of shale gas appears to be that it can end the derailing food/fuel discussion. Tomorrow’s question is not substitution of fossil fuels by biofuels. We should not even strive for that nay more; shale gas can fulfil that role much more efficiently. With the proper CO2 management, of course. We can then use the available biomass for ‘food, feed and functionals’, the higher levels in the value pyramid. Just like we used to propose and promote. That would entail quantities to which NGOs could hardly object. Biofuels will still be in demand, but just as a transient solution and in (much?) lower quantities. Let us develop other technologies for propulsion, and even more so for the production of new materials.

The biobased economy will not solve the energy problem. It has not the capacity to do so; but it does not have to. Nor will it be a remedy against climate change. It is a positive development, all by itself.