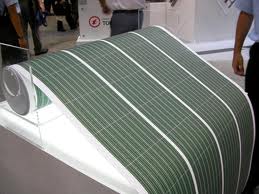 Whereas silicon wafer based PV technology keeps improving and production costs of PV electricity keeps falling, thin film PV is on its way to develop as a mass product as well. Most experts judge that thin film solar cells will dominate the solar electricity market in due time. This is because of their inherent advantages: low materials use, and the prospect of being produced with the cheapest production technology available (roll-to-roll, like a newspaper). In the Eindhoven-Leuven-Aachen (ELAT) region, companies and research institutes join their forces in Solliance, in order to become a world player in this area. But it will take many years before thin film cells will acquire dominance.

PV: continuous growth
Solar energy develops at a spectacular pace. By the end of 2010, world installed solar power amounted to 40 GWp; ultimo 2011 it was 67 GWp, an increase of more than 65%. The crisis notwithstanding, 2012 witnessed the approach of the 100 GWp level. For ten years at a stretch, solar energy growth surpasses even the most optimistic expectations. Although at present the crisis causes a slowdown in growth, experts judge this to be just a temporary dip in a robustly increasing trend in the long run. Thin film PV’s market share has dwindled in the past few years because of the explosive growth of wafer based production capacity, but the sector expects its return to solid growth in the years to come, from 12% in 2011 to a possible 30% in 2020.

Production technology now dominates the major improvements in silicon wafer technology – a sign that the technology is becoming mature. New cell productivity improvements are in development, but they require another cell and module design: a step toward the technology’s next generation. In thin film technology, there is still a lot of movement in all components of the product, which entails many opportunities for improvement. Right now, there are four major thin film families already: CIGS, CdTe, thin-film Si, and organic solar cells (OPV). Of which the first three are commercially available. And within each family, the R&D program stretches from fundamental research (for instance electron transfer mechanism), through cell design, to production technology. Nothing is fixed yet. Fundamental discoveries still can deeply influence design, and the production process. 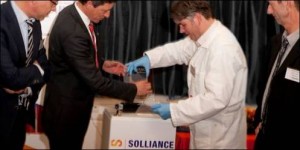 The new innovative Solliance CIGS production facility
Solliance unites the massive concentration of scientific research and of production technology expertise in the ELAT region. The names of a number of participating organizations need no further praise: ECN, imec, Holst Centre, TNO, TU Eindhoven, Forschungszentrum Jülich – each an institute which belongs to the top in its country, and even in the world. In Solliance they cooperate and share their knowledge among each other – and with the large number of companies in the region concentrating on innovation in production technology, production equipment, and services.

Solliance has been in existence for a few years already, but recently organized its first conference. To the occasion of which a new CIGS demonstration production facility was inaugurated. Within thin film technologies, CIGS has a relatively high productivity, and therefore it has attracted a lot of attention in recent years. Ando Kuypers, leader of the Solliance CIGS team, stresses: ‘this new Solliance CIGS facility is an open facility that will enable equipment manufacturers to test their own systems and processes and to develop equipment for cost-efficient production.’ 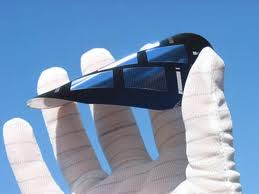 PV: everything is open yet
In the past few years, the Chinese have developed a very strong foothold in solar cell production: from 2009 onwards, they are the world’s largest producers. The advantage is that they always have the most sophisticated PV cell factories. The lectures at the Solliance conference made it clear however that Europe is not finished yet. PV cell production does not represent the majority of value added in the production chain any more. Increasingly, value is added in production equipment development on the one hand; and in installation, maintenance and services on the other.

That everything still is on the move was illustrated by a short debate on the possible combination of wafer technology and thin film technology. Marc Meuris of imec, Solliance’s Flemish partner, suggested to produce hybrid panels consisting of a thin film cell mounted on a silicon cell. Advantage: increased productivity. Problem: the top cell must meet very strict requirements. But if you can do that, so ECN’s Wim Sinke retorted, you could also produce an efficient double layer thin film panel. That might be more logical and more elegant. Such panels could become competitive in productivity with silicon wafer panels, which by the way also will improve in the years to come. Conclusion: everything is open yet, industry abounds with new ideas, PV will continue to surprise us.