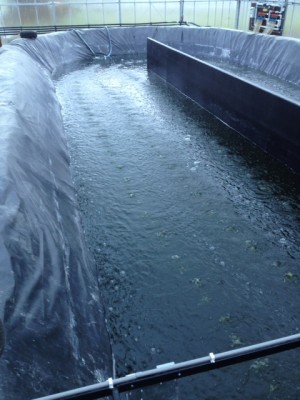 Biofuel, fodder, chemical platform chemicals, and high-value specialties production. From algae which grow up to ten times faster than plants in the soil. It has the appearance of the biobased economy itself: major projects, a lot of research, test sites and pilot plants, but the large scale substitution of fossil products by their green counterparts from algae has not yet made a take-off – apart from some pharmaceuticals and neutraceuticals. That is evident from reviewing cost price claims, which range from $ 8 to $80 per kilo. Way too much if biofuels are the intended product. Cost prices should fall tenfold, production should increase one hundredfold, and technology should be improved at all process steps. But algae will make their breakthrough. I guess. Surely if one takes in mind the high sums that are at stake in many places.

Many cultivation methods
Do we have to grow algae in open ponds, in oval open ‘race ponds’, or in closed reactors consisting of glass tubes (biotubular reactors)? Using extra mirrors, or applying extra lighting in the water or around the biotubes? The open pond method is the cheapest one and by far the most popular at present. I.e. race ponds in which the algae move around. The cultivation method in closed phototubes is expensive and high-tech, but easier to manage. Globally, open ponds produce some 30 million kilograms per year, whereas closed systems production amounts to a mere 0.1 – 0.2 million kilograms. Biotube producers claim that open ponds will get silted up, because sunlight would not penetrate more than 10 cm in depth, and that pollution and infection would be permanent threats. I would judge that to be grossly exaggerated, in view of the sheer volume of open systems production. And questions about cultivation methods are just the tip of the iceberg. We do not know how many algae species exist (at least some hundreds of thousands, of which we know less than half), but we merely investigated some dozens of species. In quite unexpected places we will continue to find new useful species, and use them, genetically modified or not. 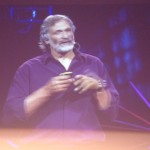 Still a long way to algae biofuels
At the Seventh International Algae Conference, early December in the Rotterdam ‘floating pavillion’, the differences in opinion merrily continued. Both cultivation methods will eventually find their way. But it became clear that algae biofuel will not be an option for the next few years, although even on this issue some scientists hold a different view for the longer term, and even have major projects in mind. Jonathan Trend, a NASA nanotechnologist  for instance, envisages algae production at sea in floating transparent plastic bags in his OMEGA project (Offshore Membrane Enclosure for Growing Algae) off the coast near San Francisco, using municipal waste water as a feedstock. He would like to produce aircraft biofuel, using algae with a high oil yield. And there are more projects like this one. In Portugal, A4F(Algae for Fuel) has finished tests and is now constructing (together with a cement company) the world’s largest tubular photo bioreactor, which will operate fully automatically, including harvesting the crop. Others take a much more prudent view. Cees Sagt, a geneticist at DSM, who supplied most figures in this article, comments that his company watches closely what others do, but does not have concrete steps in mind so far. 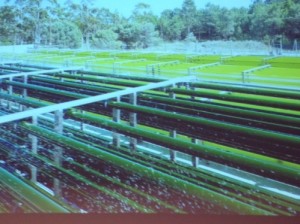 A wide range in claimed production costs
The many international conferences containing the word ‘Algae’ in their titles testify to them being a hot topic. But quantitatively, they do not play a major role as yet. On a small scale, algae are successfully employed for pharmaceutics and cosmetics production. The heated discussions on the best cultivation methods and harvesting technologies may just testify to the fact that we witness the beginning of an industry with a bright future. Also, there is a wide range in claimed production costs for algae biodiesel: from € 0,5 per liter (just forget it), to € 5, or even much more. Nevertheless, some major projects are operational and others are in preparation. Thanks to algae’s fast growth and high yields in products like fatty acids, proteins, starch, multiple unsaturated fatty acids and carotene for fodder and fish feed, and for human consumption. And ‘in the future’ for biofuel as well.

Fifty years of research
But let us start at the beginning. For how long algae have carried high hopes for future production of useful substances? According to John Benemann, who almost witnessed the birth of algae research, the first serious attempts took place around 1950 on the roof of the MIT building in Boston. Using open ponds and fresh water. Soon the Japanese started commercial production, and Australians investigated algae in sea water. At first, researchers had high hopes for a breakthrough, and hoped to reach a 12% productivity (on the basis of sunlight input) on a short term. ‘Nonsense,’ Benemann says, ‘a mere 3% was an excellent yield.’ But researchers’ expectations continued to be high; they envisaged a quick substitution of as much as one sixth of American oil production from algae. And now, decades later, Benemann still holds the view that biofuels and chemical platform chemicals from algae are quite realistic, and so do many others. But apparently these are difficult organisms, and he too is of the opinion that technology still has a long way to go. Which boils down to: hard work on algae biology, on cultivation methods, on harvesting methods and product dehydration, and on the economy of the entire process. 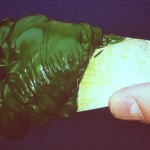 Moreover, many different harvesting technologies
Researchers more or less agree nowadays on the question which alga is the most suitable for a certain product; but the dozen or so algae now in use certainly do not represent ultimate wisdom. There is such an amount of algae to be discovered yet, and their biology and production mechanisms can be improved to such an extent, that it will take considerable time before we established and modified the best organism for each job. Likewise, harvesting and dehydration methods are hotly debated: centrifuge, membrane filtration, simple precipitation or more sophisticated flocculation techniques. And then we did not even touch the subject of the percentage of dry matter which results from each of these harvesting techniques. Each and every algae species, each concentration, and each cultivation process has a harvesting technology of its own.

An interesting technology, discussed in the floating pavilion, was the Evodos (a Dutch company) low velocity centrifugation technology, which does not even break up the fragile algae cells. They call it the Spiral Plate Technology, and attain a dry matter percentage of 98%, in which figure they do not include the water within the cells (up to 70%). The company sells dehydration equipment on a laboratory scale and a bigger one for pilot facilities. In the near future they will market a device for commercial production. Evodos claims harvesting costs at € 100 per ton of algae (dry weight). Which indicates that this technology too is in full development yet.

Highly technological
For algae production, Northwestern Europe is not too cold and too dark. Just keep in mind what Dutch horticulture has achieved. Light, carbon dioxide and heat allow for competitiveness at a global scale. Algae use this feedstock as well, so an intensive algae production would be quite possible in these regions.  In addition to that, algae can grow on nutrients in waste water. And they even grow faster if they are provided with light of the correct wavelength. A Dutch example is AF&F’s Arnoud van Diem on the ACRRES site in Lelystad, who grows his algae using LED lamps. But that story is told elsewhere on this site.