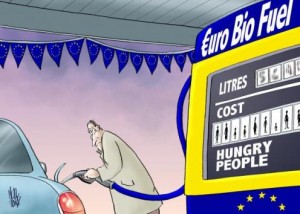 Oxfam: no burning of food

One thing that I have learned in my NGO experience is that it is better to work on investment than on trade. If I would manage to convince a producer to make certain adjustments in their investment policy (environmental and social considerations, site selection) this would be a lot more productive for the company and the host country. After all, adjustments are easy in the beginning of a project.
The disadvantage of working on trade is that the products are already made and that is why NGO campaigns on trade are potentially a lot more hurtful. The factories are built, the products are made and then these NGOs come with their complaints. Many producers have told us to be more timely with our concerns.

But the other side of the coin is that investment campaigns are based on assumptions. The conditional phrasing that mr Van der Hoeven noticed in our hunger grains report is unavoidable. Should we wait every time till the damage is done and we have hard facts? Nice for a campaign, but not for the world and the people that live in it. Yes, it is true that for the moment, the Dutch import mostly European Biofuels, and not African Biofuels. But in the future, at least half of the EU’s Biofuels will come from outside the EU. And besides, we do not believe in burning food, whether it is European, American or Tanzanian.

A growing coalition
The large scale land acquisitions that are associated with our demand for biofuels are so controversial in many countries that we do not believe the world should take that risk. In a world where land rights and human rights are not effectively protected, we do not believe that selling land is a viable policy for developing countries. We are in good company, scientists, UN institutions that specialize in food security have called for radical abolishment of all biofuel mandates. Food companies have also warned against the use of biomass for energy, resulting in a growing coalition against the EU’s biofuel policy.

Oxfam has done many campaigns relating to agriculture, covering many aspects of the global agricultural system. Every time, our campaign targets suggest us kindly to target others. This is understandable, but it is not going to work. Asking us to `Pass the buck’ will not change our mind.