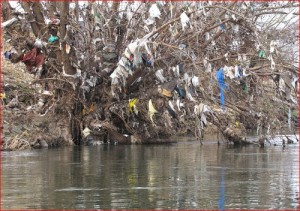 ‘Look, this is the picture which made me decide to do something about it,’ says Peter Smith, a photographer living in Amsterdam. ‘Which river do you think this is?’ ‘The Maas.’ The picture was taken by Peter Driessen in the neighbourhood of Maastricht, early 2010.

‘Why does nobody do something about it?’ was Peters first reaction. And then he remembered to have posed that question to himself, when he wandered along the Maas a few years earlier, and had seen a similar spectacle himself. So he decided to go and do something about it. He tries to illustrate how much 100 billion kilos of plastic waste is, the amount which now litters our oceans. He shows a picture of a hangar filled with plastic waste, and asks in what time frame the world delivers this amount to the ocean. ‘An hour,’ I endeavour. ‘Fifteen seconds,’ he answers.

The plastic soup was discovered in 1997 by Captain Charles Moore, an ocean racer who decided to take an unconventional route through the Pacific Ocean. The amount of plastic he discovered, startled him, and from that time onwards he wages a fight against the plastic soup. ‘Do you know that almost all the plastic that ends up in the ocean, is from litter in our streets?’ asks Peter. ‘Most cities have been constructed on river banks, which made them accessible. Those same rivers now transport our litter into the ocean.’ And Peter explains why this plastic attracts pollutants in the ocean, causing them to return in our food chain. 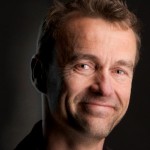 We invited Peter to blog for our website. We will publish articles on litter and the plastic soup on a regular basis.