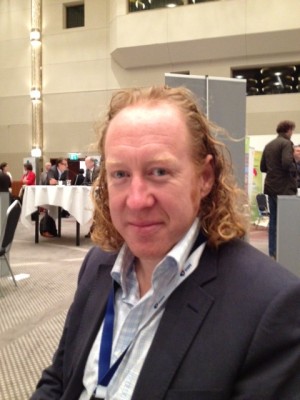 Another pronouncement by Sean: ‘There is no such thing as waste.’ That is LanzaTech’s philosophy. They process all kinds of waste: gaseous or solid, biomass or municipal. They see opportunities to process it into fuels, chemical building blocks, and polymers. By gaseous fermentation. All done with their own stock of microorganisms. One might wonder, why has not that been done much earlier?

LanzaTech is the pet company of the international technology sector, and that is apparent at exhibitions and congresses. Sean Simpson, the New Zealand company’s Chief Scientific Officer, is hailed as an international star, and rightly so. The company was founded only in 2005, but everyone wishes to cooperate with them. LanzaTech is in the top 100 of Global CleanTech companies, they are awarded a Red Herring every year, and MIT and the World Economic Forum count them among the most innovative companies in the world. Sean Simpson kindly accepts this praise, but his enthusiasm for his own Gas-to-Liquid processes is contagious. In Essen, Germany, at nova’s CO2 conference, he was awarded the title of most innovative entrepreneur; and at EFIB in Düsseldorf, a week later, the audience hails his presentation with enthusiasm. Just a trifle short of a standing ovation.

‘Waste gases from steel industry are rich in carbon monoxide; and all incineration processes produce carbon dioxide,’ says Sean. ‘We can produce both fuels and chemicals from those gases, and from methane. Whatever we want, provided we have got the right feedstock and the right specialized microbes. Even with a relatively high efficiency.’ He does not want to communicate exactly how high that efficiency is, and that seems to be logical when a 3% efficiency in ethanol fermentation is reckoned to be high already. As yet, LanzaTech does not earn a profit, but that would be difficult indeed for a company with a workforce of 150, of which 100 are employed in R&D. ‘But we expect a break-even in 2014,’ and that would be a remarkable achievement. It is a typical small high-tech company commanding its own technology and processes, which suddenly seems to make a breakthrough into processing waste gases, creating a sector of its own. And without using sugars, sugar industry waste streams, or other agricultural products as a feedstock. No wonder they attract attention.

‘There is no need for dedicated energy crops. There is too much talk of agricultural feedstock and infrastructure. Using carbon monoxide from steel industry’s waste gases, you will neither have problems with feedstock nor with infrastructure. Everything is available on-site, and feedstock is in ample supply. Our product is better and cleaner than traditional bioethanol,’ says Sean. He shows a map with Chinese steel factories, all across the country. He plans to construct ethanol plants at all these sites. The first demonstration unit (producing 100.000 gallons/year) has been constructed in Shanghai at the Bao Steel factory. It is a scale-up of LanzaTech’s pilot plant in New Zealand. Commercial installations will follow suit. In China, too. ‘The process is cost-effective already. At present, we project to build a production capacity of 30 million gallons/year, to produce ethanol that can be used directly as a fuel mixed with gasoline or an intermediate for jet fuel for Virgin Atlantic.’ Why jet fuel? For airplane companies, using biofuels is the only way to comply with exhaust gas regulation which will be enforced in the future, in this sector as well. Flying electrically or on hydrogen is not practicable. And the fuel produced by LanzaTech is non-food: thereby they evade the food-fuel discussion.

This merely lays out LanzaTech’s carbon monoxide projects; but carbon dioxide processing is in its schemes as well. Followed by production of chemical building blocks. The same holds true for processing syngas, or biogas from biomass. The only conditions are that the feedstock is gaseous, and that LanzaTech has the right microbe in its collection. Fermentation produces the right product. They plan to produce chemical building blocks like isoprene, butadiene and many others. The sky is the limit. Literally, because in the future LanzaTech will produce the building blocks from the air.