You are here: Home / 2022 / June / Local optimization, against congestion on the grid

In the Netherlands, Amsterdam suffers from congestion on the grid. As do other locations. Sustainable energy projects are stalled because of it. New business projects suffer the same fate. The solution, according to grid companies? More capacity on the grid! But it takes years to arrive there. Whereas local optimization will largely evade these problems. ‘The grid’s capacity is filled up, but only so on paper.’

The grid has become much more complicated

Science journalist Sabine Sluijters discusses these problems on the site of Change.Inc (link in Dutch). The grid’s capacity is being filled up to the max, both on the side of supply and that of demand. Solar panels, wind turbines, electric cars, heat pumps. Meanwhile, the economy keeps growing, resulting in a higher electricity demand. Some new projects cannot be realized because of congestion on the grid. Amsterdam is a hotspot, as it has become popular as the location of (energy guzzling) data centres.

Harold Veldkamp, program director of the Dutch Energy Topsector, judges that grid operators approach the problem from the wrong side. Grid management should improve, he judges. In the past, all electricity moved just one way: from the power station to the consumer. Nowadays many consumers appear to be producers as well – with their solar panels, wind turbines or biogas installations. According to Veldkamp, grid operators still live in the past. They judge more grid capacity to be the only solution.

Towards less congestion on the grid

Veldkamp judges regional optimization to be a clever instrument for preventing congestion on the grid. Balancing as much as possible supply and demand. If local production should be used locally, electricity doesn’t have to be transported over large distances anymore. But the problem is that grid operators cannot identify such mechanisms to take place – let alone manage them. Therefore, digital grid management needs to be decentralized. And that is still a long way to go. The Dutch Consumer and Market Authority now has ruled that the capacity of a cable is filled up when grid operators have charged it with 110 to 150 percent of nominal capacity. But that is a coarse ruling, for often the actual situation on the grid isn’t at the basis of management. 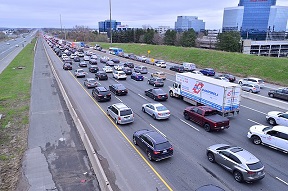 In order to prevent congestion on the grid, new collectives of companies build an energy system of their own. Sluijters mentions the example of Schiphol Trade park, where 15 companies together manage the use of all connections to the grid (link in Dutch). Joulz company coordinates this effort. They design the energy system and manage it. This includes batteries and – just for use in winter time – a gas-fired generator. An ICT system designed by software company Spectral ensures a sufficient supply of (sustainable) electricity at all times to each company. The model also includes the weather forecast, and real-time prices of electricity and gas.

Another company in this field is Groendus. They too organise ‘energy islands’; within such an island demand and supply are optimally coordinated. Ultimately, this will result in a grid that needs to meet a much lower demand. Veldkamp expects such ‘energy islands’ to pop up more and more. With major positive results for the stability of the entire system.

But in the end, the optimization programs of the various energy islands will have to be able to exchange their data. Giving rise to a new optimal energy system. Not just on a national scale. On several locations, the Dutch grid is connected to the wider European grid. Other countries should be able to read the system as well. But the fact remains that progress along these lines will be cheaper, and that it will much faster result in less congestion on the grid, than heavier connections. New technologies force grid operators to optimize their systems on a micro scale, instead of relying on an exchange on a macro scale.

Interesting? Then also read:
Ten times as much solar energy
Smart grids: the power of the small scale
Scale issues in the energy transition