You are here: Home / 2022 / April / Thermal batteries that store solar and wind power

Thermal batteries are yet another way to store an excess of solar and wind power. According to the laws of physics, they would seem to incur major energy losses. But on the other hand, they might be very cheap and flexible indeed.

On this site, we already went into the question of how to store an excess of solar and wind energy several times; in order to use this energy when supply is low. An article in Science drew our attention to an improbable option: thermal batteries that store renewable power. Not an option that would come to mind easily. For although the conversion of electricity to heat can be done without any appreciable energy loss, the conversion back from heat to electricity is quite problematic.

We could use the Carnot cycle, as is being done in conventional and nuclear power stations. With a fair efficiency of 40%, or somewhat more if we use a gas turbine ‘in front’ of the usual cycle. But some researchers now revived an old idea. They convert an excess of electricity into heat. They then store this and use the radiation emitted by hot objects, catching it in a kind of photoelectric cell. They funnel the stored heat to a tungsten film or filament, setting it aglow like the tungsten wire in an incandescent light bulb. And then absorb the emitted light and turn it to electricity. 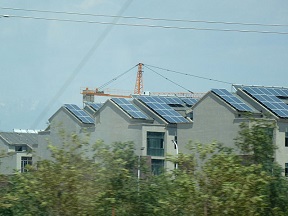 How to store an excess of solar energy? Photo Ismoon, Wikimedia Commons.

The rise of thermal batteries

Again, this is an addition to our inventory of energy storage technologies. Again with its strong and weak points. The thermal batteries or thermophotovoltaic devices (TPV) as they are called, can store energy for a longer period than batteries can. On the other hand, their efficiency will always be modest. But as said, that may not be a major problem if the equipment is very cheap.

When TPVs were invented in the 1960s, they only converted a few percent of the heat energy into electricity. That efficiency jumped to about 30% in 1980; but until quite recently, it has been stuck there. The reason being that hot objects radiate photons across a broad spectrum, from ultraviolet to far-infrared. But all photovoltaics only absorb photons in a narrow range. Light with higher and lower frequencies therefore tends to be wasted.

Recently however, a team at the Massachusetts Institute of Technology (MIT) and the National Renewable Energy Laboratory in the Us achieved an efficiency of about 40% with an improved device. In the new device, both the emitter and the TPV have been changed. Previous thermal battery setups heated the emitters to about 1400°C. This maximized their brightness in the wavelength range for which TPVs were optimized. The new device has a temperature 1000°C higher; tungsten then emits more photons at higher energies, which could improve the energy conversion. But in order to catch that energy, the team had to rework the TPVs as well.

To that goal, they laid down more than two dozen thin layers of different semiconductors on top of one another, in order to create two separate cells. The top cell absorbing visible and ultraviolet photons, the lower cell absorbing infrared. A thin gold sheet under the bottom cell reflects low-energy photons the TPVs couldn’t harvest. The tungsten reabsorbs that energy, preventing it from being lost. The researchers report in Nature that their TPV converts to electricity over 40% of the energy emitted. And they see ways to do even better. With a mirror able to reflect nearly 99% of unabsorbed infrared photons back into the heat source. They project to be able to reach 50% efficiency.

Much interest for thermal batteries

The TPVs are made from III-V semiconductors, more expensive than the silicon used in rooftop solar cells. But other parts of a thermal batteries, including graphite, are cheap. The team also created ceramic pumps that can handle the ultra-high-temperature liquid metals needed to carry heat around an industrial scale heat energy storage setup.