Each year, planet Earth loses 13 million hectares (32 million acres) of forest. Since 1960, more than half of all tropical forests have disappeared. Particularly because of logging in the tropical rain forests of Brazil and Indonesia. Logging also takes place in other countries, and deserts grow. But the Dutch Groasis company developed a technique for planting trees in arid areas. Since 2003, the company and its partners planted 2 million trees in 55 countries. A strategy that counteracts desertification and water shortages. 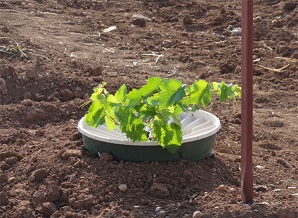 Groasis uses a technique developed in-house. They plant the sapling with the amount of water it needs in order to stay alive. Not too much, for it needs to find ground water quickly, by penetrating into the soil with its roots. Those roots grow by a half to one centimetre per day, after a year they measure 2 to 4 metres already. The company uses this technique in dry, eroded or rocky surfaces and deserts. Groasis doesn’t irrigate the trees. As a result, water conservation already amounts to 90% in the first year of plantation, in comparison to other methods like drip irrigation. From the second year onwards, irrigation isn’t needed at all anymore; water conservation then amounts to 100%. In this way, they create green areas and counteract desertification.

Groasis uses the term biomimicry for its water-conserving Waterboxx© technology, imitation of nature. Like by:
– soil improvement, using compost and mycorrhiza;
– application of the appropriate plant varieties, with roots growing fast and vertically;
– the use of cocoons, and plant protection foils that protect the plant from being eaten, developed precisely for this purpose. The farmers can remove these items after about a year, the tree is large and strong enough then to stay alive. 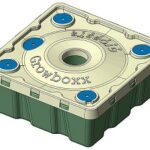 Groasis’ technology is cheap. Planting the saplings costs about $ 2,50 per tree; they claim this to be some 90% cheaper than other technologies. There is hardly any, or even no need to use pesticides – whereas these are often required if the farmer uses drip irrigation. More than 90% will stay alive, as concluded by researchers of the University of Valladolid on five projects at difficult locations in Spain.

Desertification is a major problem in many countries. Because of logging; and because of climate change. These can have a combined effect. For instance, the Canary Islands used to have a thick forest cover; but most trees were felled, and now rainfall is quite rare. Groasis planted a few hundreds of thousands of trees and hopes that rain will return. In other locations, like Kuwait, a Groasis project forms a barrier against the ever expanding desert. The Dutch company and its partners have now planted 2 million trees in 55 countries. The company aims to put a halt to desertification and restore fertility to the soil. That will result in employment and food production, it will restore ecosystems and roll back climate change.

Groasis was founded by Pieter Hoff, deceased in April 2021. In his company, he used to grow lilies. When travelling abroad, he witnessed forests being felled, agricultural land disappearing and deserts increasing. He developed the Waterboxx in 2003, much improved now since the original model. After his death, his son Wout Hoff took over the helm. ‘I continue to execute his mission,’ he says to the site change.inc. ‘My father’s lifework shouldn’t go down the drain. This is his legacy.’ So he quit his well-paid job at the British chemical company Ineos and became Groasis’s CEO. A fulltime job; alas unpaid, as the company isn’t profitable yet. ‘Fortunately I have savings at hand, and my wife has a good job,’ he says. ‘For this is much more satisfactory than anything I’ve done before.’ 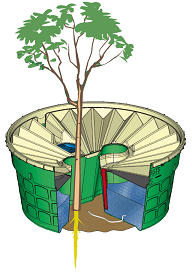 The Groasis Waterboxx is a bucket turned upside down. In the middle, it has an 8-shaped opening; underneath there is room for one or two saplings. At night, the desert cools down and water condenses on the lid; there are V-formed ledges that direct the water towards a container. Any rain water will be stored in a reservoir. Because the soil is covered, capillary ground water can surface. The water can come in, but it cannot escape. The plant can drink it – but not in excess, for it needs to grow strong and deep roots. It is protected from being eaten by a foil. After six to twelve months, the plant can survive on its own. The farmer can then remove the Waterboxx, for it to be used elsewhere.

Groasis is active in many countries. In Dubai, an extremely dry and hot country, the company successfully planted Ghaf trees (Prosopis Cinerea), a local variety. In Ecuador the company planted vegetables and fruit trees without any irrigation. Equally in Ecuador, the company organized a tree planting contest for school kids in 2014. The winners were awarded computers for use at school, worth half a year’s salary. On the Galapagos Islands, the Waterboxxes restore plants and animals that were almost extinct. In Peru, Groasis planted trees in an area where it hadn’t rained for twenty years at a stretch. After one year, the trees had grown to a height of two metres already. In Morocco, Groasis planted tamarisk trees that put a break on the dessert coming in.

The Growboxx is new. This is a biodegradable version of the Waterboxx, made from recycled paper pulp. It allows to plant trees and vegetables even cheaper in very dry locations. On the other hand, it doesn’t capture water that condenses; these plants still need the assistance of the farmer who waters them. Therefore, the Growboxx is particularly suited for growing food. Mali, Chad, Colombia and Algeria are among the countries that use this equipment. 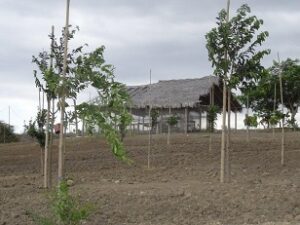 It is often challenging to use such techniques in dry areas, even though they come with their rewards. Many dry areas have sufficient rainfall (250-500 mm per year), but often this is distributed quite unevenly over the year. It may rain for one or two weeks, and then not anymore for fifty weeks. Crops that grow from seeds (corn, vegetables, wheat) cannot grow there without irrigation. Groundwater is in limited supply, and often overused already. But then, we can also plant trees to grow food. Often, trees will be able to survive if they stay alive during their first year; with the aid of taproots that may be as long as eighty metres. And that first year is precisely the period covered by the Groasis technology.

For growing vegetables, Groasis developed the Climate Control House. This cover will keep temperature down at daytime, even in deserts, and up at night. And humidity is also being kept within limits. In order to prevent high temperatures during the day, Groasis uses a double deck. A black deck for protection, and on top of that a white deck that will reflect solar radiation. Placed some two metres higher than the greenhouse, resulting in an air current that removes the heat before it can enter into the greenhouse. In that way, Groasis helps low-income farmers in producing vegetables. Then they can bridge the five to seven year period before the fruit trees bear fruit. By such measures, the company also hopes to stop the globally occurring drain of workforce from agricultural land. After all, we still need farmers to feed the world. Therefore, the company also provides farmers with education and capital, allowing them to start a business of their own. A model suited in principle for all 300 million poor farmers, all around the world.

Deforestation and desertification undermine the livelihood of 1.6 billion people, particularly in poorer countries. And the habitat of over 80 percent of all animals and plants. In order to put a break on that development, the United Nations formulated the fifteenth Sustainable Development Goal (SDG 15). It promotes sustainable management and restoration of forests, and intends to counteract desertification.

In order to reach that goal, Wout Hoff is looking for partners and investors. He stimulates his distributors to cooperate with local authorities and companies. Groasis makes use, in doing so, of the trade in CO2 emission rights. For companies that emit too much CO2 can compensate this by participating in green projects: by buying so-called carbon offsets. A market opportunity for us, says Wout Hoff: ‘An opportunity to finance projects that will make useful again degraded land. Companies that cannot reduce their emissions by 100 percent, can make a choice for this pathway. And that offers new opportunities to us.’

Interesting? Then also read:
Could reforestation stop climate change?
Ecomodernism, a great idea and a big disappointment
A plant-based diet would have a major impact on climate change