Seaweed has many applications. It is processed to food additives and mock meat products. It is used in additives in the food of chickens, pigs, cows, pets and horses. As a seaweed-biostimulant it can reinforce the qualities of soils and crops. An element in the production of high quality food without compromising on environmental quality. 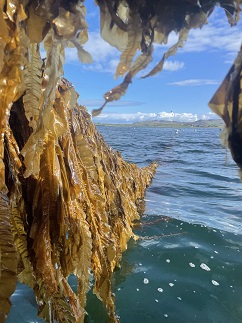 The Dutch enterprise The seaweed Company, founded in 2018, produces seaweed in its farms in Ireland, Morocco, India and the Netherlands. Growing seaweed doesn’t just produce a marketable product. In its growth, seaweed takes up CO2, and therefore it contributes to de-acidification of seawater. Growing seaweed also results in better biodiversity in the sea. Recently, the Belgian family business Colruyt took a share in the company. With that participation, the enterprise can scale up further. The company aspires to introduce seaweed on the menu with farmers, consumers and companies in Europe.

Starting last year, it sells seaweed products in the concepts Blue Farming and Blue Health. With Blue Health the Seaweed Company tries to support the transition towards a more sustainable menu. With Blue Farming it intends to contribute to better sustainability of agricultural production chains. By selling food supplements for animals; and a seaweed-biostimulant that reinforces soils and crops. This year it organizes a test on two farms in the Netherlands, intended to show the viability of a few projects. Like soil improvement, improvement of health and productivity of dairy cows and the development of a number of seaweed cheeses.

Seaweed projects on the North Sea can very well be combined with wind parks. For safety reasons, commercial shipping will have to evade such parks. For the same reasons, fishing isn’t allowed there. That’s why wind parks are quite suitable for other ways of commercial exploitation of the sea; like growing seaweed in farms.

And tests have shown the viability of yet another sustainable combination: combining growing seaweed and solar parks at sea. The first pilot project was in 2019; the system withstood waves 4 metres high, even in a storm. In 2020 a new pilot project started, farther from the coast, where wave can be as high a 13 metres. If the system withstands these waves, it is ready for the construction of combined offshore solar, wind and seaweed projects, ranging from 100 to 5,000 MW per project. According to the Seaweed Company, even the densely populated Netherlands, with its lack of free space, will then be able to produce half of its energy demand with a coverage of just 5% of the Dutch part of the North Sea.

The most recent product of the company is the Seaweed Crisp. Developed by the Japanese company Mitsuba. Seaweed is a traditional ingredient in the Asian kitchen. Mitsuba intends to introduce seaweed as a food ingredient in Europe as well. It is a befitting part of the Seaweed Company’s mission: the development of reliable, sustainable and socially responsible seaweed chains. In doing so, the company will produce employment, while also contributing to a more sustainable environment. And they have major ambitions. Like the regeneration of 1 million hectares of agricultural land.