This month, Science magazine devoted a long article to the ‘forest fight’ that rages in Germany. The debate on how the nation should manage its trees. Storms and drought played havoc on many forests over the past three years. Do we need to continue to ‘manage’ them, or should we now let nature take its course? 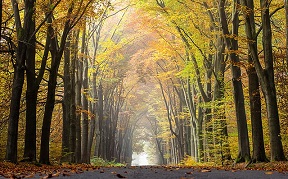 The article in Science, written by Gabriel Popkin, starts out by describing how an improbable chain of events led to a rare catastrophe. But perhaps it is more appropriate in an age of climate change to call these events ‘unexpected’. Leaving open the question in what measure we need to prepare ourselves for a repetition of them.

Let’s have a look. In January 2018, a powerful storm felled many trees, particularly spruces. After the event, woods in Germany contained abnormal amounts of dead wood that attracted bark-boring beetles. Then, over the next 3 years, a record drought hit Germany and much of Central Europe. In many forests the spruces, a species with shallow roots, couldn’t attain ground water any more. Therefore, they couldn’t produce the resin, that protects them from beetle attacks. And then suddenly in many forests, in just three weeks, the beetles jumped on the weakened spruces and killed them. Other forests, dried down, fell victim to fire. Many forest owners came on the brink of bankruptcy. In an attempt to earn at least some money from their dying trees, many of them cut down what still stood. And in doing so they flooded the timber market, causing it to collapse. Some land owners didn’t even earn the costs of collecting and preparing their harvest. 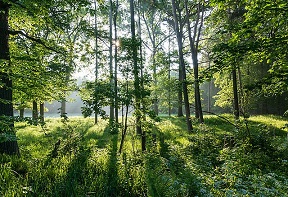 What to do with the forest?

So what to do now? Would it be wise for land owners to replant commercially valuable trees like spruce – running anew the risk of losing the investment? Should they instead allow forests to regenerate on their own? Or should they use more resilient varieties, that can better withstand drought than the shallow-rooted spruce? Let’s not forget that we might have to rely on wood as a construction material. Precisely because in its formation it binds carbon dioxide; instead of emitting it, like concrete. The stakes are high. And then we don’t even mention the economic importance of the wood industry, that employs more than 1.1 million people in Germany. About one third of Germany is forested.

To many, it is clear that forest owners will have to change their strategies in order to preserve healthy and productive German forests. But how? The author Peter Wohlleben holds that forests need to regrow naturally. This could revitalize ecosystems and start to reverse centuries of biodiversity decline. Simplified forests, so he argues, will always be vulnerable to climate extremes.

The value of biodiversity

Some forest owners took up this idea. In plots that they leave to regrow on their own, there is a lot of biodiversity. There are ‘more plant, fungus, and insect species than in cleared tracts. Soil temperatures in the uncleared tracts are lower on hot days, and winds calmer, helping the soil retain moisture. Moss is beginning to cover the ground where fallen trees have started to rot, preventing erosion and stimulating the growth of underground soil fungal networks.’ In another location, they even left the dead trees standing. And again, what regrows is far more diverse and resilient than a plantation. Such a forest will cope much better with drought and pests, saving their owners from unpleasant surprises.

But the idea of leaving forests alone alarms other researchers. For instance, the climate may change so quickly that even many native trees won’t survive. The problem may strike other species than spruce. Henrik Hartmann, a plant scientist at the Max Planck Institute for Biogeochemistry, argues that more than half of Europe’s forests are now vulnerable to insects, storms, fires, or a combination of these threats. Therefore, some foresters propose to replant species that have shown to be resistant to extreme weather conditions. This may include North-American species like Alaskan red cedar. Or native trees that haven’t been used much in forestry, such as linden and sweet chestnut. Or even better: diverse mixes of commercially valuable species. This will increase the likelihood that at least some will survive to their harvest age in a changing climate.

The forest is changing

In the meantime, govern policy is changing. In the past, it squarely subsidized removing dead wood and planting monoculture forests. Now, it only subsidizes schemes that replant a mixture of trees. And to a certain extent, it also subsidizes land owners who want to allow their woods to regenerate naturally. The new government, that includes the green party, even says it intends to change the law.  In order to increase native forests and end logging in publicly owned oldgrowth beech stands.

On the background of the debate the issue is, what forests are for. Do we value them for their commercial production? For their ecological value? For capturing and storing carbon dioxide? Or something in between? The discussion has become heated. Yes, some forests still need to be replanted. And there will be more room for natural regeneration. We may be sure, so the author concludes the article, that the forest of the future will look much different from what we saw in our youths.