In 1972, almost 10 years after Ampicillin, Amoxicillin is introduced on the market. As it seems, to stay there forever. Both products are developed in the lab of the British company Beecham (now a subsidiary to GSK). Amox is by far the largest and most successful end product, derived from penicillin. Its cumulative production (until 2020) amounts to more than 1 million tons. Pen G (2 million tons cumulative production) is bigger, but almost all Pen G is used as a starting material for the semisynthetic pens and cefs nowadays. 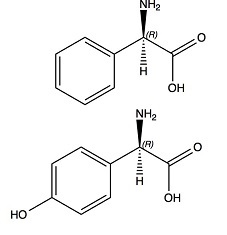 Industrial production of Amox much resembles that of Ampi. Once again, we substitute a synthetic side chain for its natural counterpart in Pen G. Moreover, the side chains are much the same: phenyl glycine for Ampi production, and para-hydroxy phenyl glycine for Amox. Even the industrial processes are quite alike. Petrochemical industry once more produces the resources. Starting from phenol now, instead of toluene. Furthermore we need glyoxylic acid; we produce that by oxidation of maleic acid (itself produced by oxidation of benzene, butane or toluene). The most effective synthesis of glyoxylic acid has been developed by Chemie Linz in Austria. Again, we need ammonia or a derivative thereof. The combination of phenol, glyoxylic acid and ammonia will produce para-hydroxy phenyl glycine. Just like in the production of phenyl glycine, we obtain this as a 50/50 mixture of its laevorotatory and dextrorotatory forms. Separation of the two much resembles the production of phenyl glycine. And again, coupling of the laevorotatory form with the penicillin nucleus to produce Amox shows many parallels to the synthesis of Ampi.

After the acquisition of Chemie Linz by DSM, the Dutch position for Amox much resembles that for Ampi:
– Sugar or molasses from the sugar factories in Northern Brabant or Groningen
– Production of the yeast cultures and fermentation to Penicillin G in the equipment of Gist-Brocades in Delft
– Processing to 6 APA in a separate factory at Gist-Brocades in Delft
– Toluene, benzene and butane from the oil refineries in the Rijnmond area
– Processing of toluene to phenol at Synres in Hook of Holland
– Production of ammonia at DSM in Geleen
– Oxidation of butane to maleic acid at Chemie Linz in Austria
– Ozonoysis of maleic acid to glyoxylic acid at Chemie Linz in Austria
– Combination of phenol, glyoxylic acid and ammonia to para-hydroxy phenyl glycine at (Océ) Andeno in Venlo
– Separation of the mirror images of p-hydroxy phenyl glycine at (Océ) Andeno in Venlo
– Preparation of laevorotatory p-hydroxy phenyl glycine for its coupling (with 6-APA) at Andeno in Venlo
– Coupling of 6-APA and p-hydroxy phenyl glycine to Amoxicillin (among others at DSM Deretil in Spain). 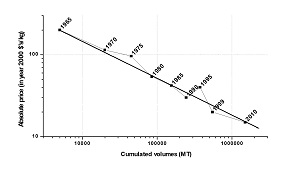 Process improvements over a period of 25 years have reduced the cost of the production of the most important penicillins by a factor 10. Price doesn’t stand in the way anymore of application of life saving penicillins.

The continuous growth worldwide of Amox allows the producers to continuously improve their processes; that also improves the product’s market position. The key resources always are phenol, glyoxylic acid and an ammonia derivative (ammonium chloride, urea, sulfaminic acid). Process efficiency improves continuously. In 1975, still almost half of the most expensive resource Pen G is being lost – it is washed into the sewer or the waste water processing unit. In 2005, that amounts to less than 10%. For glyoxylic acid, the next most expensive resource, during that period efficiency improves from 20% to over 75%. In sum, the total amount of waste in the chain sugar/oil to Amox is being decimated: from more than 50 kilos waste per kilo of Amox in the seventies, to less than 5 kilos at the turn of the century. Moreover, modern processing waste mainly consists of ammonium salts, not unlike those used in fertilizer.

The idea of finding a way to let nature produce Ampi and Amox surfaced very early, and is logical. The penicillin nucleus is a natural product itself; maybe the synthetic side chains aren’t naturally occurring amino acids, but they resemble them much. Moreover, by now we found both amino acids in natural products. In sum, the genetic information is available in principle for a bio synthesis (a fermentation as is industrial common practice now for almost all naturally occurring amino acids). That will facilitate a complete bio synthesis of Ampi and Amox. But the efficiency and quality of existing industrial processes are very high; therefore, the economic gain of a fermentative pathway will be limited; whereas the development of such a process could be a lengthy and costly endeavour. For Ampi, with a dwindling market, that will certainly not be profitable. If the market for Amox keeps on growing, an industrial bio synthesis could become profitable. Moreover, the metabolic pathway for the side chain para-hydroxy phenyl glycine is well-known and available now. 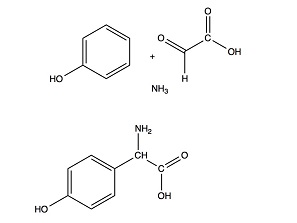 Increasingly, we have gained insight into natural processes and the way in which enzymes produce natural products. Somehow, that has had a major influence on production processes for all semisynthetic antibiotics. The most costly and most critical steps in all syntheses are the removal of the natural side chain of the penicillin or cephalosporin nucleus, and the application of the new side chain. Already in the early stages of the chemistry and biochemistry of penicillin, researchers looked for an enzyme that could do the job. In the naturally occurring pathway to Pen G in the mould, such an enzyme applies the side chain. Many moulds and bacteria produce such enzymes.

In the eighties, researchers succeed in obtaining this enzyme in its pure form. By introducing the corresponding gene in the well-known E.Coli for example, we can optimize production at an industrial scale. If we let the enzyme be absorbed on rolls of a non-soluble carrier, we can very well process Pen G to 6-APA. The rolls are suspended in an aqueous solution of Pen G (at an appropriate acidity). The enzyme does the job and will be simply sifted from the mixture for doing the next job. From the filtrate, we can obtain 6-APA in crystalline form by changing the acidity. From about 1990 this is standard practice in industry. There are major advantages on the chemical pathway. The vulnerable penicillin nucleus hardly disintegrates, because the molecule is being kept in almost natural conditions during the entire process (aqueous solution, no solvents, mild temperature, mild acidity). 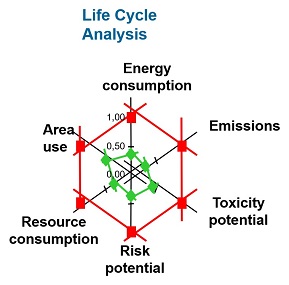 Biocatalysis (in green) has drastically improved the footprint of all important penicillins and cephalosporins.

This enzymatic process for the production of 6-APA from Pen G is one of the very first successful applications of isolated enzymes on an industrial scale. During the latter 25 years of the past century, scientists discover how efficient, selective and subtle enzymes do their jobs. That kindles the idea in chemists to use enzymes as well for their (often non-natural) processes. We have known for a long time now that enzymes can produce or break up many different chemical bonds. The challenge then is to isolate these enzymes from nature, produce them at a large scale and then stabilize them for repeated industrial use.

This is the start of biocatalysis, from the ‘80s onwards. Enzymes are being used outside their natural environments for a growing number of industrial processes. By now, we can manipulate enzymes to the extreme, using all knowledge and techniques from molecular biology and biotechnology. Therefore, we can think up biocatalysts for almost every process. We can now also stabilize these catalysts and offer them for use in a large number of chemical reactions. Petro chemistry has obtained mastery of its well-known metal catalysis; now fine chemistry has mastered biocatalysis. This allows us to produce the intricate molecules of medicines under mild conditions. And even a growing number of natural, semi-natural or even unnatural products, on a large scale. 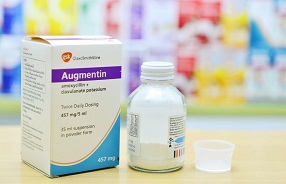 Augmentin, the most successful application of Amoxicillin. Photo: Shutterstock 631106861.

A general principle of catalysis is that the catalyst promotes the required reaction but doesn’t change itself (often, in practice this isn’t quite the case); moreover, it acts reversibly. Meaning: the reversed reaction also can be propelled by the same catalyst, biocatalyst or enzyme. Therefore it is a logical step, in the production of semisynthetic antibiotics like Ampi and Amox, to try and develop the enzymatic pathway for coupling the 6-APA nucleus with the new side chain. It is the reverse process of the removal of the natural side chain of Pen G, discussed earlier. Around the turn of the century, DSM succeeds as one of the first companies to couple nucleus and side chains bio catalytically in all major semisynthetic pens and cefs. DSM develops much of these (bio) process technological knowledge in cooperation  with Dutch universities.

This bio catalysis contributes much to the improvements in process efficiency mentioned earlier. The amount of waste falls spectacularly. And there is an unexpected bonus: quality and shelf life of the final products improve a lot. These results have extended DSM’s dominant market position by at least ten years. Until it becomes wise, around 2010, to sell the business to the Indian and Chinese partners – in view of the dominance of the Asian markets. Some 50 years after moving most sulfa productions from Europe to Asia, now it is the turn of the pens and cefs. Time to develop other business.