Quite admirable, the fast development of a penicillin of their own at the Gist. And subsequent developments are at least as impressive. In November 1945 already, the Dutch government poses the question if the Netherlands can become self-supportive. And they can. The Gist and Kluyver are ready for it. Although this is not without its setbacks and difficulties, because of the post-war ‘shortage of everything’.

Project ‘100 years of antibiotics’
Episode 27. Development of penicillin in the Netherlands
Episode 28. The success of Bacinol
Episode 29. The Gist factory, from illegal to global player
Episode 30. Cephalosporins
Episode 31. Help from an unexpected source

Even though conditions are not optimal, shortly after the war, the Dutch government has done its homework. The major importance of penicillin for public health is crystal clear. The supply by the military is insufficient and cumbersome. A visit to the UK reveals that production facilities there are outdated (!) and small-scale. In the US, conditions are very different. Production is in full swing. They decide that the Netherlands needs production of its own. There are three opportunities: production by public bodies (too expensive); by the Gist factory (will probably need a lot of subsidy) and by Shell, who claim that they have access to all necessary knowledge and patents (is that really true, and can they really transfer that to the Netherlands?). And then, there is the persistent story that we will soon be able to synthesize penicillin, even if we still don’t know its chemical structure.

Early 1946, discussion within the government concentrates on three points. Quality control and distribution of penicillin by official bodies. Mounting a joint R&D program of universities and companies, modelled after the successful example in the US. And production by Dutch industry. Three candidates are being considered: Gist, Brocapharm and the national technology institute TNO. The contribution of Prof. Westerdijk of CBS in Baarn to these discussions is of major importance. Brocapharm is included in the shortlist because of the success of their Expansine. 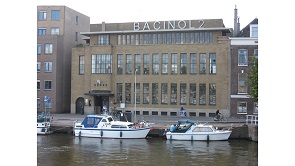 As government considers its case, businesses investigate opportunities for large-scale production. Gist and Organon in Oss try to develop a cooperation; with production in Delft and marketing by Organon. The archives show that Organon has blown its own trumpet on its expertise in penicillin (at CBS they doubt if they ever have had any product in their hands). Moreover, they underestimate Gist’s expertise. Both parties agree however that government should not be involved. And that a joint program with universities would carry too many secrecy problems with it.

The Kluyver archive shows that Kluyver quickly reinvigorates his pre-war network. The extensive correspondence shows a heart-warming cooperation by his colleagues and former students in the UK and the US. In December 1945, he already visits an international congress in London, together with professor Westerdijk. By the end of 1945, he has in his possession all articles and books on penicillin that he missed during the war; and samples of various industrially used moulds. Even more important are the reports about penicillin producing companies. In the end, this leads to cooperation with the British/American penicillin consortium. Kluyver is also informed of the discovery of streptomycin. Some correspondents refer to Kluyver’s connections with Gist, even though he doesn’t refer to them himself.

Gist from their part send someone on an 8 months (or longer) mission to the US. Querido goes as well to collect information, also on request of Gist. He contributes to the flow of information, new subscriptions and samples. This, on top of all information coming from Kluyver, quickly brings Gist up to date with regards to international developments.

In November 1946, everyone is fully available again, and informed about developments. Among others on request of Waller of Gist, Kluyver goes to a congress in Paris at the occasion of the 50th anniversary of Pasteur’s death; also in order to meet (Sir Alexander) Fleming. He hands him samples of Gist’s penicillin, with the request to have it analysed by Glaxo. They do so readily, and conclude that the Dutch penicillin is of the same quality as the British and American varieties.

In 1945/46, the question surfaces again and again if and how penicillin can be produced in the Netherlands on a commercial scale. After the failed negotiations with Organon, the Gist decides to go its own way. They have all expertise required at hand. And having experience in yeast fermentation, scaling up should be achievable. The close connection with Kluyver and Delft Technical University on fermentation techniques boosts self-confidence. They don’t fear that chemical synthesis should win in the end. In financial terms, they have a lot of space for action; for yeast and vitamin C production during the war years has raised sufficient cash. In view of the need for penicillin, both in the Netherlands and worldwide, they judge at the Gist that the product will sell and promote itself. In August 1946, they announce this project in the company’s newspaper.

It is not an easy task to stage an entirely sterile production at some volume – and certainly in 1946, it wasn’t. The experience with yeast production is of no use here, because unwanted infections hardly play a role there. And sterile operations are all the more difficult as they choose to use fermentation of the mould immersed in water in stirred and aerated tanks, inspired among others by the results of the Kluyver flask. They know about the many problems that the Americans have had with this. A small bunch of dedicated ‘engineers’ solves all problems while improvising. Working under sterile conditions and new sterilization techniques are being developed in-company.

Gist buys other equipment, like a centrifuge from Nutricia, a sieve from a sugar factory and a stainless steel reactor from a local machine factory. In the end, Gist buys a machine factory of its own, the Leidse Apparaten Fabriek. We suppose that this decision has been led by the need for secrecy. In the US, corn steep liquor is the successful growth medium for the mould; in the Netherlands they can easily equal this with cornflour obtained from Honig in Koog aan de Zaan (ordered there in the name of Delft Technical University). As for the strain of penicillin mould, they obtain comparable results with Penicillium notatum, Penicillium chrysogenum and Penicillium baculatum; that testifies once more to Gist’s prowess from the start onwards.

In June 1946 Gist starts to sell penicillin, and from that date onwards demand soars. The factory has at its disposal one fermenter of 1,500 litres that can produce one batch each week, sufficient for 1,000 ampoules. After a year they add a 6,000 litre reactor. Authorities confine themselves to distribution and quality control. There is no need at all for financial support. Because supply of foreign currency is tight, penicillin imports remains at a low level.

In 1947 already, Gist can fulfil all Dutch hospitals’ requirements. A year later, they cover the entire Dutch demand. Although that isn’t quite high yet, because most GPs are bothered by the need to inject their patients every four hours. From 1949/50 already, the company can export some of its production. Among the possible targets are Indonesia, Rumania, Belgium, Spain, Turkey and Egypt. In 1973, thirty years after the start of Kluyver’s research, the fermenters have grown to 200,000 litres; Royal Gist-Brocades then serves 15% of the global market.

From yeast to medicine

The merger with Brocades is the start of Gist’s interest in more than bulk production of penicillin. They now also embrace formulations, distribution and information supply to doctors and the general public (after an aborted plan to do this together with Organon). A newly erected ‘think tank’ Medical Brains Trust devotes itself to these issues. It hosts well-known names like Waller, Kluyver, Querido and Willem Goslings. They start publishing a magazine of their own, Digesta Antibiotica. In 1949, the think tank has convened for 50 times already. The meetings are continued until 1966. An excellent source of information is a 365 page book, Penicillin therapy and control in 21 Army Group; with lengthy descriptions of the results from the invasion of Normandy onwards.

How crypto has a real-world impact and helps to shift the narrative from 2022 frauds to a force for positive change and an accelerant towards a more #sustainable, #lowcarbon economy. coindesk.com/consensus-maga…

LIVOLTEK Grid Tied inverter has processing #intelligence, enabling it to know when power delivery is necessary and when it is not, thus reducing your #electricity bills. LIVOLTEK - Power Your Home With Safe & Green & Efficient Power. #livoltek #Green #solarenergy #sustainable pic.twitter.com/00Ifpr0cX2

Rebel with a Cause Fashions
@RebelWACauseF