A new book by journalist Don Saladino draws our attention to the unification of eating habits across the world. It carries major dangers for our food crops. The genetic variation in the world’s food crops is diminishing very fast. 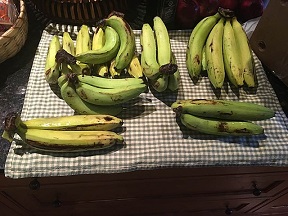 The downfall of the Gros Michel

Take bananas. There are more than 1,500 different varieties of banana in the world. But global trade is dominated by just one, the Cavendish. As long as it lasts! For Cavendish’s predecessor, Gros Michel, was almost wiped out by the Panama disease, caused by a fungus, in the 1950s. A new variety, the Cavendish, seemed immune to the fungus – but from 2008 onwards it appears to be vulnerable as well. In the end, this variety might meet the same fate as the Gros Michel.

Now this may not be a very shocking story. Large parts of the world might well do without bananas. But breeding a new variety will take some time. Growers, traders and consumers will want a variety as productive and tasteful as the Cavendish. Even if we should go through a time with less (i.e. more expensive) bananas, there will be no global famine. And then, wild bananas have survived; we can use them fort breeding new and stronger species. The genetic pool from which to breed new varieties is still largely intact. 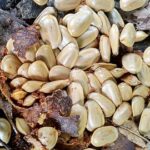 All this might be entirely different if it comes to staple food. Where mankind has caused an unprecedented reduction in genetic variety in just a century and a half. As Saladino says in The Guardian: ‘the source of much of the world’s food – seeds – is mostly in the control of just four corporations; half of all the world’s cheeses are produced with bacteria or enzymes manufactured by a single company; one in four beers drunk around the world is the product of one brewer; from the US to China, most global pork production is based around the genetics of a single breed of pig (…). This level of uniformity has never been experienced before.’

Yes, our personal diets may have become much more varied. Wherever we live, we can now tap from many traditions. We can eat in the European or American tradition, in the Chinese or the Indian one. But here is what matters to global diversity: we can now do so almost anywhere in the world. ‘Diversity’ has spread to such an extent that the world of food has become much less diverse.

As Saladino writes: ‘of the 6,000 plant species humans have eaten over time, the world now mostly eats just nine, of which just three – rice, wheat and maize – provide 50% of all calories. Add potato, barley, palm oil, soy and sugar (beet and cane) and you have 75% of all the calories that fuel our species. As thousands of foods have become endangered and extinct, a small number have risen to dominance.’ Take soy. Until the 1970s it was virtually unknown outside Asia. Now it is one of the world’s most traded agricultural commodities. It is not just humans who eat soy – it is also fed to our pigs, chickens, cattle and farmed fish.

And then, Saladino says, within each crop there has been a major loss of diversity as well. One of the main instruments to cause this loss was the Green Revolution. In an attempt to save millions from starvation in the ‘50s and ‘60s, scientists promoted very productive varieties, that grew well on a lot of fertilizer. ‘Thousands of traditional varieties were replaced by a small number of new super-productive ones.’

But then, as with any loss of variety, this causes a major vulnerability to disturbances. What can we do if the predominant varieties of wheat or rice come under attack of a fungus, as we have seen with bananas? Will we have equally productive but less vulnerable alternatives at hand? Probably, the answer is no. We would have to return to the wild species. There we would have to find varieties resistant to the particular problem at hand. Then, breed the genes responsible for that into a productive strain. Probably by genetic engineering, by far the quickest technology in this field. Even so, this will take many years. Will we still be able to feed the world in the meantime? 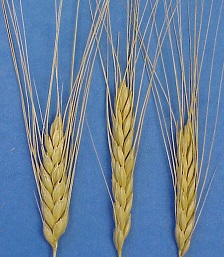 Protect our food crops and plates

We need to protect and cherish the food crops that are under threat of extinction. Likewise with traditional varieties of our major crops. Saladino starts his article in the Guardian by recounting that he ran into an endangered species of wheat in the high plains of eastern Anatolia (Turkey), called Kavilca. It is perfectly adapted to its environment. It can thrive in conditions so cold and damp that modern food crops are guaranteed to fail. If we should ever have to call on a variety of wheat with these characteristics, we need to have Kavilca at hand. But there are just a few fields of it left. This variety has grown there for 10,000 years, 400 generations. In 6 generations, it has almost gone extinct. Like bere barley, perfectly adapted to the climate of the Orkneys, islands North of Scotland. And murnong, a nutritious root from Australia. Many other varieties have disappeared already – so we need to act now.

It’s not just widlife that is at risk of dying out, the world’s food crops are in rapid decline as well. Since the 1960s, there is the red list of endangered species, both animals and plants. Compiled by the International Union for Conservation of Nature, with nearly 30,000 species at risk of extinction. In the mid-‘90s, the Italian Slow Food Movement took the initiative to create the Ark of Taste. Consisting not just of food crops or local products, but also of prepared foods. At the moment, Saladino writes, the Ark contains 5,312 foods from 130 countries, with 762 products on a waiting list ready to be assessed. Each one of us can help to save foods that are endangered in our area, whether an apple variety or a local cheese. They are worthwhile to be conserved. We need to conserve our foods. Not just as a form of insurance; for the pleasure of eating as well.