Often, because of shortages of penicillin, the Oxford team has to suspend or modify its animal tests or clinical programs. Shortages not always overcome by penicillin recovered from urine. War conditions force them to improvise a lot. Much transportation is done by bike, often in the dark with very little illumination. 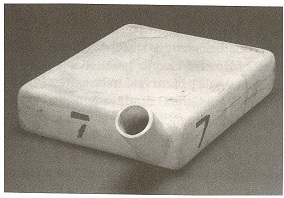 Heatley needs to work hard again in order to raise his output: from hundreds of litres of brewing liquid per week yielding 100 milligrams of brown powder, to thousands of litres for amounts of several grams. He succeeds in four months’ time. By the end of 1940, he has at his disposal several hundred ceramic bedpans. Of a design of his own, equipped with a handle and a spout, glazed on the inside and rough on the outside, in order to prevent sliding. It is a rectangular container measuring 28 by 22 cm, and 6 cm deep. They cost 6 shillings each. Heatley needs to travel in bizarre conditions to the potter in Stoke-on-Trent and take them to Oxford. All road signs have been removed, in order not to help the Germans find the right direction in case of an invasion.

It is Christmas 1940, and the team starts the first 76 incubations in the new pans. They work in shifts, 24/7, assisted by female ‘penicillin helpers’, six of them eventually. The work conditions are up to par, considering wartime, but primitive nevertheless. They have substituted the very inflammable and volatile ether with amyl acetate. Less volatile, still inflammable but with an agreeable pear odour. The girls are under strict medical surveillance and get administered regular doses of ferrous sulphate, in order to prevent any anaemia caused by amyl acetate. They get along well and they all are well aware of the major importance of the project that they work on. On New Years’ Eve 1940, Heatley writes in his diary that in one years’ time, production has increased a thousand fold.

In January 1941, they can finally start clinical tests: volunteers and/or patients taken terminally ill. The first subject is a terminally ill cancer patient. A treatment with doses of 100 milligrams of penicillin appear not to cause her any negative effects. The first real patient is Albert Alexander, a policeman. When he pruned his roses, he sustained several scratches. They are badly infected with strepto- and staphylococci, that in course of time have spread to his eyes, lungs and face. He has been given up. He is administered a first dose of 200 mg (the highest to that date), followed by a number of doses of 100 mg. These carry miraculous results. After two days of treatment he seems to recover entirely. For ten days, his condition remains rather well and stable. They collect his urine. The team uses its penicillin and a few rests from elsewhere for the treatment of a 15 year old boy suffering from blood poisoning. The latter survives, after some relapses. But unfortunately, Albert Alexander doesn’t. After his ten days in relatively good health, the infection returns; but now there is no penicillin available anymore for further treatment. He passes away, a month later. Learning points: penicillin can cure human beings as well; but we should carefully plan and finish the cure. They badly need to scale up. Florey starts to think in terms of kilograms.

In principle, the team has answered three research questions

For the time being, the researchers have now found answers to three of the four major research questions, by the middle of 1941.
1. How do we grow as much mould as possible, while maximizing penicillin production?
2. Which harmful bacteria will be attacked by penicillin?
3. Are there any harmful effects of penicillin on the body?
4. What is the chemical structure of penicillin, and what is its modus operandi?
They still need to do much more, but the results are overwhelmingly positive and the prospects are most exciting. War conditions dampen any feelings of joy. But important events are still to follow.

The fourth question has been just barely answered. The team does have some kind of answer on the question for the modus operandi. The substance pinches holes in the cell walls of many toxic bacteria; these either die or cannot reproduce any more. In our bodies, all cell walls are composed of another kind of material, that can withstand penicillin. The team also finds the first signs of the emergence of resistance. But the main question is what on earth might be the structure of penicillin. If the researchers could unravel that question, they might also know why the molecule is so unstable. Then they can investigate the possibility of a chemical synthesis, without all the cumbersome hassle with moulds and complicated extraction processes. And again, this search is a very exciting adventure; with fierce arguments between (later) Nobel Prize winners. The scientists are divided into two camps, each with a proposal for a chemical formula for penicillin. 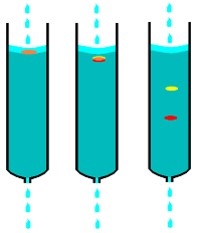 Separation and purification by column chromatography.

Penicillin still has to be purified

In order to establish the composition and structure of a compound, one needs to have a pure product in hand. The brown powder is still a far cry from such a pure compound. It is, in fact, a small miracle that it doesn’t have any nasty side effects for the patient. The researchers use chromatography as a first step in purification; at that time a new technique for separation of a mixture of compounds. We can see chromatography at work if we apply some ballpoint ink on a wet newspaper and then look at the various rings that appear. The ink contains a number of dyes that all react differently to the moving water and the newspaper’s paper fibres. As the water migrates further, it also further separates the dyes; paper chromatography.

Ernst Chain doesn’t use paper but a glass column filled with alumina (he could have used sand or silica gel instead), soaked in water or another solvent (like alcohol, ether or acetone). He first places some brown powder on top of the column, dissolved in as little water as possible. Them he opens the tap at the bottom of the column and adds solvent on the top. In course of time, the solvent descends; it takes with it the various components of the brown powder, at different speeds. All just like the principle of the ballpoint ink on the wet newspaper. The column can exist of various solids instead of alumina; and there is much choice in solvents as well. Much choice for experimentation, with the aim of perfect separation. Careful removal of the column from the tube will produce a number of disks, each with a different absorbed compound. These disks can be analysed or put to further use. At first, the Oxford team doesn’t succeed in producing pure penicillin; but they do succeed in purifying the brown powder, removing many impurities before the medicine is being administered to the patient.